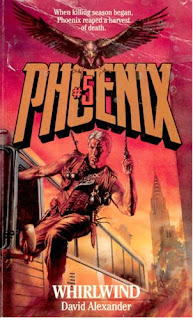 Here endeth the grisly, gruesome, gore-tatstic Phoenix saga, the OTT chronicle of Magnus "Phoenix" Trench's quest across the nuked US. The previous three novels progressively derailed from the overriding plot as established in the first volume, Dark Messiah -- namely, that Trench was rabid to get from San Francisco to New York City to determine if his wife and son survived the nuclear holocaust -- but happily this final volume gets things back on track.

And just as happily, David Alexander is back to form in this final outing. Whirlwind is nearly as violent and demented as its predecessors; not all the way up there with the first installment and Ground Zero, but close. But on the positive side this volume features more of a focus on the major plot: after being absent for too long, Trench's archnemeses John Tallon and Luther "Dark Messiah" Enoch finally return to the fray.

Whirlwind opens with another of those crazed Alexander action scenes; Trench and his companions from the previous novel, Raven and DeLaCour, arrive in NYC and must brave a guantlet of heavy weaponry and government soldiers to get into the city. Raven and DeLaCour by the way are pale reflections of their previous selves. Raven's ballyhooed psychic skills go unmentioned -- as indeed does her ESP link with Trench, as established in the final pages of Metalstorm -- and there's no indication that she and Trench were once involved. I think she has maybe five lines in this entire novel. DeLaCour isn't much better. The hulking, steel-plated character comes off more like Trench's familiar, there to save the guy and battle alongside him. Hell, even the wolf Blue from the previous novel is gone and doesn't get mentioned.

Trench is caught, and Tallon shows him that his wife and son are held prisoner, hooked to life-support machinery, inside the Statue of Liberty. This scene, so long built up in the series, is glossed over in a paragraph. The intimation is both Trench's wife and son suffer from the Plague that has affected the rest of the country, product of the biochemicals in the Soviet nukes that hit the US; the Plague Trench himself is immune to. But Alexander leaves this vague. Tallon informs Trench that a mutant has been born in NYC that can heal the Plague. Trench must find it and bring it back, and in exchange he and his family can go free.

So like a regular Snake Plissken Trench crosses alone into the no-man's land of Manhattan. Here follows another great setpiece which comes off like a more gory variation on the famous scene from Stephen King's The Stand, where Trench puts on night-vision goggles and ventures through an abandoned subway station. Alexander certainly has a gift for dark humor; after building up Trench's shock that no "Contam" mutants have yet attacked him -- Trench realizing of course that the mutants dwell underground, just like the C.H.U.D.s -- about a million of them come out of nowhwere and attack him.

The action scenes are as expected OTT and like super-violent cartoons. Leather-clad gangs rule Manhattan -- every city Trench has visited has been run by a leather-clad biker gang -- and Alexander really comes to life when Trench blows them away:

The burst caught Badass One high on the chest, stitching a diagonal line of ragged punctures from his left shoulder to lower jawline that changed him from vicious prick to Moby Dick as he spurted a dozen whale spouts of blood.

As death reflexes made the muscles twitch and jerk, the crude dude went into a terminal breakdance that ended when his legs kicked out from under him and he slid down the side of the mountainous pile of wreckage on his face, splattering his pard with intestinal guacamole.

Again Alexander takes a cue from the ancient world: Trench is captured by Abraxas, ruler of NYC and basically a clone of Lord Humongous from The Road Warrior. Abraxas has set up the Clone, a death-trap constructed in "Blastroland" from an old Ferris Wheel and roller coaster. Trench is strapped in and must survive all manner of booby traps, pursuing killers, and guys with flamethrowers. And if he lives, Abraxas will take him to "The Child," ie the mutant with the Plague-stopping powers.

The nihilism of previous volumes is brought to the fore here. As in the past Trench muses to himself about man's inhummanity and etc. But also it's been clear from the get-go that there could be no happy end to the Phoenix saga. How could there be, given the nonstop gore and carnage? But what's most unfortunate is we realize in the last pages that, though this was the last published volume of the series, it sure isn't the end. For nothing is resolved. Trench's wife and son are still the prisoners of Luther Enoch and John Tallon, both of whom escape, once again leaving Trench a lone man consumed with vengeance.

So yes, the series ends on a cliffhanger, with Trench standing in the head of the Statue of Liberty and looking out at the ruins of NYC, knowing that he will pursue Enoch and Tallon to the ends of the earth. I have many questions about this -- either Alexander chose to end the series on a vague note, or Leisure Books just cancelled it due to low sales and Alexander never had a chance to compose a proper finale.

As mentioned in my review of Dark Messiah, Alexander recently e-published all five volumes of the series as a single e-book, Phoenix Rising, but unfortunately he didn't take the opportunity to write a new and closing volume for the series. Who knows, though; maybe if enough fans pester him he just might write one.

Even though this is the end of the Phoenix reviews, I'm not yet done with Alexander -- the guy wrote several other men's adventure series under his own name and psuedonyms, and I will be getting to them soon.
Posted by Joe Kenney at 6:30 AM

Super unsatisfying! I guess that's the nature of publishing these series. He probably was hoping to get a contract for a sixth book, but the sales ended up not justifying it.


You do a great service to society with these reviews. I thank you.

Thanks for the note! I'd like to get the full story on Phoenix someday, but I suspect you are correct -- low sales probably killed it.

From vicious prick to Moby Dick. Film at 11.