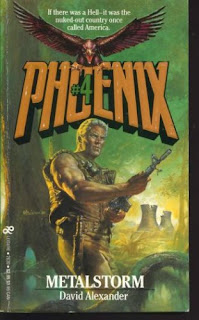 I get the feeling that David Alexander was growing weary of his Phoenix saga; this penultimate volume, while occasionally heavy on the gory and spectacular violence we've come to expect from the series, is a hodge-podge of various plots and ideas. Metalstorm constantly changes direction from beginning to end, so the reader has no idea what's in store -- usually a good thing, but here it's more of a sign that the author is trying to keep himself entertained.

And can you blame him? The first volume alone was already the most OTT blast of carnage-fueled post-nuclear action ever published; how in the hell could David Alexander top it? The answer is he couldn't. Once you've written a few volumes which feature Magnus "Phoenix" Trench blasting away punks in violent and novel ways you obviously have to stretch things to keep it all original, or at least somewhat fresh. So what Alexander has done here is basically just toss in several ideas that have stricken his fancy.

For one, Metalstorm opens with a flashback to Nazi friggin' Germany, strange enough given that the series so far has occurred in the post-nuke USA of 1989. It takes a while, but this prologue eventually pans out. From there it's to our hero Trench, who still hasn't made it to NYC to find out if his wife and son survived the nuclear blast. In fact, Trench has had to go far out of his way, down through Louisana and on through Texas, to get to New York -- the new government's military is blocking his path, and they of course want Trench dead or alive. So Trench is now working his way through the mutant-filled swamps of Louisiana. After a near-death experience Trench hooks up with Raven, a dark-haired beauty with psychic powers, and her pet wolf Blue.

The three head on into Houston, where Raven wants to find a guy named DeLaCour; Raven explains that as part of her CIA-funded psychic "remote viewing" activities she's learned that a gold-carrying ship crashed somewhere in the gulf. She wants to scrounge up the gold and make off to a place undamaged by the nukes. Phoenix agrees to help but he and Raven are separated by a freak sandstorm moments after entering Houston. Alone again, Trench decides to find Raven -- why he doesn't just head on for NYC is glossed over; he has of course slept with Raven a few times and wants to save her if possible.

From here the novel becomes more like the series we have enjoyed, with Trench blowing away various punks in gory fashion. Houston is run by the fabulously-named Runamok, a gangbanger who has installed VCR technology into the heads of his underlings; with the press of a button Runamok can make people follow his commands, go crazy, or even kill themselves. DeLaCour is one of these sufferers -- it turns out DeLaCour is a big guy with metal plates sewn into half his chest and half his face -- and for new sport Runamok has Trench and DeLaCour fight in "Metalstorm," Runamok's variation on the gladiatorial combats of Imperial Rome.

The novel changes direction again in an ultraviolent sequence in which Trench and his new comrade first must kill legions of attackers with their bare hands, then employ submachine guns on a second batch who come at them on motorcycles. After setting up Runamok Trench and DeLaCour are able to go free -- Runamok has sold Raven to a Gulf-raiding pirate named Havock. With the wolf Blue in tow, the two men head down to Galveston, where Alexander takes the time to rip-off/pay tribute to the famous scene in The Road Warrior where Mad Max handcuffs a dude to a car that's about to blow and hands him a hacksaw.

Plot #3 features Trench and DeLaCour now posing as new members of Havock's nuclear-sub riding pirate crew. Not once, mind you, has Trench even asked DeLaCour how he knows Raven; Alexander just pushes his pawns along the board and makes them follow his orders without question. At length Trench frees Raven and all three of them, along with the wolf, make their escape.

Now plot #4 comes along: Raven admits she was lying all along. The plane that crashed was actually a Nazi ship (aha! the prolouge!) that was transporting an "Atlantean crystal" of supernatural power. Here the novel takes on the fashionings of a survival tale as, while scuba-diving for the wreckage of the Nazi plane, Trench and Raven are attacked by a giant squid and some sharks. At length they find the crystal, which as Raven explains was created in a time before history, furnished as it is with more power than a nuclear arsenal. We are well beyond the gory post-nuke world of the previous novels by this point.

But the pulp sci-fi continues. Havock gets hold of the crystal and, like some sort of Fu Manchu, harnesses its power and starts firing lightning bolts from his fingers and eyes and whatever. But it's anticlimatic because the battle just sort of fizzles and Trench is caught, taken back onto Havock's sub. Havock decides, apropos of nothing yet revealed in the novel, to nuke a city, any city; he decides upon NYC. Trench then finds himself chained Gravity's Rainbow style to a missile about to be launched. But there's Raven, employing her psychic link with Trench at the last moment...

Yeah, this is one slipshod novel. Even the insane gun-porn and inventive gore of the previous installments is mostly absent; it's there to be sure, but toned down. I get the suspicion that Alexander didn't intend this to be an ongoing series. Perhaps Leisure Books talked him into it, who knows. But at any rate the next novel was the last: Metalstorm ends with Trench finally vowing to get to New York City, where he will find his family and square his accounts with Luther Enoch and his sadistic new government. To say I look forward to this finale would be an understatement.
Posted by Joe Kenney at 6:30 AM

"...the famous scene in The Road Warrior where Mad Max handcuffs a dude to a car that's about to blow and hands him a hacksaw."

It's from Mad Max, not The Road Warrior.

Tex, thanks for the comment, and all the others you've recently posted. Sorry to appear to be ignoring them, but I've just gotten back from vacation and haven't had much free time. Thanks too for pointing out my Mad Max/Road Warrior screwup -- that's what I get for not bothering to fact-check myself!

Not a problem, Bro. I vaguely recall something about this "vacation" you speak of (overheard a conversation once.) Heh, seriously, I'm glad somebody got some vacation time in.

Now the big question is--did you get any reading done? Or would that have been considered work?

Anyhow, I'll pop up in future if I have anything interesting (?) to say. You certainly read the kind of stuff I dig.

Tex
(who just finished reading your blog from the beginning, and looks forward to more reviews)

Dammit I do so hate those East Texas sand storms...