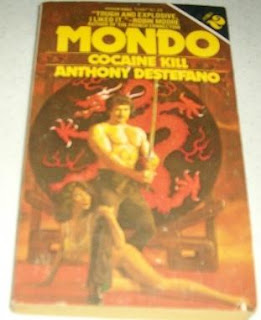 Anthony DeStefano's Mondo was one of the best novels I read last year, a grim and gritty blast of what I like to call "bell-bottom fury." So it's with much dismay that I report that this follow-up, published two years later, just can't compare with that earlier volume. In fact, Cocaine Kill, despite having a great title, is mostly a tepid bore.

As I mentioned in my review of Mondo, that novel easily worked as a standalone, which it apparently was -- I mean, not to spoil it for anyone, but Mondo died in the last sentence of that novel. So it's quite strange that DeStefano and/or Manor Books decided to bring him back. And though DeStefano opens Cocaine Kill with Mondo on the same hospital bed upon which he died, he glosses over the man's actual death and just has him recuperating from the massive (ie fatal) wounds he suffered in the climax of Mondo.

Otherwise this is a straight-up sequel, with DeStefano determined in the opening chapters to tie up every loose end leftover from the first volume. To wit, Mondo gets out of the hospital, reconnects with his Japanese martial arts teacher, Kikasa, and then goes to find his lady from the earlier book -- the lady he pushed away. This is in reality a fluff scene, with no bearing on Cocaine Kill; indeed, someone who had never read that first volume might wonder what the hell's going on. Because the lady's moved on, and tells Mondo so. And unless he or she is reading Cocaine Kill immediately after Mondo, the reader too has moved on, so this whole sequence is pointless. The unfortunate part is this pointlessness only serves as a precursor to the pointless padding we will endure through the remainder of the novel.

Another of those loose ends is the Chinese martial arts master hired in Mondo to kill our protagonist. Mondo swears vengeance and the two arrange a fight to the death -- a veritable Mortal Kombat, if you will. But then we get lots and lots of background story on the Chinese thug himself. This happens often in the novel; every time a new character is introduced, DeStefano spends several pages recapping his or her life, with tons of incidental and needless detail. The fight occurs and though Mondo is outmatched we must remember that he fights dirty, packing heat and using it despite the "hands and fists" nature of the battle.

The outcome is, the Chinese thug was the head enforcer for a Triad, and as a sign of respect for the deceased, Mondo promises to carry out an important hit for the Triad, acting as their temporary enforcer. The hit is a black American named Jacque Ku Khan, who is moving into Triad territory. Khan's own enforcer is Turk, a hulking Puerto Rican who is fond of using a straight razor on his victims. So begins a cat and mouse game between Mondo and Khan, with Mondo posing as a drug dealer in the ghetto and Khan instantly knowing who he is.

The only sequence in the entire novel that matches the first volume is when Khan's men forcibly hook Mondo on heroin during interrogation. After escaping, Mondo finds an old friend, a former junkie who helps others get clean. But when the man isn't home, Mondo handcuffs himself to a tree to tough it out until the man gets back.

What's missing here is the brutality of that first novel. As I wrote in my review, Mondo was very much like a grindhouse film on paper. It was a no-holds-barred blast of lurid entertainment. And though Cocaine Kill has similar bits every so often, it just fails to match up. Too much of it is given over to background data on various minor characters, and Mondo himself is lost in the clutter. He's still a bad-ass to be sure, more villain than hero, but he too is a pale reflection here of his former self. For example, in this one he's easily fooled by Khan's moll, a gorgeous black lady who gives herself to Mondo but then sets him up. This would not have happened in Mondo. But then, he did die in that novel, so I guess we should cut him some slack.

DeStefano wrote one more volume in the trilogy, which I have; let's see if it takes me another year to get to it.
Posted by Joe Kenney at 6:30 AM

This was the first Mondo I read, and I liked it enough to send me seeking out the other two. I've read the third one, so the first one's the only one I haven't read yet. So, I'm kinda glad to hear this was a letdown after that, because, since I liked this one, the first one must REALLY be good! :)

C'mon. The guy's sensei isn't REALLY named "Kikasa", is he?

I just bought MONDO #1 and i can't wait to read it. I actually read it as a kid about 19 years ago, and remember loving it. Do you any info on who Destafano really was? Would love to know more about the man.

Fern, thanks for the comment. Mondo #1 is a great book, hope you enjoy it. DeStefano was a real guy...he was an artist, too, and did the covers for the Richard Blade series from Pinnacle Books (ie the fantasy-esque series published under the house name "Jeffrey Lord").

DeStefano published several standalone novels, including some in the horror genre (one of them, "Sorceress," I have and plan to read eventually).

The last book of his I know of is from 1983: The Predator, which DeStefano published under the psuedonym Anthony John.