The Gladiators, by Martin Saul 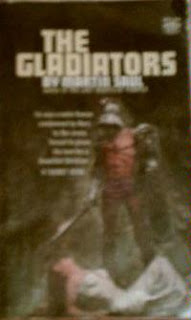 The Gladiators, by Martin Saul
Signet, 1967
In 1966 Martin Saul published The Last Nights of Pompeii, which I reviewed here, a slim book set in the post-Nero era of ancient Rome. In 1967 he followed that up with this novel, just as slim, a tale about a Roman citizen turned gladiator during the era of Nero's rule. I'm guessing Saul was Australian, as the book is copyrighted by some publishing house based in Australia - this Signet paperback was the first and only US edition.
Much like the previous novel, The Gladiators is basically a love story. Scaurius is the main character and narrator, Scandinavian-born but raised Roman. Just returned from warring with Vespasian in the East, Scaurius notes how decadent Rome has become under Nero. Already feeling like an outsider, he gets in more trouble when he comes across a beautiful young woman who happens to be Christian. She's on the run from the Emperor's men; Scaurius of course falls in love with her, and after various mishaps he ends up in prison with a bunch of Christians, awaiting execution in the arena.
Scaurius convinces his captors - including Nero - that he is not a Christian. At length they concede he might be telling the truth, but they keep him locked up. Only now, rather than just becoming lion-bait, he will battle as a gladiator. The second half of the novel is a series of repetitive gladiatorial matches, Scaurius usually up against a lion or three, until the last event, in which he faces off against professional gladiators. It's all very underwhelming, despite the setup.
And again much like the previous novel, The Gladiators is just underdeveloped. Scenes aren't played out to their full potential, and the narrative rushes to the conclusion. Characters as well are underdeveloped; I had a hard time buying Scaurius's sudden love for the Christian girl. And speaking of which, whereas The Last Nights of Pompeii at least strayed clear of the Christian glurge which permeates most historical fiction set in this era, The Gladiators at times revels in it, with Christians blathering ad naseum about the wonders of their faith and the sinfulness of the Romans. Saul tries to skirt this, with Scaurius not wholly buying into it all, instead coming to a New Age understanding of "one god" who stands behind all religions. I did appreciate how despite all of that, Scaurius still has no qualms with butchering his opponents in the arena and ridicules the Christians for their pacifism.
What's funny is that the novel wraps up with a three page denouement, told in summary, in which Scaurius leaves Rome and ends up in his homeland of Scandinavia, where he eventually founds a royal line. It turns out he's the son of a king, of course, and he names his son Beowulf - the idea being that he is the Beowulf of the saga. This three page denouement is more interesting than the story told in the novel itself! Yet Saul brushes over it as an afterthought; further proof that this novel was underdeveloped.
Posted by Joe Kenney at 10:16 AM