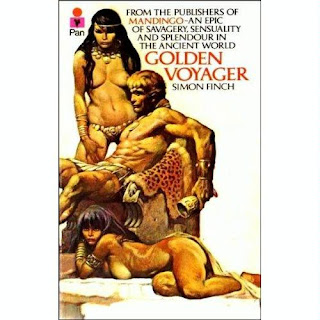 Published in 1978, Golden Voyager was Simon Finch's first novel, and also the first in a trilogy concerning main character Vesuvio and his adventures around the Roman Empire during the reigns of Trajan and Hadrian. The novel is of course an epic, with Vesuvio cast about into a variety of locales and environments that would even have Ben-Hur envious. According to the "About the Author" page, Finch was 32 when he published the novel, and in his spare time travelled the globe giving lectures on ancient slavery. It's a living, I guess. But truth to tell, Finch's knowledge on this subject is put to good use in Golden Voyager, lending a grim note of reality to what is otherwise your typical pulp-fiction male fantasy of purple prose.

The novel opens in 101 CE (strangely, we learn this through Vesuvio's thoughts - that the year is "101 AD according to the Christian calculation," when meanwhile this form of dating wasn't created for several more centuries), with our hero Vesuvio a strapping young lad 18 years of age, a walking mass of muscle, a young man wise beyond his years, his hair a thick mop of blonde (super-rare in Vesuvio's homeland of southern Italy, Finch often reminds us; in fact, Vesuvio's "golden" tresses are what give the novel its title). In other words, the typical lead male character in the typical historical fantasy - super-strong and super-smart, a demigod amongst lesser men. To ram this home even more, we are treated to several scenes where other characters have nothing better to do than sit around and talk about how great Vesuvio is, particularly the size of his "phallus" (more about that later).

Born to a wealthy, aristocratic family, Vesuvio is the firstborn of two sons and thus being groomed for military greatness. In another "huh?" moment, we learn Vesuvio was named thusly after the "recent" eruption of nearby volcano Vesuvius (which covered Pompeii in 79 CE, four years before our hero was born). This would be like naming your daughter "Katrina," in honor of the hurricane which killed so many and destroyed so much. Regardless, Vesuvio is soon to marry his beloved, and has often found himself thinking of her, even when lying with the attractive women amongst the 4,000 slaves his family owns (and trust me, Vesuvio lays with a LOT of women in this book).

Political machinations result in Vesuvio being taken captive by slave traders. Not backing down to the traders on the slave galley, he's thrashed for disobedience and then taken to the captain's quarters (where, even though he's bound and chained and bleeding, Vesuvio still has time to enjoy the oral arts of a female slave...male fantasy at work, people!). Here the reader get a look into the mind of an ancient slave trader, and you realize once again how little life was worth in ancient times. Eventually sold to a pirate captain, Vesuvio spends the next three years working the oars, escaping the Romans and stealing bounty. Here Finch indulges his inner Robert E. Howard, with Vesuvio becoming entangled (so to speak) with the Red Sonja-esque Athana, a beautiful, Hispanic piratess/former gladiatrix who employs Vesuvio as her right-hand man and who discovers that he (of course) is the only man who can satiate her womanly needs.

After a few hundred pages of digressions, with Vesuvio sent from one new master to the next, the plot finally comes together and our hero gains vengeance in Rome. This is a stirring scene, cut whole-cloth from Ben Hur, as Vesuvio challenges his nemesis Gaius Lucretius to a chariot race in the Flavian Ampitheater (rather than the Circus Maximus, where most chariot races were held). The only problem is, despite his being the cause of all of Vesuvio's suffering, Lucretius only appears for about five pages of the novel. Therefore Vesuvio's vengeance comes off as perfunctory; having just met Lucretius (and rather quickly learning that he was responsible for Vesuvio being sold into slavery and having his family being killed), we just as quickly see him get his comeuppance. Imagine if Emperor Commodus only appeared in the final five minutes of the film Gladiator and you'll get the picture. The revenge scene is overshadowed by what comes next: showered with praise after his victory in the Flavian, Vesuvio attends a Fellini-esque party in which Finch heaps on vividly surrealistic, X-rated description; no doubt the best-written sequence of the book.

Unusually for the typical historical novel, Golden Voyager features scenes of characters getting high. Drugs were in fact used in the ancient world, particularly marijuana - see Chris Bennett's Green Gold: The Tree Of Life. Vesuvio's fellow pirate slaves in the second half of the book chew cannabis before their plunderings, and our hero joins in. This is a nice touch, only Finch ruins it. You see, the cannabis turns the pirates into slavering beasts who only want to rape and pillage. It's all straight out of Reefer Madness. Anyone who's anyone knows that dope mellows the senses; despite the terror-mongering of the Christian Right, it does NOT turn you into a maniac. I'd assumed that sort of mentality had disappeared long before 1978, and it's even stranger when you consider Finch was in his 20s in the Psychedelic Sixties! So I assume he was one of those horn-rimmed glasses/buzzcut hair types, one of those guys you'll see in the Let It Be documentary, asking the cops to shut down the Beatles' impromptu rooftop performance.

The reader catches a glimpse of life in the Roman Empire, with mentions of the manifold gods and goddesses, even the di rigueur mention of "the Nazarene." But the tale is more focused on Vesuvio's adventures, resulting in something more akin to Conan or any other pulp fiction set in ancient times. What I'm saying is, this is just a straight-up revenge tale with action, intrigue, and sex to spare, which just happens to be set in the era of Trajan's rule. In many ways it's no different than the average Conan or King Kull novel, save for the fact that it's set in an actual, historical era, and also due to the copious and detailed sex scenes. But even these are reserved; Finch writes pages and pages of descriptive sex, but uses mostly medical-textbook terms for the bodyparts involved, and not a single profanity is uttered in the book (strange, when one realizes how absolutely profane Latin could be). So even though it attempts to be a "raw blockbuster of sensual adventure," as the cover blurb declares, the novel could easily have been published a few decades earlier and not have caused much of a stir.

Which brings us to the heart of the issue. A fun thing about pulp fiction is how much can be read into it - for example, see Norman Spinrad (under the guise "Homer Whipple") giving himself a Freudian reading in the superb The Iron Dream. You see, Finch goes on at great length about Vesuvio's good looks, his superhuman physique, and - especially - his "phallus." Get used to that word; you'll be seeing it a lot in Golden Voyager. Vesuvio's equipment is the focus of conversation for a panoply of characters, both men and women - the men envious, the women enraptured. Yet, as Finch constantly reminds us (or himself?), Vesuvio does not engage in "unnatural sex," ie relations with other men. Even though his fellow male slaves do so (and Finch of course gives us a few scenes graphically attesting to this), Vesuvio stays off to the side, mulling over man's seeming desire for self-punishment. It's all very funny and even an untrained reader could divine layers of subtext in the prose.

A third of the way into the book Finch tosses the subtext out the window. Sold as a "pleasure slave" to a Mesopotamian king, Vesuvio is taken by caravan to the palace. Along the way he is informed he will have to pleasure the king himself, and so must force himself to think of another man in "that way." With his new master demanding that he "practice" on a fellow male slave, guards posted outside ready to kill him if he disobeys, and Vesuvio forcing himself to realize that if he doesn't do it he will die (also telling himself that "Good men have practiced sodomy"), you just want to open that closet door for Finch and let him out. But the King dies, and Vesuvio never has to go through with it; though this scene gives us more priceless dialog concerning his "manhood." I want to say Vesuvio's endowment acts as a symbol of something, or that Finch is poking fun at the purple prose typical of the historical revenge epic. But I can't; the novel itself just doesn't justify it.

Golden Voyager was followed by Pagan Voyager in 1979 (published in the US under the title The Pagan), and the trilogy concluded with 1981's Voyager In Bondage. There are several editions of Golden Voyager. My copy is the US paperback, complete with a lurid, airbrushed cover of golden-haired Vesuvio surrounded by a bevy of nude women. The artist read the book, at least. The UK Pan Books edition sports a detail from Frank Frazetta's painting The Rogue Roman, which itself was the cover for Lance Horner's 1965 novel of the same title - a novel, by the way, with many similarities to Golden Voyager.

"Here Finch indulges his inner Robert E. Howard, with Vesuvio becoming entangled (so to speak) with the Red Sonja-esque Athana, a beautiful, Hispanic piratess/former gladiatrix who employs Vesuvio as her right-hand man and who discovers that he (of course) is the only man who can satiate her womanly needs."

Not Red Sonja (who isn't a Howard creation,) but Bêlit, the titular Queen of the Black Cooast, with some Valeria (from Red Nails) thrown in for good measure. The Howard Boom was in full swing when this book was published, so it's not surprising Finch tried to get a bit of that action in his book.

Tex
(wondering if they paid Fritz for the cover)

It's funny you excerpted that Red Sonja comment, as I just posted a review for an REH anthology that contains the "Red Sonya" story. A few years ago I re-read Queen of the Black Coast and couldn't get over how GOOD it was. It was by far my favorite of all the REH stories I re-read. "Hour of the Dragon" is another I hold in high esteem, but I haven't read it since I was 19.