Shards of God, by Ed Sanders -- A Burroughsian look at the Yippies 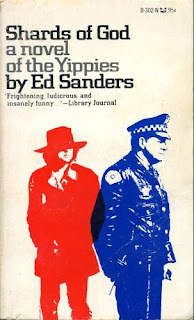 Shards of God, by Ed Sanders

Ed Sanders' Shards Of God is not an easy novel to review by any means. Totally of its time, it's redolent with views and sentiments which were probably outdated the day it was published; no wonder it's long, long out of print. In some ways the novel is the funhouse mirror reflection of Anita Hoffman's psuedo-autobiography Trashing (published by Rolling Stone's imprint Straight Arrow in 1970 under the psuedonym "Ann Fettamen"). Like that novel, Shards Of God features actual Yippies in main roles, particularly Abbie Hoffman, Jerry Rubin, and Paul Krassner. But whereas Trashing mostly stuck to real-life escapades, Shards Of God is a modern myth, a fantastical fable of drugged-out depravity.

Sanders relates the shenanigans of himself and his fellow hippies in a "living myth" fashion, with Egyptian gods even taking part. Sanders, Hoffman, Krassner et al are larger-than-life characters, more demigods than actual mortals, and each act is blossomed into some mytho-poetic fantasy of absurd degree. One need look no further than "Shards Of God" to see where modern-day analogues like Mark Leyner got 98% of their schtick.

The novel proceeds in episodic fashion; each chapter works as a self-contained short story. Real-life characters like Hoffman and Rubin interract with characters like Quick Kill Merle, Aunt No No, and She-Who-Sucks-in-a-Skirt-of-Snakes. We are treated to phantasmorphic recreations of real-life incidents such as the "Pentagon Exorcism," as well as inside looks into how one was "initiated" into the Yippies (a charnel-house sequence which most likely had William Burroughs either red with envy or red with outrage over such gross missappropriation of his writing style).

Sanders writes with a flair and verve which quickens the reader's pulse. Coupled with his obvious familiarity with ancient myth, this makes for a one-of-a-kind reading experience. The only question is, who today would want to read this? Sanders opens the novel with a preface which states that the Yippie revolution will be successful, changing the entire world. I don't need to tell you that this never happened. Like Trashing, I have a feeling Shards Of God was already behind the times upon its publication in 1970. That Sanders is so beligerent throughout that he is a harbinger of a future reality only heightens its charm and obscurity; I checked the book out from the library, and, according to its checkout slip, the last time someone else had done so was March, 1982.

Sanders did the first book on Manson, called The Family. Not bad, way better than the dry Bugliosi book. Pretty straight forward for Ed, though he slips a few far-out phrases in here and there. ooo-eee-ooo.