Voyager In Bondage: Final Volume of the "Voyager" Trilogy 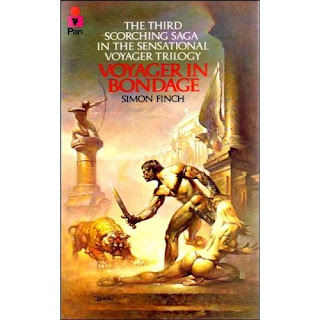 Voyager in Bondage, by Simon Finch

The final book of Simon Finch's Vesuvio trilogy, Voyager In Bondage was published in 1981. Whereas the second book, Pagan Voyager, had come out just one short year after 1978's Golden Voyager, it took Finch two years to write this final volume. Voyager In Bondage is also very short. Golden Voyager was over 400 pages, with Pagan Voyager coming in at almost 300. Bondage is just over 200 pages long. But still, you can't blame Finch for struggling to come up with material. I mean, early second century CE in pagan Europe, with its manifold religions and larger-than-life characters and scheming Roman aristocrats; what writer could come up with an interesting novel from such meager material?

Coincidentally, Voyager in Bondage, unlike the previous two novels, was not published in the US. Either Finch's agent couldn't secure a deal or no US publisher wanted it. Strange, because according to the UK publisher, Souvenir Press, the Voyager trilogy was "best-selling." Perhaps it's moreso that US readers didn't cotton to the near homoerotic content of Golden Voyager and Pagan Voyager, and preferred historical fiction which didn't feature every character discussing the size of the hero's "phallus."

Bondage takes place twelve years after the previous book in the trilogy, the dire Pagan Voyager (published in the US as The Pagan). Hadrian's now emperor of Rome, and Vesuvio has spent the past decade living in peace on his estate in Campania, raising his son (Aurelius, now 14 years old), and living in contentment with his wife Miranda. In fact, so content is Vesuvio that his son doesn't even realize the brutal travails Vesuvio endured before Aurelius was born; the kid actually looks up to one of Vesuvio's slaves - the wily Orphic Christian Lexor - as a man of adventure.

In the previous two novels Finch proved he was capable of plagiarizing from himself: Pagan Voyager was in many ways just a reworking of Golden Voyager. To whit: in Pagan Voyager Vesuvio was cast into slavery, flung from one new owner to the next, competed in a high-stakes chariot race in an arena, befriended a kindly old Jew who eventually helped him, and finally regained freedom thanks to the help of Roman aristocrats. All just like in Golden Voyager. Bondage continues this trend, ripping off Pagan Voyager. In that novel, Vesuvio's wife was abducted. Here it's his son who's abducted. In that novel, the villains were an evil man and woman who propagated a strange new god named Bendis. Here the villains are an evil man and woman who propagate a strange new god named Christ. In Pagan Voyager Vesuvio allowed himself to be passed around from one master to another, losing all sense of urgency in finding his kidnapped fiancé. Here Vesuvio, despite his son being kidnapped, finds time to visit the Games in Rome, plans to visit Trajan's Bath, and goes on impromptu sight-seeing tours. The parallels continue, and add further proof that Finch was running out of ideas.

Bondage follows the same twisted path as the preceding two books. It's infuriating in a way. Finch sets the groundwork: Vesuvio's happy life shattered by a unappreciative slave who steals Vesuvio's son and demands a massive ransom. Vesuvio and twenty year-old Antony, son of Vesuvio's head slave (and hence a slave himself), set off in pursuit. The reader expects a vengeance-driven romp through Hadrian-era Rome. The reader is disappointed. Because, just as in past novels, Finch chooses instead to indulge in go-nowhere digressions and pointless, page-consuming dialogs between immaterial characters. Not only that, but Vesuvio himself is relegated to a nonentity. I mean, if YOUR son was kidnapped, would YOU find time to visit the bordello of a prostitute friend and plan to relax in the Trajan Baths? That's what Vesuvio does. It would be fine if he was a deadbeat dad, but Finch wants us to believe that Vesuvio's going nuts with rage, trying to get young Aurelius back. It's laughable.

But here's the best part: during the course of this book, Vesuvio is again captured and thrown into the miserable life of a slave. Just like in the previous two novels. Granted, this happens toward the end of the book, but it happens all the same. Arriving in Alexandria at the climax of his lame "search" for Aurelius (which basically constitutes talking to remote-area Roman aristocracy and visiting bordellos), Vesuvio is thrown in prison for half-baked reasons and sent to the arena as a gladiator. You'd think the guy would get the idea and never again leave his estate in Campania.

The finale of Bondage (and the trilogy) sees Finch at last writing what the series has been leading to: outright s&m with a heavy gay subtext. Basically, the Gor novels set in ancient Rome: all leather armor and chain mail and edged weapons and strapping young lads. The penultimate section of this novel is even titled "Leather and Chain," for all those who don't get it. Vesuvio finds himself about to become a retiarri, fighting with net and trident against lions. But then Finch pulls the carpet out from under us once again, denying readers the scene he's spent so many pages setting up. It was at this point I realized something: not once in this entire trilogy did Vesuvio fight anyone. How strange for an epic of historical fiction! No sword fights, no mortal combat, not even a fisticuff or two...no, Vesuvio, over the course of this trilogy, instead spends his time rushing a la Don Quixote from one poorly-plotted and poorly-conceived situation to the next, flung about like a frisbee on a windy beach.

Bondage is the first of the Vesuvio novels to deal with Christianity in any depth. I assume Finch had read the recently-published Gnostic Gospels by Elaine Pagels, which was an international bestseller in 1980, around the time Finch was writing this book. Because the Christianity Vesuvio encounters is of the Gnostic bent, with Orphic rituals overlaid. Unfortunately Finch didn't do much research: characters actually refer to their Christianity as "Gnostic" (whereas the designation wasn't coined until the 1800s), and several Christians refer to their "scripture," which as any Robert Price/Earl Doherty reader would know is a misnomer; despite the best efforts of Josh McDowell et al, there is no evidence of extant Christian scripture until well into the second century. But this is a minor problem; luckily, Bondage features no scenes of characters experiencing "salvation" through Christ on the arena floor or other ilk expected of religious-themed historical fiction. Indeed, the Christians come off rather badly in this novel, so I give Finch credit for that.

A strange thing about Bondage is that Finch backs off on the homoerotic context so prevalent in the previous volumes. That's not to say it's entirely gone. This time young Antony gets most of the attention, with prostitutes and young boys trying to get some quality time with his "manhood," which, Antony is sure to remind them, isn't as big as his master Vesuvio's. I'm not making this up. Adding to the strangeness, in Bondage Finch seems to finally realize that ancient Romans cursed fluently, and so spices up the textbook blandness which had bogged down the sex scenes in the first two novels. This does not make these scenes any sexier, unfortunately. Instead it all comes off as Finch's last-ditch attempt to finally make his books steamy and shocking. Failure all around.

As far as the writing itself goes, Finch actually got worse with each volume of the trilogy; the first, Golden Voyager, was easily the best written. Bondage is riddled with bizarre grammar, lackluster scenes, flat characters, and outright mistakes: at one point, Antony tells some friends that he and Vesuvio saw a woman get stoned to death upon their arrival in Alexandria, whereas Antony and Vesuvio saw no such thing in the narrative itself; instead, they learned about the stoning through a conversation, a conversation that didn't even take place in Alexandria. Mistakes like this mar the entire book, little things Finch should have caught with even a cursory edit. In addition, Finch apparently discovered semicolons shortly before writing this novel. He uses them to break up just about every other sentence, even sentences that don't need them.

Finch seems to have published only one more novel: 1985's Slave Island. After this I'm not sure what happened to him. He has no Web presence; an online search yields only sellers with copies of his extant novels, which no one seems to have taken the time to review. It's sad in a way. A casualty of the information age, maybe? Because I imagine this Vesuvio trilogy, trashy and poorly-written as it sometimes is, had its fan in the day. In fact it certainly did, otherwise Souvenir Press wouldn't have reprinted the lot in 1985. So where is Finch today? My bet is he burned out in the novel-writing world. Or, as I opined in my Pagan Voyager review, he took on a pseudonym and delved into a whole `nother sort of male-centric fiction...

I read Golden Voyager when I was around eleven and it... Sort of made an impression. Now I'm gonna dig up the other two books and read them too. But have you reviewed Slave Island?