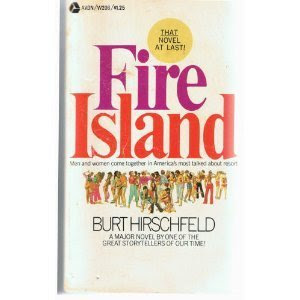 That novel, at last!

So proclaims the cover of one of the many mass market paperback incarnations of Burt Hirschfeld's now-forgotten 1970 blockbuster Fire Island. And that blurb isn't far off the mark; this is a true piece of Glorious Trash, a novel so designed to capitalize on the take-a-novel-to-the-beach market that it's actually about people going to the beach.

For a brief time last year I was obsessed with Burt Hirschfeld. I discovered him via the usual means; happening across one of his novels (Cindy On Fire, an indirect sequel to Fire Island) in the paperback section of a used bookstore. I bought the book because it promised all sorts of sordid fun: drugs, psychedelia, sex. (These are the things I demand in my trash fiction.) I looked up this author whom I'd never before heard of, only to discover that he'd published a plethora of novels over the years, all of them paperback originals, all of them steamy soap-operatic tales of beautiful people in beautiful places having beautiful sex. I also discovered that Fire Island was his first hit; before that he'd churned out a whole 'nother plethora of novels, these ones even trashier tales about jet-setting sex-maniacs which he published under the psuedonym Hugh Barron.

This is where the obsession kicked in, because the Barron titles were first released in the UK, under the wonderful New English Library banner. All were sex-and-drugs-filled tales with nude or mostly-nude women on the cover; I had to have them all!

One day I'll cover the Barron books, but today I'll start with Fire Island. It appears that after a somewhat-successful career churning out trash, Hirschfeld thought he'd strike out for the big leagues. Harold Robbins novels were all the rage, so Hirschfeld followed suit; take The Carpet-Baggers, set it in the late '60s, and place it in the New York island getaway of Fire Island, and you have this novel...er, Fire Island. Whereas the books he published under his Barron psuedonym traded on lurid plots or themes, this novel would be themeless; instead, it's a slice of life story of several friends who over the years vacation together in a beach-house on Fire Island. It spans the years, focusing on a large cast of intertwining characters, detailing their soap opera lives, their rises and falls, their trials and tribulations. And it is very, very good.

So what happened to Hirschfeld? Sorry to say, but I think he's dead. He published a steady flow of novels on through the '80s and early '90s; the last novel I can find published under his name is Daybreak, from 1992. Given his steady rate of output previous to this, I can't buy it that he ran out of ideas or retired from writing. The only answer is that he passed away. What's saddest about this is that no one seems to care; search online for Hirschfeld and, though you'll find plenty of sites which list his countless books for sale, you'll hardly find a review (or even a plot) for any of them, even Fire Island. And indeed, those reviews that you will find for his books are usually negative, because the reviewers just don't get Glorious Trash, man.

But you and I do. And I'm telling you, Burt Hirschfeld is in a class of trash fiction all his own. Find him. Read him.

What a blast from the past! That's some serious cover art. I remember quite a few copies of this back in my days of working in a used bookstore. The only way I knew about Fire Island was Woody Allen's joke about it in Annie Hall...

Will, thanks for your comments. I'm also very happy to meet someone else who's even heard of Hirschfeld. I bet you also saw a lot of copies of his 1976 novel "Aspen." That one seems to be the most ubiquitous Hirschfeld in used bookstores. I have it but haven't read it. I'm starting to think, however, that is "Hugh Barron" output might be better (ie: trashier) than the stuff he published under his own name.

I did some rooting around on the Internet, and found out that Burt Hirschfeld passed away in 2004. He sure was a versatile novelist, and one who made the national bestsell- er lists despite the fact that al- most all of his novels were paper- back originals. Hirschfeld follow- ed in the tradition of Harold Rob- bins and Sidney Sheldon. And he wrote the novel "Generation Of Vic- tors, based on his World War II experiences. We will never see his like again.

Thanks for the comment! Curious where you found that info. I've searched around for information on Hirschfeld over the years but have found precious little. At one point someone on ebay was selling a signed index card from him, written out to an autograph collector; I think it was from the '70s. Other than that, not much info on the man himself.

Hey, Joe! I have nothing new to add about Burt Hirschfeld. I arrived at your spot looking for more details. I kind of like it when there is no wiki page.

I have been staying on Fire Island for a few summers but this book never cropped up even though the house is stacked with old paperbacks from the sixties onwards. My wife's family have owned the house since 1935 and lots of guests left their summer reads.
I found this book in a yard sale in Yonkers, the lady who died was an ex child radio actress, I bought some memorabilia, scripts and the like, one she worked on with Orson Welles.

She was Betty Jane Tyler and was on Land Of The Lost and did record work on Rootie Kazootie. None of it meant much to me as I grew up in the UK. It was sad.
And I picked up this book. Fire Island. I picked it up because of the connection. And now... I'm trying to make connections out of randomness.

Anthony, thanks a lot for the comment, and I'm happy you found my blog. I do have a bit more Hirschfeld info, as a few months ago someone who was distantly related to him wrote to confirm that Burt had indeed passed away in 2004, but had stopped writing well before that, after suffering a stroke in '94. He also said that Hirschfeld wasn't a "jokey" kind of guy.

If you do read Fire Island, I hope you enjoy it. I read it about 6 years ago or so and still think of it fondly. I plan to read it again someday.

Also, really appreciated your comments on estate sales. Yes, there is a sad sort of feeling to going through the accumulated collections of someone who has recently passed away; my wife and I have gone to several estate sales over the years, and there's always a depressing vibe to them. I too, likely due to some morbid nature, have often tried to look up more info on the people whose homes I've visited, as if I've become the caretaker for their possessions. Sometimes things work out, as once I got a huge collection of jazz LPs from the '70s, the exact stuff I like and in most cases albums I'd been looking for, and they were all in perfect shape, other that is than the owner's name written on some of them -- and ironically enough, his name was "Joe."

Anyway, thanks again, and if you read the book, please let me know what you think of it!

I just finished this novel and have to agree that it's spot in the Trash Hall of Fame is well-deserved. Hirschfeld's writing -- in this novel at least -- made me think of him as a poor man's Irwin Shaw. In fact, Fire Island almost escapes being labeled trash. I stress almost. I have some copies of his other novels (Aspen; Key West) and look forward to reading those as well. Anyway, thanks for turning me on to the works of Burt Hirschfeld.

John, thanks a lot for the comment, and really glad to hear you enjoyed Fire Island. Aspen is one I also have and have been meaning to read...in fact I haven't read a Hirschfeld novel in a few years, so I need to rectify that.

Unless I'm very mistaken, two of Hirschfeld's novels, "Kelly's Heroes" and "Alex in Wonderland," were made into major Hollywood movies--the first with Clint Eastwood, the second with Donald Sutherland! Talk about a fall from grace!

I love this book also. I have also read several others by Hirschfeld and enjoyed them as well.......Cindy on fire......and Fire in the embers.......Keywest was also a good book he wrote. Hirshfeld was a large selling author back in the 70's.

Thanks a lot for the comment, RJ, glad you are enjoying the blog! I need to give Fire in the Embers another shot...I tried reading it back in 2010 or so but gave up. I wanted a novel about a writer, which is what I thought it would be, but instead it was about the protagonist getting burned out on writing and becoming addicted to gambling! I've never been fond of gambling stories. I think I made it up to the part where a major character (one first introduced in Fire Island) died in a car wreck, after which I jumped ship. I keep meaning to give it another chance. I also have Return to Fire Island but haven't read it yet. I really enjoy Hirschfeld's work, so I know I'll eventually read the whole Fire Island story someday. Thanks again!

And also thanks to Paul and htc for your comments -- meant to respond to them earlier but it looks like I plumb forgot. Paul, I believe those two books by Hirschfeld were just tie-in novelizations, not original novels -- I don't believe any of his novels were ever novelized. In the late '70s a tv mini-series was produced, crediting Hirschfeld's "Aspen" as the source material, but it turns out they just used his title and based the series on another Aspen-centered novel.

Okay, Joe, thanks for clarifying that!

I worked in a book store for a long time in the late 70s and early 80s, and Hirschfeld was very popular. In the early 80s, I attended a party in Westport CT and had a conversation with an older man. My friend told me later that was Hirschfeld! Even so, only recently got around to reading his books -- they're hard to find now. In the middle of Fire Island and enjoying it very much. It's like reading a Mad Men story but not ironically.

I totally agree with the author. Yes, it is trashy. I mean Fire Island. But it is captivating, very well written and, most of all, reminds me of me when I was young. Let me tell you, one of my favorite books in my youth years...

ALEX IN WONDERLAND and KELLY'S HEROES were screenplay novelizations, not novels adapted into films. Hirschfeld did a good number of novelizations, and for a brief while, his was a ubiquitous media tie-in byline.

His other movie novelizations were
BONNIE AND CLYDE (his most successful; stayed in print for years),
THE MERCENARY,
A MAN AND A WOMAN and
GAS!

He also wrote three original TV tie-ins (stories of his own, not adapted):
THE UGLIEST GIRL IN TOWN, based on the short-lived sitcom
GENERAL HOSPITAL
GENERAL HOSPITAL: EMERGENCY ENTRANCE