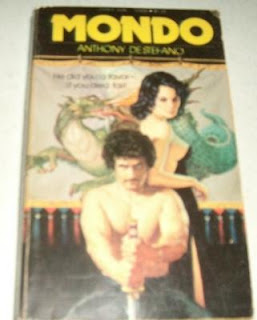 Thanks to Justin Marriott of The Paperback Fanatic for recommending this -- a perfect slice of the exploitative goodness Manor Books specialized in churning out in the '70s. Manor was known for being a bit more hardcore than most other men's adventure publishers; the series they published excelled in blood, gore, and sex, and most all of them were as lurid as the average grindhouse flick.

In fact, it's a surprise Mondo was never picked up by some production company and turned into a grindhouse flick. It's got everything 42nd Street connosseurs demanded: ultraviolence, crime, whores, torture, and sex.

Tapping into the kung-fu craze much as the earlier Manor series Mace had, Mondo combines martial arts carnage with Mack Bolan/Executioner-style gun-porn. The book comes off like the grindhouse classic Rolling Thunder meets Sonny Chiba's Streetfighter.

John Mondo is the lead character, and like most leads in a men's adventure novel he's a cipher: though we occasionally get into his head we never see what makes him tick, we never learn who he was before he became the blank slate of death who stars in this first installment of a three-volume series. We meet him here as an alcoholic bum, a burnt-out shadow of his former self. Once a happily married father, Mondo's son was killed in an accident caused by mobsters. Estranged from his wife, he's lived the past few years on the streets. And he's one mean motherfucker; the opening few pages detail a joyriding group of yuppies who come afoul of Mondo. He beats the shit out of the lot of them, women included.

Once a high-ranking thief, Mondo quit the life to raise his family, performing "one last job." This is the one which went wrong and left him a shell of his former self, his son dead, and his wife gone. For whatever reason the mob decides that, even though some time has passed, Mondo's still a liability, so now they're looking for him.

Mondo #1 is all about Mondo's return to who he once was and his vengeance upon those who ruined his life. Why he waited so long to do so goes unanswered. But once he's spurned back into action Mondo is as unstoppable as a force of nature. He plows through everyone: pimps, insurance-frauding nuns (in one memorable moment he face-punches a crooked nun), prostitutes, mobsters, even kung-fu masters. He employs his fists most of the time, however the martial arts scenes aren't as detailed as those in Mace. Like Sonny Chiba, Mondo fights loose and dirty; no fancy spinning back kicks for him. Instead, he goes for the fatal points. In one grueling sequence he kills a pimp by delivering a savage palm-strike to the man's balls.

Which makes it all the stranger that, midway through the book, Mondo hooks up with an elderly Japanese teacher so he can learn...martial arts. I say strange because previous to this we've already seen Mondo kick the shit out of innumerable people, so what exactly is there left for him to learn? But at any rate this sequence serves its likely purpose: filling up pages. Mondo learns to control his rage (to a point) and also learns more deadly tricks of the trade. And all of it of course is delivered in the usual lack of research one would expect from Manor: for example, Mondo calls the old man "sensi," which, we're told, is Japanese for "teacher." There are some other laughable gaffes as well, but this one was my favorite.

As the novel rushes toward its conclusion we realize that Anthony De Stefano might have more up his sleeve than just delivering another action-packed piece of Manor exploitation. For it gradually becomes clear to all the characters that, no matter how much vengeance he achieves, John Mondo will never find redemption or peace. He kills and kills in his single-minded determination to find justice for his dead son, but with each death he only becomes more grim. Even his friends soon turn away from him. And finally Mondo himself accepts what he becomes, realizes that no matter what he does, he has stared too long into the abyss. This in itself is enough to send Mondo #1 into more literary realms than the average men's adventure novel; The Death Merchant, safe to say, never once even considered the implications of his wanton "pig farmer"-killing.

But this is a lurid novel. Everything is rendered in brutal tones; the action scenes are gory as a splatter-movie, everything taken to an extreme level -- my favorite being when Mondo "divorces" someone's face into two halves with his pistol and De Stefano writes, "The left side was awarded custody of the nose." There's also a gruesome scene, lovingly detailed, in which Mondo discovers the raped and mutilated corpse of his estranged wife. I think I was more upset with this than Mondo himself was! Even the sex scenes are brutal and deeply unerotic. But despite all of the exploitative content everything occurs on a "realistic" level; there are no albino dwarfs or Nazi torture-maidens or any other bizarre villains one might usually find lurking in these sorts of novels. The villains are just cut-rate mobsters, not even memorable, save for a Chinese kung-fu master they employ as a last recourse against Mondo's swathe of destruction.

The novel builds to an ending which, again, takes it out of the ordinary standard of men's adventure novels. But it's the only ending possible for Mondo -- and one wonders how De Stefano was able to deliver two more installments in the series, given what exactly happens in the ending. I guess I'll just have to read these final two installments to find out.
Posted by Joe Kenney at 12:23 PM

Where has this book been all my life?!

Anything that combines two of my very favorite things - Rolling Thunder and Streetfighter - has got to be good.

Truly, this sounds amazing - and thanks to your post, I've managed to track this down. I cannot wait to devour it.

And I wonder, did the artist use Robert Viharo for that cover?

Karlos, thanks for the comment, glad you tracked down the book. It's one of my favorites and I need to get around to the other 2 volumes in the trilogy. I also think Mondo looks like a young Edward James Olmos (with an afro) on the cover...

I can certainly see Olmos there - which gives his Miami Vice spotlight episodes an interesting interpretation!

I'm now part way into MONDO 2 and - as you said - it's bleak, bleak stuff. No humor or levity at all. I approve.

It's funny you should say that -- I've been working my way through the complete Miami Vice series (first I've seen it since I was a kid), and it hit me in the Season 2 Olmos-spotlight episode "Bushido" that his character Castillo WAS a men's adventure novel-type character in the 1970s, working for the DEA in the jungles of Laos and whatnot...plus with the sword he uses in that episode, wasting KGB agents, it's like he basically became Mondo before our very eyes!

Miami Vice - for me, one of the best TV drama shows ever made. People laugh and point at me for my unashamed love for it. Here in the UK it was never really shown properly and is now seemingly banished to the "corny 80s" pile.

Another coincidence is, early on in MONDO 2, a character talks eloquently about killing with a straight razor.

In the recent Stallone film, The Expendables, Terry Crews (who physically resembles the Mondo Character), gives a similar speech.

Didn't I read somewhere that Stallone is a confessed pulp fan?

It's a small pulp world!

Karlos, you are correct -- Stallone is a pulp fan. In fact his forgotten 1996 movie "The Specialist" was "inspired" by the John Cutter series I've been reviewing here on the blog. It was this credit which actually "outed" Cutter as John Shirley.

And if the "Expendables" isn't an '80s men's adventure novel come to bigscreen life, I don't know what is!

This may be the book I read as a kid and been looking for since the 80's. Can you confirm one of the characters is called Belt. I think he trains Mondo or trains with him.