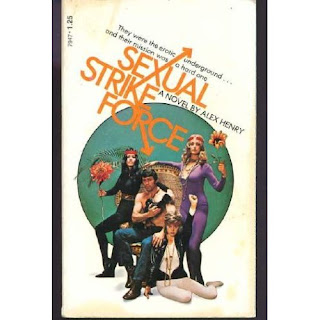 This Dell paperback original from late 1972 encapsulates the immediate Post-Woodstock vibe: it's as freaky and funky as an unwashed hippie coming down from an eight-mile high.

Our hero is Harry Trantus, an orphan of Greek heritage who is raised by a strict (yet depraved) Catholic priest named Father McCurdle to become an ultra Right-Wing nutjob. Harry's so gung-ho for the Establishment that upon graduating high school he repeatedly writes E. Ledger Mooney (ie J. Edgar Hoover) for a position with the NBS (ie the FBI). Harry soon becomes their top agent in his zealotry to crush all "Anti-American" sentiment, cracking down on rock groups, dopesmokers, hippies, and any other longhaired threat to the American Way. But like Mooney himself, Harry is most concerned about S-E-X and its wanton effect upon the country.

Mooney sends Harry on his biggest job yet -- infiltating a terrorist cell of subversives who dub themselves "The Sexual Strike Force." Eco-terrorists who in a desperate bid to save the Earth have begun filming "blue movies" starring the daughters of various high-ranking industrialists and inserting them into TV broadcasts. The daughters are willing accomplices, and the films usually detail them getting screwed in literal and metaphorical means -- ie, the daughter of a man whose company is ruining the ecosphere gets reamed by a guy in a lion mask. Unless the demands of the Sexual Strike Force are met, more films will be made. It's unknown how many members comprise the cell; all that's known is that it is under the command of a mysterious woman known only as "Earth Mother."

Harry will be the 13th agent sent undercover into the Strike Force; the previous 12 have all gone native and sent Mooney their resignations. Infiltrating via a past acquantance named Angela Rose, a fellow orphan with whom he had his first sexual experience many years ago -- a woman who is now a core member of the Sexual Strike Force -- Harry becomes a still photographer on the sets of the blue movies. From here he meets a host of other wild and whacky Sexual Strike Force members while trying to discover who Earth Mother is; along the way Harry finds out that he has more in common with the Strike Force than he ever would've guessed.

Sexual Strike Force comes off like a parody of the men's adventure novels so popular at the time, but rather than endless gun battles it's composed of endless sex scenes. Like a Joseph Rosenberger novel which goes on and on with fight after fight, Sexual Strike Force goes on and on with sex scene after sex scene. To me this rings as satire, but the narrative does glean upon its own depravity; Harry is informed that the Sexual Strike Force battles violence with sex, hate with love, death with life. That's their motto at least, but regardless the novel is hardcore porn. (Don't get me wrong; I'm not judging, I'm just describing.)

The book opens with a hardcore sex scene, only to immediately plunge into another...and then follow up with a third a few pages after that. The same template is followed throughout, but somehow Henry is able to get a bit of character development in there. The novel is also a satire of various personalities/establishments of the late '60s/early '70s, which obviously gives it a dated feel -- but for me only adds to its charm.

So who was Alex Henry? It's certainly a psuedonym; no other work appears to have been published under this name. What with the crazy monikers of the various organizations and characters (ie the Gay Guerrillas, Earth Mother, E. Ledger Mooney), I get a Robert Anton Wilson vibe, but this book doesn't show up in any of his bibliographies, and "Alex Henry" wasn't one of his usual psuedonyms. (However, "Simon Moon" was...but beyond that Sexual Strike Force just doesn't read like Anton Wilson's work.)

There are of course a wealth of lurid elements on display, in particular Father McCurdle's treatment of the young Angela Rose: He likes to have her strip down and watch as she masturbates herself with a crooked candle, and then when she's finished he covers her with a blanket and pisses on her exposed feet.

Yep, it's that kind of book.

Great review. It reminds me of reading some of Laurell K Hamilton's books like Kissed by Moonlight (or something like that). You think "great, a book with sex scenes in it!" Then 60 pages in you are wondering what the plot is as you read your 12th sex scene.

Thanks for the comment. I now suspect that this novel was written by Donald Moffitt (aka Paul Kenyon), the man behind the Baroness series. Baroness #4 itself features a very similar plot, only it's carried out a lot better than here.