The Penetrator #1: The Target Is H 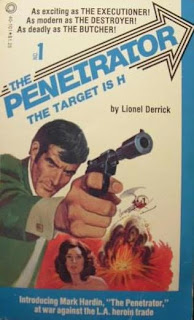 The Penetrator #1: The Target Is H, by Lionel Derrick
October, 1973 Pinnacle Books
Mark Hardin, the Penetrator -- change that "i" to an "o" and you'd have the perfect pornstar name. I mean, what were they thinking? Mark Hardin? The Penetrator??
Actually, Pinnacle Books must've known what they were thinking, as The Target Is H was the kick-off of a successful series which ran for 53 installments.
It appears that "Lionel Derrick" was a house name for authors Mark Roberts and Chet Cunningham, with Roberts writing the odd-numbered volumes and Cunningham the evens. This first volume then was penned by Roberts, and it's very much in the Don Pendleton "Executioner" mold: ie, Vietnam-trained hardass gets burned by the Mob, and now wages a one-man war on them. It's high on action and thrills and light on character and plot (not to mention sex...meaning it comes off more like an '80s men's adventure novel than one from the '70s).
Later volumes opened the series way up but this first installment, despite its narrow plotline, is actually very good. Hardin has a complicated backstory -- raised in foster homes, he achieved early greatness as an athletic champion. His sports career ended by a bad injury, he entered Vietnam where he again achieved greatness, nicknamed "The Penetrator" for his ability to "penetrate" enemy territory and take out large numbers of enemy soldiers. Here too Hardin's career was terminated early, this time beaten to a pulp by his fellow soldiers after his investagtion into illegal sale of US military weapons on the Vietnam black market.
The Target Is H sets all of this up within the first few pages, with Hardin a battered shell returning home from 'Nam, unsure what to do with his life. Therefore it's a bit jarring that the next chapter opens up 7 months later, with Hardin now living in a secluded desert fortress with a "mad scientist" named Willard Haskins and an American Indian named David Red Chief, plotting a three-man war on the Mafia.
Even the reasons for this war are glossed over -- Hardin fell in love with Professor Haskin's niece Donna, who spurred Hardin to research the reasons behind his old high school football injury. It turns out that the guy who hurt Hardin was a low-tier mobster; this revelation lead the two of them further on until they somehow ran afoul of Don Pietro Scarelli, local mob boss, who had Donna killed in a car crash. (Again, all of this is rendered in elliptical flashbacks strewn through the main narrative; Donna doesn't even appear in the narrative, which is unfortunate when you realize that her love for Mark and her murder are the two factors in his genesis as the series hero.)
Hardin relies on his 'Nam penetrating skills to wage an effective war on Scarelli's mobsters. There are a few Mafia factions in the city and Hardin hits each of them so that soon they think one faction is battling another. Hardin's got a host of weaponry, most of it culled by Haskins, some of it developed by the Professor himself, such as a dart which can render a man to a death-like state for a few moments.
The battles are mostly one-sided, with the goons no match for Hardin's skills. Regardless the action sequences are all well staged and expertly rendered, particularly a great scene where Hardin gets a small army of mobsters stuck in a canyon and lobs white phosphorous down upon them. This is probably the most brutal treatment I've ever seen delivered to the mob in a men's adventure novel! But other than that there are a lot of running battles, with Hardin blasting away thugs with various automatic weaponry.
Hardin isn't the superhero typical of these types of novels. He has past injuries which he's still trying to overcome, and despite the horrendous losses he inflicts upon his enemies there are still many times in which he himself is in mortal danger. There's another great sequence where, barely able to move due to his injuries, Hardin has to scale a cliff in pitch-black darkness, escaping an assembled army of mobsters and police.
Character development is minimal, which again is a shame -- a "regular" novel would've centered solely upon Hardin's recovery of his body and psyche, whereas this one cuts past all that stuff just to get to the gory action. (That's not a bad thing...I'm just saying.) But you get to like these characters, and you look forward to reading about more of their adventures in future installments.
Posted by Joe Kenney at 10:00 AM

I actually read Penetrator #4 over the weekend. I hope to write a review of it some time in the next day or two. I agree on the really unfortunate series and character name, though. Also, while it's a somewhat unusual premise for a series (in a good way), I didn't really find the writing or plot held up the promise. We shall see though; I've got some of the much later Penetrators and maybe by then the authors have settled into their roles a little better.

Jack, thanks for all of your comments. I started reading Penetrator #2 the other week, but have only read it off and on -- I take it with me when I go shopping with my wife. I tell you, there's nothing like sitting in Dillards with a copy of a book titled "Penetrator #2: Blood on the Strip!" This second one is a little better than the first...still kind of rough but more lurid, like the Sharpshooter or something. One of the great things about this series is that you can get lot deals for cheap. Over the past months I've bought two boxes filled with volumes of the Penetrator, for only a few dollars per box. So now like you, since I have so many of them, I'm gonna read them regardless.

You see that title and you can’t help but think it’s about a product called “Penetration H.”

This was the first time I had read The Penetrator. Maybe my mind works a little differently than yours but I didn't make the connection between the characters name and the series name until I read your review. Oh well.

There were things I liked about the book and there were things I didn't. I thought the similarities between Hardin and Bolan would be more pronounced but they ended up being superficial. While Hardin's vendetta against the Mob started very similar to Bolan's it quickly became a quest to bust up the herion trade in that area and the ties to the Mob became secondary. By the end of this book, Hardin had been cleared of all charges and offered a license to kill by the federal government. So it seems, from here on out, Hardin won't have to worry about law enforcement unlike Bolan. Hardin also doesn't spend a lot of time dwelling on the "righteousness" of his battle compared to all of the introspection Bolan does.

It would have been nice if the author had spent a little more time introducing Professor Haskins and David Red Eagle. He spent a little time telling us who they were and then they were a permanent part of team Hardin. It was quick but then again the book was pretty short and deep character backgrounds are a luxury seldom used in these types of novels.

As a side note, in your review you said Mark Roberts wrote the even numbered volumes and Chet Cunningham wrote the odd numbered volumes. For the Kindle version and the Audible.com audiobook version of these books, Chet Cunningham's name is the only name on the cover. At least in this volume, I didn't see a reference to "Lionel Derrick" or Mark Roberts. I'm not sure if that means anything or not.

And yes, there is an Audible audio version of The Penetrator series. It's not good though. The author doesn't do a very good job making the characters sound different, his accents are horrible and the production values are very low, in that you can actually hear the author turning the pages in his script. But, I had to at least give it a try since I thought it was so strange that someone actually spent money producing an audio version of this series.

Overall, I liked the book. I'll probably read more of these in the future.

Chris, thanks for the comments on the book. I'm now up to volume 27 and your comments have made me realize that all of the things you point out are still true -- Professor Haskins and Red Eagle are still mostly underdeveloped as characters. Haskins usually garners one or two sentences a book at most. Red Eagle sometimes has more of a part, but usually just minimal stuff like helping Mark Hardin heal after a mission or prepare for one. In later volumes he's also stated as being the Penetrator's expert on modern warfare technology.

You are very correct on this series being more graphic than the Executioner, particularly the first 20 or so volumes. After that something must've happened behind the scenes of The Penetrator, as the violence tapers off in a major way. However, in some of the early books, like 4, 12, and 17, it gets pretty brutal, and the Penetrator is more violent than his enemies, especially in the volumes written by Chet Cunningham.

I'd heard of those Audible audio versions but never planned to look into them; thanks also for sharing your thoughts on those. Interesting about Mark Roberts not being credited. Each author is credited on the flyleaf page of the original publications for the volumes they wrote...maybe Roberts is missing out on being credited for his work in these new editions because he passed away several years ago? Whatever the reason, that's a shame.