The Sharpshooter #1: The Killing Machine 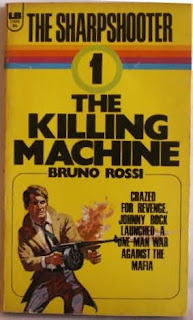 The Sharpshooter #1: The Killing Machine, by Bruno Rossi
August, 1973 Leisure Books
Here begins the 16-volume saga of Johnny Ricoletti, a young man recently out of "The Nam," where he was a noted marksman. Johnny is big into guns and hunting, and enjoys spending time in his country cabin, away from the city. Trouble looms -- the Mafia wants the company owned by Johnny's dad, and when the old man won't budge the mob guns him down. In fact the entire family is killed, and Johnny himself is injured in the attack, though he alone survives.
Recuperating, Johnny makes one of those comic-book decisions: he will wage his own personal war on the Mafia. Johnny Ricoletti is dead; he will now go by the name Johnny Rock. To complete the image makeover Johnny allows his hair to grow long ("modish") and also buys a whole line of Superfly-esque clothing (including, we're told, a "pantsuit with cape"! Oh, how I miss the funky '70s...).
Johnny puts those sharpshooting skills to work, wasting mobsters left and right. The Killing Machine is another of those '70s men's adventure novels in which the protagonist can do no wrong and indeed never even comes into any sort of personal danger -- so much so that eventually you begin to feel bad for the villains. The Mafia doesn't stand a chance as Johnny, using his anonymity to his advantage and striking hard and fast from the shadows, takes down top gunners, ruins long-planned mob events, and generally throws an incendiary grenade into the works. The way he gets his insider scoop is pretty funny -- he goes into a notoriously mobster-frequented restaurant and listens in on conversations!
The story opens up a bit with the entrance of Iris Toscano, one of those women who only exist in books like this -- a gorgeous brunette with a brick shithouse bod and with her own axe to grind against the Mafia; Iris was married to a top-tier mobster who was killed by the Family in a set-up. Iris has better connections within, surreptitiously gathering intel from her galpals, all of whom are mob wives and unwittingly deliver Iris info on where and when the local mob will strike.
Johnny and Iris become a formidable team, Iris using her wits to gather intel and Johnny using his various weapons (most of which he "brought back from 'Nam") to kill a whole bunch of goons. The action scenes are fequent and well staged. Even though you know Johnny will emerge unscathed, they still have a certain tension factor.
There's also a healthy sexual tension between these two; the reader knows (and the characters know) that they'll end up having sex; it's only a matter of when. Iris it turns out likes to keep Johnny "on edge" so he can use his vigour against the mob and not waste it in bed with her. However after one big, successful raid she rewards Johnny and this becomes the template for ensuing hits: like a dog getting a treat for performing a trick, Johnny gets to have sex with Iris every time he pulls off a successful raid.
Eventually Iris is the one who gets in trouble -- the Mafia would have to be total idiots not to realize where the intel-leak's coming from -- and Johnny must save her. The Killing Machine ends with Johnny and Iris deciding to take a vacation, then to return somewhere else in the States where they can continue their couple's crusade against the Mafia.
Only, that's not what happens.
One might expect Iris to be a central character in ensuing Sharpshooter novels, but she's only in one other book -- #9: Stiletto. The other Sharpshooter books feature Johnny working alone, with Iris unmentioned. Strange when you consider the import she has in Johnny's genesis as the Sharpshooter...yet not strange when you consider the many and varied hands which churned out this sordid series.
This first installment was, by all accounts, written by Peter McCurtin ("Bruno Rossi" being nothing more than a Leisure Books house name). And the writing's good, with some peaceful, idyllic moments strewn amid the carnage; in particular I enjoyed a sequence in which Johnny and Iris spent a brief vacation in his cabin.
My theory -- and it's completely ungrounded -- is this. Peter McCurtin probably wrote this novel as a standalone; hot off the success of his novel Mafioso (Belmont/Tower, 1970) he produced another tale about mob-busting. And I'm further theorizing that he titled his novel The Enforcer. For that's how Johnny is referred to throughout The Killing Machine -- not as "The Sharpshooter," but as "The Enforcer." McCurtin probably sold the novel to Leisure Books, and somewhere along the way they realized the storyline had the makings of a good series. So it became one, all under the house name "Bruno Rossi," and the standalone nature of McCurtin's novel was dropped so Johnny Rock could become more of a mob-killing caricature of Mack Bolan. And further, if this was to be a series then it would need a new name, as The Enforcer was already a series from Manor Books. Factor in Johnny's sniper skills, and there you have it: The Sharpshooter.
At least, that's what I think. All told, this is a fast-moving, action and sex-packed novel which, while good, isn't as deliciously lurid as some of the later installments in the series.
Posted by Joe Kenney at 11:53 AM

Following your reviews I decided to start reading handful of Sharpshooter novels I have in my collection and just finished #1. Really surprised to hear that Iris will not really feature much in the subsequent books, so I guess you're onto something with your theory. I was also intrigued about the use of the nickname "Executioner" throughout the book.

Holger, thanks for the comment. Check out Rayo Casablanca's essay on the series, too...he's like the Sharpshooter guru! But yeah, Iris' disappearance is unfortunate, as she's such a strong character in Killing Machine. But I guess it's a fair trade off, as the later volumes are much more lurid.

When it comes to Peter McCurtin "Mafia Buster" novels, I'm partial to THE KILLING MACHINE and his ASSASSIN Series. This author was at his best when he worked in the Western genre; his CARMODY series and the entries he wrote for the SUNDANCE series are truly enjoyable.