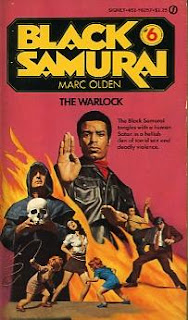 In my never-ending quest to find the most lurid men's adventure novel, I was thrilled to discover Marc Olden's The Warlock, the sixth installment of his 8-volume Black Samurai series. Just take a look at this cast of characters:

Synne -- Janicot's moll, a gorgeous black woman with silver hair, lips, and nails; with the body of a goddess she easily gets men to do anything she wants.

Rheinhardt -- A werewolf in all but name, with claws and fangs and a taste for human flesh. Janicot saved him from an asylum and raised him for those "special jobs."

A trio of transvestite dwarves who like to carve up their prey with razor blades.

An army of African "Lion-Men" who dress like they've just come out of a 1930s "jungle movie."

Chavez -- South American pimp who once ran a global sex-slave ring which the Black Samurai smashed a few books back; now he wants revenge for that, as well as his brother's murder.

All of this, and that's not even mentioning the hero of the series, a black American named Robert Sand who trained under the greatest samurai in recent history...and who now works for "The Baron," a former president who sends Sand on high-stakes missions as "The Black Samurai!"

This is exploitation gold, and it's no wonder dime-budget Al Adamson based his 1976 film "Black Samurai" on this very novel (which however got only one thing right -- casting Jim Kelly as Sand).

Marc Olden churned out this entire series within one year; a staggering feat by any means, but even more staggering when you realize that Olden's writing is heads and tails better than just about any other writing you will encounter in this genre. I mean, there's character development, there's good dialog, there's inventive setpieces.

There's even character intropsection...sometimes a bit too much so, as Olden has a habit of getting too much inside the heads of his characters. Paragraph and paragraph will go by, detailing a character's thoughts -- which isn't a bad thing, it just becomes problematic when the characters will later relate the exact same thoughts in their dialog. Hence it makes it all of that introspection come off like padding.

The plot -- The Baron tasks Sand with killing Janicot, who has succeeded in expunging "the last good man" from Washington via blackmail. Sand heads to Paris, where another politician, this one French, has just come under the Warlock's curse. Sand battles the Warlock's dwarves and Lion-Men, but it soon becomes more personal of a mission -- in a convoluted subplot, Janicot has also been hired to get rid of a meddlesome Vietnamese politician, one who is trying to clean up the corruption in his government...and one who happens to be married to Toki, the only woman Sand has ever loved. Oh, and Janicot's also been hired by Chavez to kill Sand. Janicot's a popular guy for sure, hired to accomplish three separate jobs, all of which just happen to involve our hero; this is a bit hard to buy.

The Warlock moves at a steady clip, with Sand engaging the enemy and surveying the scene. Sand is a powerful character, and thankfully not the superhero typical of the genre. He takes a lot of damage in this novel and has his own fears to deal with. He also has a healthy dose of Black Pride which he unleashes upon many; there's a funny scene where Sand yells at the Baron over the phone, with the narrative reminding us of the irony that here is a black man (unwittingly) telling the most powerful (white) man in the world to stick it. Olden himself was black, but the novel doesn't play like a piece of blaxploitation (you'd have to track down Joseph Nazel's Iceman series for that).

Again, this is a great read, and miles beyond the usual men's adventure novel. It appears that actual care went into the writing...other than the climax, that is. The Warlock builds and builds toward that final Sand/Janicot confrontation, but fails to deliver it. Indeed, the entire finale is middling, occurring in just a few choppy pages; even the Sand/Synne climax never comes. Several times throughout the book Sand nearly sways Synne away from Janicot (mostly just due to his Black Dudeness), but there's never any resolution. I'm assuming Olden planned to bring Janicot back someday, but the series just ended before he could. Though it also appears that finales were never Olden's strong suits; many of his novels just end, as if he's reached his page count and figured to hell with it.