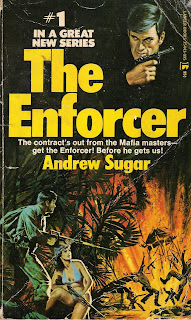 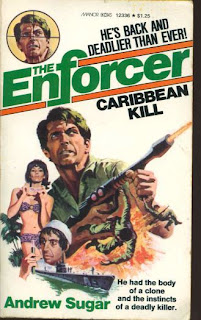 I used to hear rumors that Andrew Sugar was really a woman. No idea if there's any truth to that. Not long ago I picked up a copy of the Sugar novel YANK. Hope to read it soon.

That's a crazy rumor! I wonder if it's true? This is the first Andrew Sugar book I've read, but I've got the rest of the Enforcer series and look forward to reading it. I just assumed Sugar was a real person, as so many books were published under that name, from the Yank novel you mention to even a nonfiction book titled "Backpacking," or something like that. In other words, the name wasn't just limited to genre fiction...but who knows.

Andrew Sugar worked for several different publishers, so it certainly wasn't a house name. I believe someone once told me that her real name was Andrea Sugar (just one letter different from Andrew). I feel a little bad about gossiping about something that may not even be true, but that's the way a lot of this bibliographic info gets uncovered in the first place.

Well, actually just Lancer and then Manor, now that I've looked at the ABE listings. Except for that tent book in 1979, which seems to be the last Andrew Sugar book. The Enforcer and The Israeli Commandos appear to be his only series, with YANK being his only stand-alone. 11 or 12 books total, in a career lasting about six years. Funny, I thought there were more than that.

Now that I think of it, in Enforcer #1 there's a part where minor character Brunnie -- Alex Jason's love interest -- goes on and on about how hard it is to be a woman in a man's world. If it's true that Sugar was a woman, than this would be a definite in-joke.

At any rate that would be pretty ironic, wouldn't it -- that one of the best writers of men's adventure novels turns out to be a woman!

Actually, I knew Andrew Sugar back in the seventies when he was writing these books and living in the Hudson Valley. Andy was definitely no woman -- he was married with two teen kids and a definite masculine persona including a scruffy beard and a bawdy sense of humor.

He was interested in libertarian politics and occasionally attended meetings of the then nascent NY Libertarian Party where I met him. He was always hustling to make a living as a jack-of-all-trades freelance writer and I once collaborated with him as an illustrator on a project he did for Argosy Magazine, a special issue called the Monster Annual around 1975 or so. Andy wrote all the articles. You can see a thumbnail of my cover art of a bigfoot fighting a bear at:

I lost track of Andy shortly after that and just thought of him a little while ago and did a search on his name -- which is how I arrived here. I was really surprised to find no works of his after 1979 and I would love to know what became of him. Maybe he adopted a pen name and is now a renowned but reclusive mainstream American novelist. If he is still alive he would be getting on in years since he was probably around 40 in the mid '70s.

Ralph, thanks so much for your comment! Thanks too for the link to your cover art. It's great to hear from someone who actually knew this author back in the day. I too wonder what happened to Mr. Sugar...as well as so many of the other authors whose work I enjoy. Have you read his Enforcer novels? There are many Libertarian-esque political conversations therein.

I bought the original art work for the cover of Caribbean Kill about 20 years ago for $50 never knowing anything about it until today when a goggle image search brought me here! Thank you!

Scott, sorry for the delay, I just saw this post! That's very cool to hear you have the original painting for Caribbean Kill. Did you ever read the novel? It was my favorite of the entire series, and one of my favorite men's adventure novels in general, though to tell the truth I kind of prefer the painting for the original printing from Lancer Books, when it was just titled Enforcer #1.