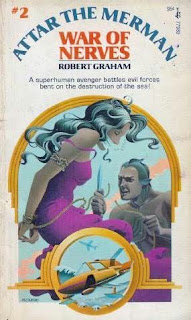 Attar #2: War of Nerves, by Robert Graham
March, 1975 Pocket Books
The strangest hero in men's adventure novels returns in the second and final installment of the Attar the Merman series. As mentioned in my review of Attar #1: Attar's Revenge, this was the work of noted sci-fi author Joe Haldeman, here posing as Robert Graham.
War of Nerves opens with a rather awkward recap of Attar's origin before getting to the plot at hand: a cache of experimental nerve gas, hidden at the bottom of the ocean by the US Gov't, has been discovered by a nutcase named Rasputin. Kidnapping an oceanographer named Mezler, Rasputin now demands a massive payoff before he detonates the nerve gas, which he has hidden somwhere off the coast of Cuba.
Once again hired by the CIA, Attar leaves his sea-city home outside of Australia and, along with his "brother" Victor and his pet killer whale Grampus, heads over to Key West, FL to help the CIA locate the nerve gas before it blows. Rasputin has given the US a week to meet his demands, and by the time Attar's onboard there are only a few days left.
The novel follows more of a low-key approach than standard for the genre. There are no massive shootouts, hardly any gore, and nothing outright lurid. There's not even any sex -- and despite the cover painting, there's not even a single female character in the novel. But regardless War of Nerves moves at a fast, absorbing pace. And I'll tell you why: the writing is great. This is one of the best-written men's adventure novels I've yet had the pleasure to read; in some ways it's nearly too good to be considered part of the genre. (But then Attar begins to breathe underwater and telepathically communicate with a killer whale, and it all makes sense again.)
My issue with Attar #1 was the lead character himself. There Attar was an arrogant ass, unlikeable and annoying. But here it's as if he's a reborn man. He's got a great sense of sarcasm throughout War of Nerves, and he and his psuedo-brother Victor trade witty banter throughout in a manner that would do screenwriter Shane Black proud.
All of the characters are wonderfully done, and again Haldeman does special justice to the aquatic characters. Attar's dolphin pal Sam is gone in this installment, replaced by a young killer whale named Grampus who was raised to think he is a dolphin. Through a convoluted process Attar's able to bring Grampus along to Key West, flying the massive beast on a C-130. The whale proves to be one of the most memorable characters, struggling against his "true" killer nature and the dolphin ways in which he was reared.
A tongue-in-cheek tone runs throughout the novel, elevating it beyond the genre norm. Here's just one example, as Attar and Victor, bloody and beaten after a brief skirmish with Rasputin, try to hitch a ride from Key West to Miami:
They decided they'd try to hitch-hike. Not surprisingly, though, nobody was anxious to pick up two burly young men - especially unshaven, in rumpled and dirty clothes, holding a probably stolen outboard motor and their eyes heavy lided with an obvious dope-fiend stare. The bloodstain down Victor's leg couldn't have helped.
The narrative proceeds in a cat and mouse game played between the villains and Attar. There are a few wonderful run-ins with the villains (in which we discover Rasputin might not be the main villain behind it all), and Attar is placed in grave danger throughout. There are also a lot of entertaining sequences with a one-legged assassin who's trying to kill Attar, Victor, and their CIA contacts. The novel builds to a spectacular climax as the villain holes himself up in a desolate fortress in Haiti, surrounded by a loyal, black-uniformed cadre of voodoo-practicing soldiers. (Okay, so maybe the novel is a bit lurid, after all.)
After Attar #1, I put off reading this second installment for a while. Now I'm sorry I did, because it's proven to be a highlight of the genre. Makes me sorry the series ended so soon. I wonder again if this early cancellation was due to low sales, or if Haldeman moved on to mainstream success and no longer felt the need to "sully" himself in genre fiction. (That War of Nerves is written so much more casually than Attar's Revenge makes me think this is a possibility, for this second volume is just worlds better than the first.) But if that was the case, wouldn't Pocket Books just hire some other chump to become "Robert Graham?"
I think again the issue lies with the lead character. Attar here is a good and resourceful character, but his ocean-centric background limits the type of adventures he can get into. In a way it's like that old Aquaman joke: he's pretty much useless unless he's near some water. But at any rate, this two-volume series is entertaining, with this installment in particular being pretty great.
Posted by Joe Kenney at 9:44 AM