The Baroness #1: The Ecstasy Connection 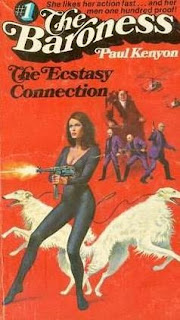 ..and then the world exploded.

Tex
(with a BIG bang)

Maybe it’s like Playgirl magazine—ostensibly for women, but really bought by gay men. Then again, there already were gay pulps, so Pocket Books would have some competition if they were trying to tap into that market.