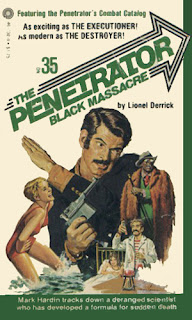 After a glance at the back cover of this installment of The Penetrator I expected something wildly un-PC, given that the villain of the piece is attempting to wipe out the black population with an accelerated version of sickle cell anemia. But in fact Mark Roberts, serving again as “Lionel Derrick,” doesn’t go as uncomfortably over the top as you might expect – save that is for the beginning, which sees the villain of the piece, a biochemist named Raymod Barr(!), being mugged by a trio of black youths.

Before that though we get some of Roberts’s patented in-jokery. He seems at pains this time around to remind us of previous volumes. First there’s a Denver-based reporter named Terry Lucas who helped Mark “Penetrator” Hardin back in the 23rd volume, now looking into his latest story – a nationwide fan club of Penetrator followers who are compared to “Trekees” and refer to their movement as “Penetratoring.” Then we cut to Mark himself, on vacation in Gulfport, Mississippi with more returning characters: Angie Dillon and her two twins, who are celebrating their 11th birthday. Angie first appeared in #29: Aryan Onslaught, had a connection with Mark, and we learn Mark has seen her a few times since.

I almost get the suspicion that Roberts was bickering with series co-writer Chet Cunningham, who long ago introduced a recurring female character intended to be Mark’s main squeeze: Joanna Tabler. Roberts rarely mentioned Joanna in his volumes, and as stated he introduced Angie Dillon, presenting her as “the” woman for Mark Hardin.  Cunningham seemed to respond to this by introducing another “Angie” to the fold: Angie Perez, who was also presented as Mark’s star-crossed soul-mate in #32: Showbiz Wipeout. So now we have three separate women, two of them named “Angie,” who each tempt Mark to give up the Penetrator game and live a normal life. Angie Dillon even reveals that she and her kids have joined a Penetratoring club in their home town, as they’ve figured out who Mark really is. What’s more, Angie asks Mark if they can just live with him wherever his secret headquarters is!

Not to provide spoilers but the other year I peeked through the final volume of the series, #53: City Of The Dead, and I seem to recall Mark was indeed with a woman and some kids in that one. I think it’s commonly known what happens to Mark Hardin in the final volume of The Penetrator, and I’m assuming he does end up with Angie Dillon, after all – perhaps most likely because Mark Roberts wrote the final volume! But I have a couple years to go before I finish the series and find out for sure. At any rate this plot just dangles after the opening section – Mark debating with himself whether he wants Angie and her kids to come live in the Stronghold with him – before it is unceremoniously dropped.

At this point Roberts introduces Dr. Raymond Barr, and our author follows the same template he has for the past several volumes: Mark Hardin disappears for long stretches of narrative and the villains take center stage. There’s a lot of dialog, a lot of page-filling. Barr and his wife are mugged and Barr’s beaten, wakes to find his wife is missing, and later learns she’s been raped and killed. While the black cop working the case finds the scumballs, the liberal courts quickly get them all off with no punishment, and Barr is left with seething but impotent anger. Then he’s summoned by millionaire industrialist Joseph Armbrewster, who reveals his own sad story – his daughter was killed by black hoodlums years before, and he’s been biding his time on gaining vengeance.

Arbrewster’s goal is to eradicate the black criminals who are protected by the liberal courts; he suspects that Barr, with his biochemistry knowledge and his own grudge against blacks, will be able to help. As it turns out, Barr will prove even more bloodthirsty than Armbrewster, looking to eradicate the black population entirely. But he agrees and is whisked off to Puerto Rico, where he’s to whip up a new variation of sickle cell anemia in one of Armbrewster’s high-tech facilities. Here Barr meets up with a local hippie group, led by a freak “with Charles Manson eyes” named Brad Lessor. Dubbed “the Scum of the Earth,” these hippies have been here for years and, conveniently enough, are waiting for the “inevitable race war” which the blacks will win – thanks to help from the US government – after which Brad Lessor will return to America as the white messiah who will rule the victorious-but-incompetent blacks.

There’s grim stuff here but Roberts keeps it off page. Barr first tests his biowarfare on a trio of black Puerto Ricans, and we learn the youngest of them is 13. But they’re dope dealers so it’s okay. Later he starts spraying the poison on business conferences and in other parts of the US, and we learn that adults, children, and even babies are dying. It’s all almost as outrageous as an installment of The Spider, with the caveat that Roberts doesn’t dwell on the mass deaths, as Norvell Page would have. The most we learn of it is that Mark Hardin has read something in the paper, or he mentions the “recent black deaths” in conversation.

As for the Penetrator, he’s busy researching nefarious business in…the shrimping industry! That’s right, folks! This whole element was so goofy and underexplained that I had a hard time understanding why Roberts didn’t just bring Mark into the fold after Barr’s sickle cell started killing people. But, coincidence be damned, it turns out that Joseph Armbrewster is also behind the shrimiping industry shenanigans, so while Mark is investigating the one case he stumbles onto the other. And he really is investigating; at this point “The Penetrator” is more of a private eye, with hardly any of the savagery and sadism of the earliest volumes.

To wit, he hardly kills anyone this time out. He beats up a couple thugs halfway through the book and tranqs one with dart gun Ava. He also carries an “Autoburgler” 12-gauge pistol, which curiously doesn’t appear in the Penetrator Combat Catalog (which makes a return appearance this volume). His first kill in the book is crushing some dude into a “pink smear” with a crane. Action picks up when Mark ventures to Puerto Rico. There’s some goofy humor here as the hippie thugs try to kill the Penetrator, not realizing how outclassed they are, springing lame ambushes on him that Mark easily evades. One of the hippie thugs once worked for Preacher Mann, from #24: Cryogenic Nightmare, but nothing much is made of this, other than being a reference to a previous installment – though interestingly one written by Cunningham.

There seems to be a heavy focus on car chases this time around; I believe Mark gets in three of them in the course of Black Massacre, two of them happening nearly back to back. The action highlight is when Mark and a new comrade stage an assault on Brad Lessor’s commune. Here Mark again uses WP rounds that burn into the flesh of his opponents; there’s a grim bit where one of the hippies screams as the WP burns through his lungs, and Mark blows him away after getting the desired intel. But another reminder of our changed protagonist – Mark tells himself it was the humane thing to do, putting the man out of his misery.

Either Roberts got lazy or was going for in-jokery because Mark crushes yet another dude in the finale – and the aftermath of this crushing is referred to as a “red smear,” I guess to go along with the pink one from before. Unfortunately though there’s no comeuppance for Dr. Barr, even though I felt he was more of a villain than Armbrewster; Barr wants to kill all blacks while Armbrewster “just” wants to kill off those he deems criminals. But Barr snaps and is put in an asylum, and thus Armbrewster and Lessor must share the brunt of the Penetrator’s wrath. The only problem is neither villain is very interesting; Brad Lessor as a late ‘70s Charles Manson has potential, but Roberts doesn’t exploit the character enough.

At novel’s end Mark goes back to the stronghold and ritually purges himself of the latest ordeal via a steambath or something. After which he’s already thinking about his next assignment, as it appears Professor Haskins has something big coming up. Overall Black Massacre wasn’t bad, not up to the earliest volumes but not as boring as some of the later ones.
Posted by Joe Kenney at 6:30 AM