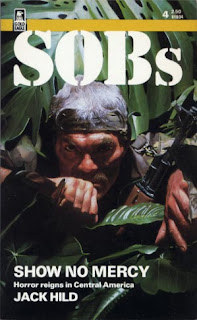 I almost forgot about the SOBs series; it’s been three years since I read the previous volume, but this one’s courtesy a new author so there’s no continuity to worry about. Per the copyright page a Robin Hardy wrote Show No Mercy, and the only author named “Robin Hardy” I can find is a lady named Robin Moore Hardy, who was born in Fort Worth in 1955 and began publishing novels in 1984. This would put the start of her writing career right around the timeframe that SOBs was being published, so it’s my assumption that she is indeed the Robin Hardy who wrote several volumes of the series.

If this is the case, then there are no giveaways that this version of “Jack Hild” is a lady; true there’s no sex or exploitation of the (few) female characters, but that’s par for the course in 1980s men’s adventure novels. The violence is fairly minimal, though; indeed the novel has more the vibe of a mainstream thriller than your typical men’s adventure joint, slowly building to the action finale over the course of 220+ pages. Unfortunately the main villain of the novel – a seven-foot giant named Jeremiah who runs a compound of brainwashed followers in El Salvador – is kept off-page too long, and his crazy jungle domain isn’t exploited to its full extent.

We meet Barrabas as he’s flying back to the US from Germany, having broken off a romantic interlude with his girlfriend, recurring character Erika Dykstra. She won’t appear this volume. Heavyset handler Walker Jessup has summoned Barrabas to New York, where he delivers the latest mission courtesy the senator who has given Barrabas’s soldiers all their previous missions: head into El Salvador and wipe out Jeremiah and his army of soldiers before they bring chaos to already-chaotic Central America. Oh, and while they’re down there they can also kill the female leader of the leftist guerrillas.

There’s a fair bit of US foreign policy bashing in Show No Mercy, more than you’d expect from an ‘80s Gold Eagle publication. But then the earlier volumes also had a sort of left-wing vibe, if for no other reason than the occasional mention of rock songs or the fact that some of the SOBs had counterculture backgrounds. But we are constantly reminded that the US government goofed, backing the sadistic Contras rather than the left-wing Sandanistas, and Barrabas is incensed that he’s now expected to clean up the government’s mess.

Too much time is placed on putting the team together. They’re the usual suspects returning from previous volumes, with a new guy named Geoff Bishop who’s a pilot. We also get the occasional reminder that Lee Hatton, the Smurfette of the SOBs, is smokin’ hot, but otherwise she’s as bland and forgettable as the other soldiers – save as ever for Billy Two, who comes off as a bit cynical this time around. I still feel there are too many characters on display and it’s tough to remember at times who is who, especially when it’s been three years since I read one of these books.

So we’ve got this plot of a religious nutjob and his army of brainwashed soldiers looking to raise hell down in Central America, and Barrabas and team are finally together and ready to go down there and bust those fuckers up. But what does Hardy do? Comes up with a pages-filling sequence in which some of Barrabas’s soldiers pose as employees at the Panama Canal, checking out the storage on the ship that’s carrying stolen weapons down to Jeremiah. These weapons have been taken by a wily, coke-snorting American terrorist named Beam, who regularly steals weapons for the religious figure and takes them down to El Salvador in this ship.

This does eventually lead to a firefight in which Hardy pays hommage to a recurring series schtick – one of the SOBs gets wasted. In this case it’s (SPOILER ALERT) Lopez, who I couldn’t remember from previous volumes but we do get a reminder that Lee Hatton sewed up his arm back in the lackluster first volume. His death is sort of built up, with best bud Nanos crying, and then Barrabas wondering how Lee will react to the news, but Hardy must forget about all this because it’s not really brought up again. And meanwhile Beam gets away, worming his way down to Jeremiah’s armed camp.

The leader of the guerrillas turns out to be a smokin’ hot babe named Rosaria; Barrabas of course doesn’t kill her despite his orders, given that he’s sort of aligned with her cause, anyway. It’s the ‘80s and all so absolutely nothing is made of her smokin’ hotness; if this book had been published 10-20 years before, Barrabas would be hooking up with her in a jungle hut posthaste. But in the ‘80s it’s all about guns and stuff, other than the occasional reminder how pretty Rosaria us.

It's unfortunate that we don’t get to Jeremiah’s “New Society” compound until late in the novel. It’s all very Apocalypse Now as the hulking Jeremiah surrounds himself with brainwashed vassals who are prepared to start various wars across Central America. An increasingly nervous Beam is treated to a tour of the camp, which rests beside a volcano and has an underground well system – Jeremiah shows off the drugs he filters into the water to keep his followers nice and brainwashed. All this reminded me of Tilt! in that Jeremiah got his start in San Francisco in the late ‘60s, preaching to the psychedelic masses; the implication is that these gun-toting mind controlled soldiers were originally acid-fried hippies.

There are like 500 of these soldiers, and believe it or not the SOBs wipe them all out in like a page and a half, conveniently hammering the convoy as it leaves Jeremiah’s camp. After this the nutjob only has a few of his elite guards with him, making the SOBs assault on the camp relatively easy – and anticlimactic. As I say, there’s all kinds of potential here, but Hardy avoids it, save for a hand-to-hand fight to the death between Barrabas and Jeremiah. There’s more heroic sacrifice here, but not courtesy any more of the SOBs.

All told, Show No Mercy is fairly fast-moving for such a long novel (at least for this genre), and Hardy’s penchant for single-line sentences adds to the quick-moving vibe. But the lack of proper exploitation of the subject kind of ruined it for me, and I’m still not finding myself very interested in Barrabas, his SOBs, or the series itself.
Posted by Joe Kenney at 6:30 AM