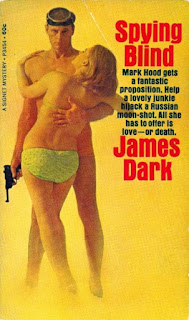 It’s seeming more to me that, of all the post-Bond spy series of the ‘60s, Mark Hood comes the closest to capturing the vibe of Fleming. This ninth volume confirms that, given that it comes off like a variation of On Her Majesty’s Secret Service with a little of the sci-fi element of the Bond films of the day.

This is not to say that J.E. “James Dark” MacDonnell goes for a Fleming vibe in the actual prose; he describes things a bit more than in previous volumes, which were almost outline-esque, but he doesn’t go to the elaborate lengths of the so-called “Fleming sweep.” But importantly, he keeps things moving and he keeps things interesting. However, at 122 pages (of very small print), Spying Blind is clearly more of a pulp yarn than any of the official Bond novels, and also was clearly turned out in a fast manner; unlike Fleming, MacDonnell likely didn’t have the luxury of spending a month or two in Jamaica writing his first draft and then tinkering with it for the rest of the year back home.

We meet Mark Hood as he’s in Monaco, one week after the previous volume: “Mark Hod had just completed the dangerous assignment of destroying Professor Klepner’s city beneath the sea.” Boss Fortescue at Intertrust ordered Hood on an immediate vacation, and interestingly Hood spends the remainder of the novel off-duty, here in Monaco to take part in a race. This volume’s bit of international intrigue literally falls into his lap: Hood decides to go for a late-night scuba swim by his hotel, where he’s attacked by a random frogman. It’s a fight to the death and Hood manages to kill the guy with his own spear gun; this will be Hood’s only kill until the very end of the novel.

Hood makes it back to the beach and collapses. Then a hotstuff brunette in a bikini appears, addresses him as someone else, and drops a package in his lap, telling him to deliver it to “Carton” on “the yacht.” She walks away, leaving Hood further confused. The dock teems with yachts, he doesn’t know any Carton, and the scuba attacker he just killed has conveniently disappeared, apparently taken away by the currents or somesuch. Here the sci-fi element comes in because the package contains a small, H-shaped bakelite key, and Hood discovers after some trial and error that the mysterious thing has the power to shut off electrical pulses in close range.

We readers learn that this is the control key for a Russian moon probe which is soon to return to Earth. The probe has also discovered a brand-new metallic element on the moon’s surface, which will also factor into the sci-fi. “Carton” is the treacherhous right-hand man of industrial entreprenneur Norman Edgell, who has schemed elaborately to get the key, so he can redirect the returning probe, essentially commandeering it. He wants to steal its “electronic brain” (man we should’ve kept this term instead of the more-generic “computer”), and use the Soviet technology therein to get the US on the moon first. Edgell doesn’t realize that Carton is plotting against him, looking to steal the tech for himself – and he’s also plotting to get busy with Edgell’s hotstuff daughter Lynne, even going to the extent of getting her hooked on heroin.

There’s very little in the way of action in Spying Blind. This is mostly because throughout Hood is trying to maintain his “jetsetting gadabout” image, thus doesn’t want anyone to discover he’s a badass super-spy with suprahuman karate skills. So when a blond-haired, easy-going dude with cold eyes shows up at Hood’s breakfast table next morning, Hood knows it’s a thug already come around to collect the package. This is Danny, a knife-tossing expert who initially threatens to steal the novel but is soon shuffled out of the narrative. There’s a nice bit of cat and mouse as Danny tries to casually threaten Hood, asking for the package for a variety of b.s. reasons. In reality he’s been sent by Carton.

It’s kind of dumb, though: Danny doesn’t speak French, so Hood lies that he gave the package to the cops for safekeeping, and will now call them to bring it back to him. So Hood, speaking French, calls the cops and simply tells them there’s an armed intruder in his hotel room, all while an oblivious Danny just stands there! Danny manages to escape, later doing a job on Hood’s racecar, so that he almost crashes during the race in a thrilling sequence that rivals anything in the Don Miles capers. Hood gets revenge by beating Danny to a pulp with his karate moves; it’s a violent scene but another instance in which Hood refrains from killing anyone in Spying Blind.

Edgell claims his scuba diver’s “gone missing” (Hood having killed him never comes up again in the narrative), so offers Hood the job after explaining what his motives are. So Hood goes along, handing over the control device. This whole bit is hard to buy because part of the reason Hood goes along is so he can cure Lynne of her heroin addiction; we’ll recall Hood is a trained doctor as well, thus he instantly knows Lynn is a “hophead” (per the back cover copy). Brace yourself for this one, friends – while Hood’s attracted to Lynn, he never has sex with her, and indeed doesn’t have sex at all in Spying Blind. The opportunity is of course there, with a week-long voyage to sea on Edgell’s massive yacht and Lynne all alone in her big room, but Hood’s more concerned with curing her – and MacDonnell keeps her off-page as much as possible.

Hood’s also gone along because he wants to see the returning moon probe and its electronic brain. Edgell’s never-seen “specialists” onboard have redirected the probe and it crashes in the sea, Hood and two other scuba-suited men going out to retrieve it and store it in the hidden compartment beneath the ship. There’s some nice tension when a Soviet destroyer immediately comes upon them, having tracked the “meteor” in the night sky, and send armed soldiers over to search the boat. Meanwhile Carton’s discovered via their Soviet mole that the moon probe has returned with a completely new element, taken from the moon’s surface.

The finale is ludicrous. Carton simply drugs Hood, Edgell, and Lynn at dinner, so he can make off with the new element. Then he sends Danny back to kill them all in the most belabored means possible; the new element burns under conditions I’ve now forgotten, so the entire idea is that Danny will pilot the yacht out into the Monaco harbor, having tied up the still-unconscious Hood and others, and then make the yacht burn with the new alien element. Instead Hood of course frees himself and tosses Danny into the propeller blades below – Hood’s second and final kill in the novel.

Even more ludicrous, Carton’s fate is rendered off-page; back in Geneva at Intertrust HQ, Hood is casually informed by boss Fortescue that Tremayne, Hood’s occasional partner (last seen in Throne Of Satan), has rounded up some fellow named Carton who has been attempting to sell some weird stuff on the black market. And Fortescue has no idea that Hood has been up to his neck with the very same group of people. It’s all kind of deflating, and certainly more of a hamfisted and flat-footed ending than Fleming would’ve ever delivered.

But despite it all Spying Blind is entertaining given that MacDonnell invests himself in the tale and keeps it all moving at an assured pace, doling out the economical prose of a pulp veteran. It’s lacking on the sex and violence angle but it still delivers that ‘60s spy-fy vibe I enjoy so much, and while it doesn’t achieve the crazy heights of Operation Octopus, it’s still a helluva lot better than earlier misfires like Assignment Tokyo.
Posted by Joe Kenney at 6:30 AM

I'd agree with your assessment as to the time schedule the author had. At the same time he was working on the 'Mark Hood' novels, he was also writing for Horwitz (Signet's Australian Partner.) reams of Naval fiction, some of which is pretty pulpy and a 'Dr Kildare' rip-off about which I know little other than it existed.