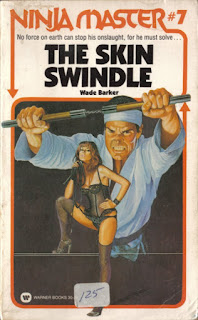 I didn’t expect to take three years to get back to the Ninja Master series – I also didn’t expect to only do one post this week, but the stomach flu wiped me out last week. Anyway this penultimate volume is courtesy the same mystery author who gave us #3: Borderland Of Hell and #5: Black Magician, delivering for the most part more of a martial arts thriller than a ninja yarn, one that goes very heavy on the sleaze.

Now folks there’s good sleaze and bad sleaze, and sorry to say, but The Skin Swindle is bad sleaze. The type of sleaze you just don’t want to read about. That cover of the whip-wielding babe and the back cover copy had me expecting a lurid entry in which Brett “Ninja Master” Wallace waded into the world of mafia-backed porn or whatnot, but man…well, the author instead focuses on the “kiddie” portion of that illicit market, making for a not very fun read. Not very fun at all! There are some subjects I think shouldn’t be broached, and this would be one of them…it’s for the same reason I’ve still not read the fifth volume of Ryker, The Child Killer.

But then, Ninja Master is known for pushing boundries. The previous volume, courtesy main series writer Ric Meyers, already featured little kids getting murdered by sadistic serial killers. So I guess at this point putting them in porn movies is just the next logical step. It’s just not the sort of thing I look forward to reading, and it’s the sort of thing that makes me wonder about the author – though I suspect this might be one of those times where the author has his tongue in cheek. I mean The Skin Swindle opens with an outrageous take on the “casting couch” cliché, only in this case it’s a seven year-old girl who’s servicing the sleazebag producer, all while her mother happily watches on.

Luckily the author doesn’t go full-bore with the details on the various acts involving children in the book, but we do get a damn lot about it…of course, leavened with the occasional condemnation of such despicable acts! It’s stuff like this that always makes me suspect (or at least hope) that an author’s being ironic, particularly given that the opening casting couch bit directly leads to a fairly explicit sequence of Brett going down on his casual girlfriend Rhea, she of the “eternally erect nipples.” Still though, The Skin Swindle makes for a very unsettling read, “irony” or not, and thus it was by far my least favorite volume of the series…even the slow-as-molasses first volume was better.

Well anyway, the mystery author enjoys referring to his previous volumes, giving the series a bit of continuity; Brett’s sidekick Jeff Archer, who proves to be irritatingly useless this time around, boasts about their having trounced the bad guys in Borderland Of Hell. The author also stays true to his version of Brett Wallace, delivering a more relatable character than Meyers’ version; this Brett enjoys the occasional drink, spends most of his time in various restaurants, and likes to blast “Steely Dan’s new album Gaucho” in his fancy sportscar. The Steely Dan appreciation was also noted in previous volumes, I believe. And more importantly so far as the series goes, this Brett Wallace is more of a martial arts superman than a ninja, content to kill people with everyday household objects instead of the exotic weaponry of Meyers.

Brett’s read about the sadistic porn industry in a series of articles published in the LA Times, and when he gets to the mentions of the kiddie flicks his fury is activated. He tells Rhea he’s going to get into it – she stays off-page for the rest of the novel – and rounds up young Jeff Archer to come along. Why Brett takes Jeff is a mystery because in this author’s hands Jeff is a complete loser. He runs Brett’s martial arts studio but proves incapable of fighting anyone in the course of The Skin Swindle, constantly getting knocked out or abducted. The expectation that he’ll provide the customary “comedic sidekick” role is also dashed, as Brett and Jeff are seldom together on-page.

It all just goes on and on with only occasional action. Brett’s learned via Sam that there’s a “King” of the industry, a guy behind all the snuff flicks and kiddie flicks and whatnot, and soon enough random thugs are coming out of the woodwork to waste Brett for poking his nose where it doesn’t belong. But yet in every single case Brett just kills these goons and never stops to interrogate them – like even simple “Who sent you?” sort of stuff. I mean it’s great the action’s there and all but still, Brett comes off kinda stupid. He knows there’s a mysterious figure behind the industry, one whose existence is almost a legend, and clearly it’s this dude sending out the thugs…and Brett could work his way backward from them, but never considers the idea.

Brett again displays his bizarre talent for using random objects to kill; he doesn’t take out as many people this time, and the violence is for the most part bloodless, other than the occasional mention of blood or brains. He kills with chopsticks, quarters, a mouth pellet, a knife, a blowgun, the pole of a street sign, and even a ninja sword which has been modified so that it hides inside his “ninja belt.” For the most part each “fight” is over quick and features Brett outmatching his opponents to absurd degrees. There’s never any sense of danger for him, so the author has to resort to placing Jeff and ultimately Sam in danger, as they both find themselves about to be the unsuspecting stars of a snuff flick.

But Brett disappears for too many portions of the narrative, with the author focusing on Cedric Gregg, the “king” of Hollywood’s illicit underground industry. He’s one of those criminal masterminds who just goes around killing any underling who has displeased him. We get arbitrary scenes of him killing such and such a porn-world figure, usually for having slipped evidence of Gregg’s connection to the industry. There’s a lot of squirm-inducing stuff with Gregg cavorting with his favorite passtime: young boys, one in particular whom Gregg is trying to woo with a new print of The Empire Strikes Back. It’s really all beyond outrageous so far as the kid stuff goes, and the author does himself no favors with having some of the child “actors” talk like veteran professionals: “I think this chick and I both know why we’re here,” as a ten year-old “star” of one of Gregg’s films says of his seven year-old costar.

Brett’s also not the most proactive of men’s adventure heroes in this particular volume. Early on Sam tells him of a woman she’s met whose daughter was taken by the lady’s estranged husband and put into porn flicks – the law, by the way, is humorously incapable in The Skin Swindle, with the vague explanation that “payoffs” allow the sleazebags to make their movies without any legal or punitive repercussions. Anyway Sam’s concocted a plan for this lady to visit a notorious “producer” and give him a b.j. in his office, something the producer expects of all his female guests, whether she be adult or child. After the oral servicing the producer’s schtick is that he goes off into his private restroom to clean up, and leaves the woman/girl in the office alone. Well, Sam says this lady can pretend to be someone else, do the oral job, then look through the producer’s files while he’s in the restroom and find the address where they’re keeping her daughter.

I figured Brett would come up with some augmentation for this plan…but instead he tells Sam to make it happen, then he and Sam wait in a diner for the lady to call them after she’s gotten the address! It’s like that throughout; Brett spends at least 30% of the narrative in various restaurants or diners, one of them a dive frequented by kids who are looking to get picked up by adults. (No, it’s not a pizza parlor!!) After checking the grungy place out – and the grizzled owner of the joint, by the way, steals the entire book with his acidic temper – Brett sends Jeff back, to pose as a teenager looking for a sugar daddy! This of course leads to yet another moment in which Jeff is abducted and Brett has to save him.

Oh, and the whip-wielding cover babe does finally appear; we see the makings of one of Gregg’s snuff flicks, and the babe is in full s&m getup and whips some manacled dude to bloody ribbons, then slits his throat. She factors into the finale, an outrageous snuff-kiddie-Nazi exploitation extravaganza which is to feature Jeff and Sam in supporting roles against their wishes, but curiously she is the only person Brett decides not to kill. The author even goes out of his way to have Brett explain why he doesn’t feel the need to kill her (she’s powerless in the scheme of things, or something to that lame effect).

The novel ends with Brett and Jeff heading back to San Francisco and Sam certain that she’ll “never forget” Brett. And this was it for the mystery author; Ric Meyers wrote the next volume of the series, which was to be the last. After which Meyers, still posing as “Wade Barker,” brought Brett and co. back for two ensuing series, which ran for four volumes each: Year Of The Ninja Master and War Of The Ninja Master.
Posted by Joe Kenney at 6:30 AM

The author of the odd number Ninja Master books was Stephen Smoke, author of Carpenter, Detctive, and a handful of thriller novels...

Hey Paul, thanks for the comment! You know, the Smoke thing is kind of a mystery. Pat Hawk's book lists him as the author of the first volume only. Years ago I came across something online written by a person who knew Ric Meyers. I can't recall where/when I got this info, but I saved it to a Word document. This person wrote:

"I don't know who wrote the first Ninja Master ("Vengeance is His") and the others Meyers didn't write ("Skin Swindle" and "Borderland of Hell"). Ric didn't even know. He did note that the first Wade Barker ripped off Batman and Death Wish, and also knew very little about martial arts. Ric told me there were possibly two others [authors on the series]. A guy who wrote the first volume and another who wrote the other three. Ric wrote MOUNTAIN OF FEAR and MILLION DOLLAR MASSACRE under the restrictions of adhering to the already-prepped cover art and back cover synopsis. The author of the first book wrote those but his manuscripts were rejected."

From this and the Hawk's entry I assumed Smoke had only written Vengeance Is His, then Warners dropped him when they rejected "Mountain Of Fear" and hired some other guy to write the odd volumes. However, it could be that Smoke wrote the first volume, had his second volume rejected, but then went on to get his other manuscripts published (ie the 3rd, 5th, and 7th volumes). If I'm not mistaken, the first volume also mentions Steely Dan and makes Brett Wallace more of an everyday guy, so it's possible the same author did the other odd volumes, and it's not just a case of a new author trying to stay true to what had been established in the first volume.