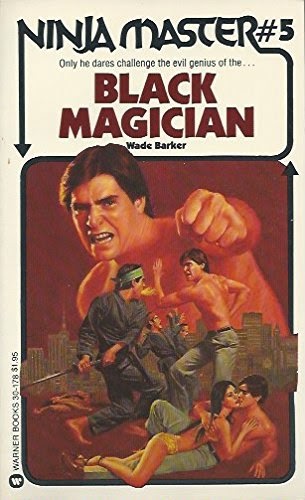 Given that the Ninja Master series was an obvious cash-in on the success of Eric Van Lustbader’s The Ninja, I guess it was only a matter of time before an installment of the series ripped off the novel itself. If you’ve ever wondered what it would be like if someone took Lustbader’s book and trimmed off all the fat, then you should check out Black Magician.

Here’s my understanding of the Ninja Master series: Stephen Smoke wrote the first volume, and then turned in a manuscript for the second volume. But Warner Books rejected Smoke’s manuscript and hired Ric Meyers to write a new novel based on the already-created cover art; they then hired Meyers to do the same thing for the fourth volume. Meanwhile, Warner hired some other author to write the third volume, and this person went on to trade off with Meyers, with Meyers writing the even volumes and the mystery author writing the odd volumes.

I’d love to know who this guy (or girl?) was, because he’s pretty good. My assumption going in was that Meyers’s novels would be superior, but that might not be the case; the quality of these two authors is about the same. They both know how to write good pulp, they both deliver the martial arts violence, and they both enjoy doling out the sleaze; so far, neither is more outrageous than the other, though Meyers appears to offer a bit more gore. However, this author features more lurid and kinky sex, usually involving Japanese women being debased and tortured.

There are other differences between the two authors. Meyers appears more knowledgeable about ninjutsu, and has hero Brett Wallace using a host of exotic ninja weaponry with which he skewers his opponents in bloody fashion. Meyers’s version of Brett also often dons a ninja costume in his battles. The mystery author’s version of Brett Wallace is more of a martial arts superman, capable of inhuman feats, and he not only doesn’t wear a costume but seldom if ever uses any ninja weapons. In fact, he’s more fond of turning everyday objects into weapons, like shoelaces.

Also, this author delivers a more human Brett – he occasionally drinks, he jokes, and he swears a lot. Compare to Meyers’s almost robotic force of vengeance, who sometimes comes off like Richard Camellion on a bad day. Finally, the mystery author is much more concerned with staying true to Stephen Smoke’s first volume, often referring back to the events that happened therein; he also employs Kung Fu inspired sequences where Brett will flash back his days of ninja training and the bursts of wisdom he received from Master Yamaguchi. Meyers never does this; his version of Brett Wallace has advanced far beyond the need to reflect on past training.

Anyway, Black Magician. Take the plot of Lustbader’s The Ninja, add a little more sex and violence, change the names of the characters, make it a lot shorter and a whole lot more entertaining, and you’ll come up with this book. An evil ninja is afoot in San Francisco, killing off older men who were part of a commission that was tasked with rebuilding Japan after World War II. Meanwhile, this same evil ninja is getting his rocks off murdering Japanese hookers in SanFran massage parlors.

The commission members are dying of natural causes, but it’s obvious they are being murdered in some unknown way. Also, they each receive death threats shortly before meeting their end, and the threats are accompanied with strange Japanese characters. The cops hire a Japanese professor at Berkley who eventually determines that these characters are obscure ninja symbols. Gradually Lt. Bill Wright, who has been put in charge of the investigation, is put in touch with Brett Wallace, who decides to help the cops bring in the evil ninja – just like Nicholas Linnear agreed to help Lt. Croaker in Lustbader’s book.

The sleaze is afoot as “The Oriental” (ie, how our author constantly refers to our mysterious evil ninja, who eventually is revealed to be named Seikiei Kojiro) visits various massage parlors, always demanding a Japanese whore. He turns down the constant offers of an “Oriental” girl (the word “Oriental” is used about a zillion times in the novel, by the way); he wants a Japanese girl only. And when he gets her, he will offer her money and then debase her, demanding she repeat the words “I am a Japanese woman without honor” as he sodomizes her – killing her once he’s finished!

Meanwhile Brett himself is getting some good Japanese lovin’ via Rhea, his “no commitments” bedmate who owns the Rhea Dawn restaurant. Unlike in Meyers’s installments, this version of Rhea isn’t as involved in Brett’s war upon crime and injustice; nor this time is Jeff Archer, Brett’s younger pupil who is slowly learning the ways of the ninja. Once Brett realizes that an evil ninja is in town, he tells Jeff to stay away from him – for, Star Wars style, Brett fears that the evil ninja will tap into some sort of force and realize that there’s another ninja here in San Francisco…!

This author’s previous installment, Borderland Of Hell, clouded the sleaze element and slowed the pace by having Brett go into investigator mode through most of the novel, going around and asking one-off characters various questions. Luckily there’s none of that this time, and the author keeps things moving throughout, with more members of the seven-man commission dying “naturally” just hours after receiving their death threats. They’re all in town, by the way, as they’ve been invited by David Watanabe, a 60 year-old billionaire who became rich decades ago due to his bribing of the commission.

Obviously, these murders are payback; the commission was notorious for taking funds away from established, already-wealthy people and corporations in Japan and turning the money over to upstarts like David Watanabe. So, just as in The Ninja, these modern murders are rightings of wrongs made back in the years immediately after WWII. And just as in Lustbader’s novel, Brett gradually realizes that the evil ninja is a legendary figure he’s run into before, a man who killed off a few members of Brett’s ninja clan back in the day, including Brett’s best friend there.

Brett and Lt. Wright develop a relationship clearly “inspired” by that between Linnear and Croaker, with Brett even working for the cops only if they promise never to look into his background or attempt to find out what his real name is (apparently he’s afraid of the ramifications if they discover that he’s the guy who killed all those bikers back in the first volume, or something). Not until the cops deduce that the recent hooker murders might be by the same guy killing the commission members does Brett put two and two together and realize that the killer is none other than Seikiei, a legendary ninja who is more myth than man.

In fact Brett isn’t much help to the cops, and can only stand by as another commission member dies; meanwhile, Seikiei shows up in David Watanabe’s penthouse and sodomizes the dude’s Japanese mistress, forcing him to watch! Later Watanabe too is killed, with Brett not there in time to save him – however, in the meantime, Brett has saved the final two members of the commission, using an acupressure massage to ward off what he’s discovered is behind the murders: the legendary “touch of death.”

The story climaxes with a Brett/Seikiei match on top of Mount Tamplais at midnight; the Black Magician briefly kidnapped Rhea (she assures Brett that she wasn’t raped) to have her issue the summons to Brett. Instead of going straight into an action scene, the author instead doles out blocks of exposition, as Seikiei reveals that he was the son of David Watanabe’s partner, a man Watanabe murdered many years ago while he was bribing the commission. The two ninjas just stand there talking until they finally get to the fighting.

Again, this is nothing like the Meyers presentation of the character and his skills, with Brett basically flipping around and doing karate moves instead of decimating Seikiei with exotic weapons. He doesn’t even dispatch the villain in a novel way, instead thrusting himself and Seikiei off the mountain and grabbing hold of his sword (which he’s wedged into the earth) at the last second, to dangle there as Seikiei plunges to his death on the rocks hundreds of feet below. And that’s that; Brett happily returns home to Rhea, telling Lt. Wright it’s all “finally over.”

Like I said, this mystery author isn’t bad when it comes to pulp writing. The action scenes are pretty well done, usually featuring Seikiei taking out his opponents before they can even blink. The author retains his fondness for having characters employ everyday items in deadly ways, most notably when Seikiei takes out a cordon of police with nothing more than coins, burying them in their foreheads with a savage flick of his wrist. The author also incorporates a supernatural bent with the revelation that Seikiei can even spit fire out of his mouth, something depicted on the plot-faithful cover.

Also the dialog is good, with colorful cursing from the various cops. A downside is the author’s tendency to spin wheels with repetition, again usually via dialog, and also the fact that his version of Brett Wallace sort of comes off like a well-dressed flake who seems to enjoy drinking Perrier a little too much. In this author’s hands, the series loses the savagery it has under Meyers’s authorship, so I have to say I still prefer that author’s contributions.
Posted by Joe Kenney at 6:30 AM

dear joe, as far as I can see you've missed out on the wackest kung fu paperback series of all k'ing kung fu by marshall macao go treat yourself to some Taoist kung fu maniacs beating the crap out of one another while the fate of the world hangs in the ballence.
john

John, I've only got one volume of that series, but I'll be sure to read it soon -- thanks for the recommendation!