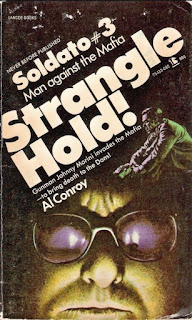 Gil Brewer takes over the Soldato series with this volume; he’ll remain for the next one. It’s clear he read the previous two installments, courtesy Marvin Albert, as Brewer often refers back to the events of the first and second volumes. I was curious to see how Brewer would handle men’s adventure, and for the most part he turns in the same sort of book he was known for: a hardboiled yarn heavy on suspense and tension, with little in the way of the action or thrills you’d get in, say, the average installment of The Executioner.

Speaking of which, Brewer wrote a never-published volume of The Executioner in the ‘70s, and it was always my suspicion that he was going to be Pinnacle’s next “Jim Peterson,” following on from William Crawford’s Sicilian Slaughter (aka the infamous sixteenth installment of the series which creator Don Pendleton never even read). The other year I had my suspicion confirmed when I discovered that Brewer’s unpublished manuscript was indeed titled Firebase Seattle, a title Pendleton himself eventually used, given that Pinnacle had already come up with a cover for it (as Pendleton relates in A Study Of Action-Adventure Fiction). However Brewer’s yarn would’ve been the true sequel to Sicilian Slaughter that we never got, and I’d love to read it…but it costs a whopping $200 for a jpeg copy of the 240-page manuscript which currently resides in the Gil Brewer collection at the American Heritage Center.

Judging from Strangle Hold, though, those two hundred bucks might be better spent elsewhere; while Brewer’s writing is fine, delivering much more character depth for titlular Soldato Johnny Morini than previous series author Albert ever did, the story ultimately fizzles out into too much stalling and repetition, and Brewer constantly fails to exploit his own material. The book is also much too long, coming in at 222 pages of small-ish print – however Brewer is too much the pulp veteran to turn in a slow-moving tale. Even though not much happens, it always seems that something is about to.

But the first half is really nice because as mentioned Brewer gives Johnny a lot of depth. We meet him as he’s still holed up in Los Angeles, drinking more than he should, and still thinking about his ex-wife, last seen in the first volume. Johnny even goes to the trouble of visiting her, only to be told by her mother that she’s not home; a cool scene here as the phone rings, Johnny’s ex mother-in-law answers it, and it turns out to be for Johnny. Brewer captures the general paranoid vibe of the ‘70s here, with Johnny constantly being monitored by Riley, his ex-Fed handler; Riley later even informs Johnny that his ex was upstairs all along, and her mom was lying to Johnny.

This thread is dropped, though…and folks believe it or not there’s zero female companionship for Johnny in the entire novel. In fact Brewer doesn’t even deliver any exploitation of the novel’s sole babe; from Play It Hard I assumed we’d at least get a bit of that, but Brewer’s very conservative here with the sex and the violence. For the most part Strangle Hold is just a Mafia novel, with Johnny going deep undercover as an L.A. bigwig, sent down to Tampa to oversee the activities of the Florida mob.

Riley doesn’t appear much, this time. He summons Johnny to a dingy hotel in New Jersey, turns him over to another handler, and heads out. Johnny’s assignment is to fly back to L.A., take out a guy named Frank Lott, and head down to Tampa to bust up Don Remo Paragluci, who seems to be putting together a combine with two other Florida dons. Lott is a member of the Syndicate Committee or somesuch, basically the corporate wing of the Mafia which ensures all the various “franchise” families stay in order. Then Johnny’s new handler is blown away – the novel opens with Paragluci knowing that the Feds are onto him, and sending someone off to kill Riley – and Johnny runs from the cops, who think he’s the one who pulled the trigger.

Once Johnny’s captured the real Lott, interrogated him, and left him tied up for Riley to collect, our hero flies down to Tampa…and here the novel loses its frenetic pace. As “Frank” Johnny bulldozes his way through Don Paragluci’s domain; Johnny’s idea is that it’s “expected” he’ll be a hardass, given that he’s from the Committee, so he pushes boundaries at every opportunity, constantly testing the old don’s temper. He also runs afoul of little Nevito, Paragluci’s creepy younger son; Paragluci’s older son has recently been blown away during an attempted hit on soldatos from a rival Tampa don.

This guy’s widow provides the babe quotient for Strangle Hold; she’s a hotstuff beauty named Lucia who likes to go around in her bikini. Even though her husband’s been dead just a few days, she’s throwing looks at “Frank Lott.” But Brewer ignores this element and goes for a heavy suspense vibe; Don Paragluci, who is prone to sitting around in his office and staring at a print of a Picasso painting he much admires, is planning to get together with two other dons and start up a combine, whether the Committee approves or not. There’s a ton of talking and scenes of fat old Italian guys going over plans for the takeover and whatnot.

Despite the threat of a war with another family hanging over the proceedings, nothing much really happens. Johnny gets reproachful looks from Nevito and continues to bully old Don Paragluci. Then things get weird. Nevito gets jealous when Lucia decides to go to dinner with “Frank,” and Nevito rapes and kills the poor girl off page…this like a day after she’s buried her husband. And what does Johnny do when he finds out? Tells Don Paragluci, who basically shrugs it off as yet another indication of his young son’s growing insanity. I mean there’s no part where Johnny takes up his .38 revolver (which he’s somehow able to screw a silencer onto) and vows revenge, mostly because he’s too concerned about blowing his cover. One hopes Mack Bolan wasn’t similarly emasculated in Brewer’s unpublished Executioner.

But it gets more weird…almost a dark comedy in that Nevito keeps trying to screw over Johnny, suspecting somehow that this Frank Lott is an imposter. Yet in every case someone else saves Johnny’s skin, all of them turning in Nevito’s duplicitous actions to either the don or to Johnny himself, so as to stay in good with the Committee. And it’s very messy, too; Brewer introduces one soldato, mentions that he’s a serial killer, and intimates that he and Johnny might be matching up soon…then the serial killer soldato goes to “Frank” to tell him that Nevito’s up to no good! After which the character is brushed back under the narratorial carpet.

Only in the final pages is there any tension. This comes through two acts: first Nevito snaps a photo of “Frank” and sends it to LA to ensure this is really the right guy. Secondly Johnny decides to heist the real Picasso Don Paragluci loves so much(!?). Conveniently, it happens to be at a nearby Tampa museum. This happens after Nevito has failed to steal the painting, desperate to impress his dad, and is nearly caught in the bargain. Another incident the don decides to forget. So Johnny goes off on his own and steals the painting in a tense but protracted and arbitrary sequence, particularly given that it happens toward the very end of the novel.

The absolute worst part is that Johnny is a bystander in the climax. Riley’s shown up and attempts to stop the mail and prevent Nevito’s package of photos from getting through, but fails, and now the clock is ticking. Johnny quickly sets up the various dons so that they converge on a restaurant, then works Don Paragluci up into a lather and sends him and his boys off to wipe them out. Johnny gets in a car chase, trying to prevent a group of thugs from getting to the restaurant before the don – lamely enough, they just got a phone call from L.A. telling them “Frank Lott” is an imposter.

But all the various villains gun each other down while Johnny watches from afar. Even little prick Nevito, who we’ve waited for Johnny to blow away the entire novel, is rendered his comeuppance by a squad of cops who show up on the scene, having been summoned by Riley. After this Johnny hops in a car with Riley and heads home, bitter about the life he leads…perhaps not nearly as bitter as the reader for having endured such a subpar but initially-promising book.

Don’t get me wrong, Brewer’s writing is fine, save for a strange fascination with the recurring phrase “beneath the wheel” every time a character gets in a car to drive (ie “Johnny got beneath the wheel”). This phrase was a new one to me; I mean I can see “behind the wheel” as making sense, but “beneath” makes it sound like all the characters are midgets. Anyway, here’s hoping Brewer’s next one is better.
Posted by Joe Kenney at 6:30 AM