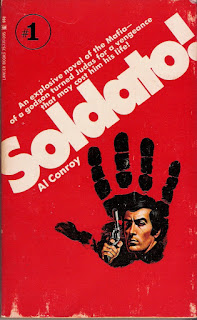 Starting off a five-volume series, Soldato! reminds me a lot of The Revenger #1 by Jon Messmann, both in plot and how it comes off like a standalone book…one that just happened to initiate a series. The novel is credited and copyright Al Conroy, which is one of the many pseudonyms used by Marvin H. Albert (aka Nick Quarry, Ian MacAlistair, etc). He wrote the first two volumes and the fifth one; volumes 3 and 4 of Soldato were written by another old hardboiled author, Gil Brewer. I’m looking forward to those.

The titular character of the series is only referred to as a “soldato” (aka Mafia soldier) in passing; his name is Johnny Morini, and he hasn’t been in the mob for a while, thus the title of the book (and series) is a bit of a misnomer. But I guess “Soldato!” has more of a ring to it than “Morini!” Johnny, now 29, was raised in the mob; an orphan who grew up on the tough streets of New York, running various “kid-gangs.” Eventually he became the top soldier of Don Renzo Cappellani of Manhattan.

But now Johnny (as Albert refers to him throughout) is living in the Witness Protection program, hiding out as “John Hawkins” in a desolate Utah town. Don Renzo desperately wants to find him – and kill him. For some reason Renzo doesn’t understand, Johnny “went crazy” a few years ago, turned against the don, and actually served as a witness in a trial against him; a trial which was ultimately thrown out of court. But Don Renzo looked bad, despite getting off, and wants to kill Johnny as an example.

Eventually we’ll learn that the don, via one of his many underlings, killed off Johnny’s sort-of foster father, and also had his sort-of foster sister gang-raped (she later jumped off a roof and killed herself). This is how he unwittingly incurred Johnny’s wrath. Johnny vowed revenge, killing off the murderer of his foster father and setting his sights on the underling who had ordered it. When he was arrested in the attempt, a Federal lawyer named Riley offered Johnny the chance to take down the grand poobah himself, the man who’d been behind it all from the top: Don Renzo. Johnny agreed to testify that he took part in Don Renzo’s murder of a rival don five years ago.

Even though the trial failed, thrown out when Renzo’s lawyers made a mockery of “star witness” Johnny and his troubled, crime-ridden past, the government upheld its bargain and set Johnny up with a new life in a new town. Meanwhile a former cop turned private eye named Charles Moran has been doggedly seeking Johnny for the past year, paid well for his efforts by Don Renzo. After much trouble – which is elaborated on a bit later in the novel – Moran has tracked various Federal receipts and come upon a “John Hawkins” here in Utah, who owns a country store and lives on a small home near a factory. The novel opens as Moran confirms it is in fact Johnny Morini. (And yes, it does get a little confusing that two of the main characters are named “Moran” and “Morini!”)

As for our hero, he takes a while to appear, and truth be told Albert doesn’t spend a lot of the narrative with him – and doesn’t do much to bring him to life, either. The fact that Johnny was a murderous young punk is sort of glossed over. He’s fearful that Don Renzo will someday find him, not that this has prevented Johnny from marrying a sexy young gal from California named Mary. To again differentiate from the men’s adventure norm – and another parallel with The Revenger – is that Mary is three months pregnant. She has no knowledge of Johnny’s past, only a fake story that he “owed money” to some bad people and the government set him up with this new life here.

Moran comes into Johnny’s store one morning and Johnny suspects something as soon as he sees this stranger; this is one of those places where everyone knows everyone. Also, it occurs to Johnny that night when he can’t sleep, Moran has “cop eyes,” something Johnny learned to spot long ago. He’s gotten paranoid before but he’s certain Moran is the person he’s been afraid would come here someday. And of course he is; after a phone call to Don Renzo, a pair of guys who look like “cowhands” are sent to Moran. These are professional hunters of men.

The majority of the text is given over to a practically endless chase these two put Johnny through in the desert; pages 59 to 107 of the novel, in fact. Johnny, urging Mary to leave town the next morning, spots an unfamiliar car coming down the road and hops in his Mustang with Mary, the hunters in pursuit. Johnny ditches Mary and takes off on foot through the rough terrain. The two hunters pursue. Luckily Johnny has a .38 and a rifle for this very occasion, but the hunters have carbines with telescopic sights.

What with the drawn-out suspense of man hunting man in the harsh desert, this entire sequence has the vibe of a western, particularly with the carbines and rifles being used. You can almost hear the Sergio Leonne music. While it’s all suitably tense and thrilling, personally I prefer more gun-blazing sort of action; I felt this bit just went on and on. City-boy Johnny has spent the past year learning the area, hunting with the locals, and due to his newfound knowledge of the desert he’s able to (gradually) turn the tables on his hunters, so that hunter becomes prey. Also to note is that Albert doesn’t dwell much on the violence; this is one of those novels where people just get shot and fall down – no exploding fountains of gore or geysering jets of cerebrospinal fluid, more’s the pity.

Actually, Soldato! is really just comprised of a sequence of chase scenes. Immediately after this long chase is over, we get another, as Moran, who was waiting for the two hunters to return, spots Johnny escaping town and gives his own chase, gradually tailing him all the way back to New York. Johnny has decided to take the fight to his old boss; only with Don Renzo’s death will he be free. Moran remains in the narrative, appearing sporadically; he gets more money from Don Renzo, and even when he loses Johnny in the city he tracks him down via Mary, who, against Johnny’s orders, ends up phoning her mother from the boarding house in Hackensack, New Jersey Johnny has deposited her in.

Meanwhile Johnny runs from shadow to shadow in New York, hunted by the don’s endless legions of men. Albert to his credit doesn’t give the book an ounce of sap; while Johnny knows all of these men, and indeed some of them were his “sidekicks” in that old gang, there’s none of the “but we used to be brothers!” bullshit there would no doubt be in a modern take on this story. These guys are out to kill Johnny, period, and Johnny’s out to kill them first.

But he has grander designs for Don Renzo. Calling up Riley, that old Justice lawyer, Johnny claims he’s going to “get” the don for real this time. Not kill him, but something else. What Johnny does is bust up another old acquaintance, this one a drug dealer, and makes off with all of his coke. He then breaks into a dry cleaners with the Don’s clothes and sews the packets into one of the jackets. Johnny also gets in a few more chases from various Mafia goons, including the occasional shootout, one of which leaves Johnny half-dead, with a shot-up left arm and a bullet in the ribs.

The most unusual character in the book only briefly appears: Doc Miller, a fallen-from-grace doctor who now operates out of a flophouse with a pair of nude teenaged girls at his beck and call! He patches Johnny up, tells him he’s gonna die soon – but be sure to pay up first – and gives him a handful of codeine pills. And this is our hero for the last few pages; rather than the slam-bang action finale we might’ve expected, we instead have a practically comatose, zombielike Johnny camping out in the dingy apartment he’s rented, across from Don Renzo’s headquarters in Brooklyn, watching through binoculars and waiting for the day the don shows up wearing one of those special jackets.

It’s pretty trying, for sure…page after page of Johnny stumbling in a dying funk from bedroom to bathroom, praying that this is the day the don shows up in a coke-lined jacket. Johnny lives off grungy tap water and codeine pills, his left arm numb and every breath killing him. Thus it is as big a relief to the reader as it is to Johnny when the don finally shows up in one of those jackets and Johnny calls Riley – who, realism be damned, swoops in with a bunch of cops and whatnot and summarily arrests the don on the spot, even if it’s clear he’s been framed as a drug-runner.

The novel ends with a flashforward to two months later; Johnny’s mostly recovered, if a bit battered and bruised, and he and Mary head off to a new life, with a new name, in Denver. Johnny’s been saved, in a very nice bit of character-redemption, by none other than Charles Moran, who, upon finding out Don Renzo has been arrested, quickly figures out that whoever called the cops had to be someone within viewing distance. In this way he’s come upon Johnny, lying mostly dead in his apartment, and it’s Moran who calls the cops for him, something Johnny is never to learn. Moran’s even hiding there in the airport as Johnny and Mary fly off.

This would appear to be the end of Johnny Morini’s story, but four more volumes were to follow. I figured something had to happen to Johnny’s wife and kid, otherwise why would he get back into mob busting? And sure enough, checking Marty McKee’s review, I see that in the next book Albert “discard[s] the wife and child via divorce and miscarriage!” Well, that’s….depressing.

Overall I enjoyed Soldato!, which is written in that firm, assured manner of an old hardboiled/pulp master. But while his writing is economical and fast-moving, Albert is an unrepentant POV-hopper; one paragraph we’re in one character’s perspective, and the next, with no warning or white space or anything, we’re in the perspective of someone else. This is particularly annoying in the chase scenes – we’re with Johnny as he desperately races through a canyon, then in the very next sentence we’re in the perspective of the men chasing him. This commits the ultimate author affront of pulling the reader out of the fictive experience, and to this day I still can’t understand why some writers don’t realize it!
Posted by Joe Kenney at 6:30 AM

It seems like Albert sort of updated his Jake Barrow character for a Men's Advenutre series.

Love all of Marvin H. Abert's work under all of his psuedonyms!

I ended up reading all five Soldato books, but out of order. I need to sit down with them again and this time read them chronologically. I liked all of them, though it's weird that the first three each feature Morini being chased through the countryside by a pair of gunsels.