The Vigilante #3: San Francisco: Kill Or Be Killed 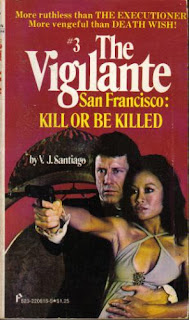 The harried life of Joe The Vigilante Madden now takes him to San Francisco, not even a whole day after the awesome previous volume. For that matter, his wife’s murder, which set Madden on his vigilante path, wasn’t even two weeks ago. I didn’t have big expectations for this series, but I’m really enjoying it; while this volume doesn’t hit the sleazy highs of the previous one, it is still pretty fun, and certainly fast-moving.

As we’ll recall, Madden was sent from Los Angeles over to San Francisco at the end of the previous volume to do an interview for his engineering firm. Madden’s day job has never really gotten in the way of the vigilante stuff, much to the credit of Robert Lory (aka “V.J. Santiago”), and this time it factors barely at all. Madden is a full-blown dispenser of brutal justice now; there’s an almost postmodern bit where he does his own killcount, totaling the number of slimebags he’s wasted at 23 (he’ll add 8 more to the total by novel’s end).

There are some nice callbacks to the previous book, mostly due to the public shock over the news in the morning paper – famous singer Johnny O. has been shot dead in LA by an unknown killer. Madden chuckles to himself over this; Johnny was the guy who was running a sex-slave business, of course. And while Madden opens up the novel – and his trip to San Francisco – by taking out a random murderer (a memorable opening which sees Madden posing as a Mafia rep, “interviewing” the dude, and then blowing him away), the basic drive of the series is gradually lost.

Instead, I had bad flashbacks to Jason Striker; Lory takes his hero to Chinatown, and fills up too many pages of Madden “playing” judo and karate and learning tai chi. It just sort of goes on and on, and you wonder when Madden’s going to start randomly gunning down muggers and drug dealers and whatnot. In fact, the very drive of the series is for the most part gone until the final quarter of the novel. But at least Madden gets laid this time – this is the first volume yet to have any sex.

Lory is one of those men’s adventure authors who knows exactly what the genre expects of him. While he doesn’t go for full-blown gore he’s sure to include lots of lurid stuff, some sleaze, and a general exploitation vibe. This latter is mainly accomplished via lots of racial and derogatory slurs, proven immediately with Madden’s interview of the potential hire for his company, who turns out to be a young Chinese man. In a hilariously pre-PC “job interview,” Madden outright questions the young man’s lack of a wife or girlfriend: “Maybe we want to be sure we don’t get a fag on the payroll.”

The two go to dinner in Chinatown that night, and toward the end of the meal the old owner of the place rushes out into the kitchen with a broken neck and dies in front of everyone. In the melee Madden runs into an old pal from the Korean War: Harry Chan, a tall Chinese-American who provides most of the invective this time, referring to his fellow Asians as “slant-eyes” and whantot. Gradually we’ll learn he hates himself for being Asian.

The potential employee takes off, flying to New York the next morning for an appointment at the corp office, while Madden and Harry hit Chinatown. Harry tells Madden that the old restaurant owner was likely murdered by the Scarlet Fist, a sort-of Tong made up of “punks” whom Harry says are nothing more than “common muggers” that wouldn’t even draw any attention back in Madden’s hometown of New York. They’ve been shaking down the various business-owners in Chinatown, threatening them to pay up protection money or else. The neck-broken old restaurant owner is the first representative of the “or else.”

Harry himself owns various businesses, from a restaurant of his own to a karate school – and yes, karate, not kung-fu! – with a “massage parlor” next door. Here’s where Lory doles out the first outright sleaze yet in the series, as it’s one of those massage parlors, filled with ultra-sexy Asian babes in clinging silk robes; the patron picks out which one(s) he wants and heads on up to a private room for a “massage.” After a bit of judo practice in Harry’s dojo with the sexy secretary, Mary Loo(!), Madden heads on over to the massage parlor, where Mary Loo herself picks out two sexy Asian babes to give Madden his rubdown.

Lory’s sex scene is similar in style to the ones he wrote in his John Eagle Expeditor installments, though this one is for the most part of an oral nature. It goes on for a few pages, with the gals bathing Madden, oiling him up, then taking turns on him (“a playful game to determine who was to have custody of Madden’s love equipment,” aka his “throbbing rod”). Then Mary Loo shows up with some Johnny Walker Black and introduces herself as the main course. Curiously, Lory keeps this scene off-page, but Madden and Mary become something of an item, with Mary growing to love Madden (even though the book only occurs over two days). Madden, despite his growing feelings for her, gives her a sort of brush off, because being a vigilante who might get blown away at any moment, he can’t get involved with anyone.

Speaking of the vigilante stuff, it disappears for a large portion of the book. Instead we get many parts where Mary teaches Madden new judo moves or some basic tai chi, and Lory isn’t shy with the exposition on the various forms. Only late in the game does Madden get more involved in this whole Scarlet Fist business, especially after Harry calls a meeting of his fellow Chinatown businessmen and discuss what to do about the threats, insisting everyone speak English so Madden, who watches from a secret window, can follow the conversation.

When the spineless businessmen refuse to do anything but pay the thousand bucks demanded each of them, Madden decides to handle affairs himself. Dressed in his customary trench coat, armed with his .38 (for which he only has nine bullets left), and now wearing a Spider-esque “slouch hat,” Madden flits across the shadows of Chinatown, trailing various Scarlet Fist thugs as they go to collect their payoffs. The gang members wear long coats themselves, faces masked, and Madden blows a couple of them away – here though we get the first indication of an annoying trick Lory pulls in the final quarter; he’ll have a sequence from the perspective of one of the businessmen, who will be shocked when Madden shows up to dispense bloody justice, and then the next chapter he’ll cut over to Madden so we can see how it all came to pass. So basically you read each sequence twice.

Madden next shadows a guy on the Fists’s collection list who happens to be a “whore-master” who runs his own cathouse. Our hero ends up killing this dude himself, blowing him away and then taking his weapon, an automatic pistol of unspecified make or caliber. But at least Madden’s “personal armory” is now up to two guns. Lory pulls a fast one on readers when Madden, who really hasn’t done much about the Scarlet Fist until the final pages, suddenly deduces who their leader really is – spoiler alert, though everyone will see it coming: it’s Harry himself.

Our hero scores another kill, this one sleazy as can be, as he brains a dude with a dumbbell as he’s sitting on the toilet! He takes out two more Scarlet Fist hatchetmen before he engages Harry in the final confrontation. It’s a bit contrived as Harry is by turns evil and contrite, even begging Madden to recall how they were once best buds. But Lory at least doesn’t go out on a maudlin vibe, with it all just a ploy on Harry’s part – one that fails as he finds himself staring into the barrel of Madden’s .38.

Lory doesn’t wrap up the Mary Loo subplot, ending the quick tale here, but here’s betting she’s just a memory by next volume’s beginning. But “quick” does sum up Kill Or Be Killed, and Lory’s writing is so assured that you’re finished the book in no time. It might not reach the sleazy highs of the previous one, but it’s still an enjoyable read.

Oh, and this was the last volume to sport a photo cover – I’m gonna miss the “pissed-off Greg Brady” who served as the cover model.
Posted by Joe Kenney at 6:30 AM