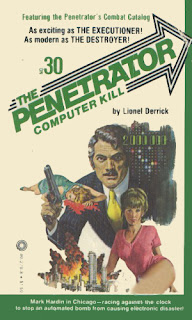 Chet Cunningham turned in this 30th installment of The Penetrator; Cunningham recently passed away, and I don’t want to speak ill of the dead…but this book sucked!! I mean, it was one of the worst “men’s adventure” novels I’ve ever read…down there with Cunningham’s earlier #22: High Disaster. Seriously, I know it had to be a bitch to keep turning in these manuscripts year in and year out, but still…like I wrote in an earlier Penetrator review, someone at Pinnacle shoulda said to themselves, “You know, maybe we need a new Lionel Derrick.”

Just as in High Disaster, Cunningham turns in a volume that has precious little in common with those that came before it…Mark “The Penetrator” Hardin is retconned into a computer-savvy security expert…the villain is a lame-handed electronics engineer….and there’s practically zero action in the entire book, other than one hilariously-arbitrary fight. Indeed, the majority of Computer Kill is made up of ALL CAPS COMPUTER FONT as “main villain” Hector Lassiter, the aforementioned electronics engineer, hacks into the virtual coffers of the Bainbridge Corporation.

In many ways Computer Kill is prescient in how it is focused on cyber theft, security, hacking, and identity theft. Cunningham had clearly researched this nascent field – these were the days when a good PC system could take up a whole room – and was aware of the dangers it presented. He was right on the money with all the nefarious things a good computer hacker could do. But as Zwolf so accurately and succinctly said: “You want to know a secret? Technology isn’t very interesting. In fact, it makes things boring.”

And if nothing else, Computer Kill sure is boring. When we meet him, Mark Hardin’s already in Chicago, checking out this latest threat which has captured his interest – the dwindling profits of a large corporation called Bainbridge. Yep, folks, “The Penetrator” has suddenly become interested in financial matters. He poses throughout the book as an IRS security specialist, and I kid you not, there are endless sequences where he goes through pages and pages of financial data with Barbara Simpson, the hotstuff computer director babe who is running Bainbridge in all but name, given that Jethro Bainbridge, ancient founder of the company, hasn’t been seen in years.

But really Mark is a supporting character in his own book. The real star is Hector Lassiter, a nutjob computer whiz who was fired from Bainbridge a few years ago after a hand-crippling accident he suffered on the job. Now he’s sworn revenge, which he’ll reap via extortion. At egregious page-length we will read as Hector gets the various codes for various Bainbridge accounts, hacks into the system (all of it tediously described via ALL CAPS computer commands) and makes off with increasing amounts of money. Then he’ll call Barbara Simpson with threats for more money, or else, and this executive-level babe will break down in tears, begging “IRS security expert” Mark Hardin for help.

It wouldn’t be a Cunningham book if there wasn’t any weird and arbitrary shit in it. For one, Hector seduces a fugly Bainbridge computer worker to get access codes from her, and when she discovers the truth, he stabs her to death….and then decides to make her murder look like a “random” Satanic massacre! Slashing up her corpse and scrawling “Pentagrams and other symbols” on the walls, he hopes he’ll throw off the cops (he doesn’t). And speaking of arbitrary, Computer Kill has Cunningham indulging in his own “arbitrary action scene,” along the lines of the “random bank robbery” series co-writer Mark Roberts gave us in #27: The Animal Game.

While walking around Chicago, Mark is attacked by some random dude who just happens to spot Mark and realizes he’s the very man who killed his brother years ago. Turns out this guy was brothers with one of those corrupt Seattle cops in Cunningham’s #8: Northwest Contract, and, spotting Mark on the streets, rushes to get the revenge he’s wanted for so long. It goes without saying that he fails, and indeed Mark barely breaks a sweat as he takes the guy out, “knife expert” and all.

And really that’s it so far as action goes in Computer Kill, which makes the now-customary “Penetrator’s Combat Catalog” at the back of the book especially ridiculous. Mark doesn’t use any of his weapons; even the finale, which sees him rushing to capture Hector before he can blow up the Bainbridge corporate skyscraper, doesn’t have any action. I mean, at least the similarly-pathetic “main villain” in High Disaster had a few thugs Mark could blow away. Hector Lassiter doesn’t even have that – the one dude he does get to work for him, Hector himself blows away, so as to cover his tracks.

To make matters worse, Mark doesn’t even kill off the increasingly-annoying Hector; the finale sees Hector’s plans to blow up the building with hydrogen fail, but he and Mark inhale copious amounts of the noxious vapors. (Mark later walks it off, given his fine-tuned Indian superpowers or whatnot.) While a brain-fogged Penetrator escapes in an elevator, Hector blows himself up by firing at some compressed hydrogen – and dies off-page! In fact it’s some random character who even informs us that Hector is dead!

And what makes for the final pages of Computer Kill? Mark sitting in Barbara Simpson’s office and helping her recoup, via computer, all the money Hector stole from the company! I wish I was making this up, but I’m not – that’s the climax of the novel, as if we readers were super-concerned that Bainbridge was still out a couple million bucks. I mean throughout the book you keep wondering to yourself, “Why does the Penetrator even give a shit about any of this??”

Thirty volumes in, and this series is in pretty big trouble – ironic, then, that around this time Pinnacle was trying to drum up business with a free pamphlet they were giving out at bookstores around the country (boy I wish I still had mine!). It contained writeups about the various Pinnacle action series: The Executioner, Death Merchant, The Penetrator, Richard Blade, The Destroyer, and Edge (The Butcher was on hiatus at this point). Some of these writeups showed up in the Pinnacle paperbacks of the day; the Death Merchant writeup by Joseph Rosenberger appears in Computer Kill.

And speaking of which, Allan at the Sharp Pencil blog recently sent me the Death Merchant writeup as a Word document, with the intent that I put it up here on the blog – and I’m going to get around to it posthaste.
Posted by Joe Kenney at 6:30 AM

Great review, and thanks for the plug! Although looking back at that, I think I set my personal record for number of typos in a post. I must've typed fast and done no proofreading at all that day, but since it resulted in the image of a quirky British girl with "a double-decker bush," there's no way I'm going back to correct 'em! I swear that was supposed to be "bus" and wasn't a Freudian slip. At least I don't think it was. If it was, though, I stand by it and support any stem-cell research that could make such a thing possible.

This reminds me I haven't read a Penetrator book in a long while. I should remedy that. Even a bad one would be better that the volume of William W. Johnstone's "Ashes" series that I'm stubbornly trying to slog through. Good lord how were there so many of those books? Damn thing's unreadable...

Joe, the "anything-goes" set-up that you describe sounds like the framework of the James Bond movies where 007 has whatever arcane skills the script requires, from piloting a spaceship to hacking a computer system to beating the villain on a 1980s computer game. But back to this double-decker bush . . .

Sounds like it might have been another novel that the author or the publishers re-purposed. Such hijinks make me love this era of publishing so much ...

That's funny, I was about to ask if you ever read a sci-fi thriller novel from 1981 called Compkill, which is NOT by Cunningham (it's by Gary Paulson).