The Penetrator #27: The Animal Game 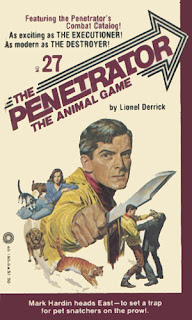 About halfway through this incredibly bizarre volume of The Penetrator, it came to me that perhaps this was author Mark Roberts’s attempt at a Destroyer-esque slice of dark satire. There’s really no other way to explain The Animal Game, which features Mark “The Penetrator” Hardin going up against an animal rights group that steals pets, sells them to research labs, and then turns their carcasses into prepackaged food!

Roberts appears to have read the previous volume, which was courtesy Chet Cunningham, as the prologue makes much reference to it as Mark Hardin hops in his plane and heads to Connecticut for some rest and relaxation. (Or perhaps the prologue was written by series editor Andy Ettinger and not Roberts.) One thing Roberts overlooks though is that, at the end of the previous book, Mark Hardin was about to look into a letter he received from sometimes-girlfriend Joanna Tabler, who was complaining that many of her neighborhood pets were being stolen in New York. Here Mark basically brushes that off as nonsense and decides to focus on himself for a while; in particular he’s about to visit a childhood hero, an older man named Frank Luke who made a string of “Great White Hunter” movies decades ago.

The first indication of the comedy basis of The Animal Game is snuck into a sequence in which we see a variety of people along the East Coast going to the cops to complain about their stolen pets. In one of these quick scenes we see a wealthy man who has gone all the way to Texas to hire a famous private investigator named Leggo who has a mechanical leg. This is without question Roberts’s sly spoofing of real-life private eye J.J. Armes, who was briefly popular at the time (there was even a toy of the guy). Armes was based out of Texas and his schtick was that he had mechanical hands.

Despite the fact that thousands of pets are being stolen, Mark really couldn’t care less, figuring it’s something the local police are better suited to handle. He hobknobs with his childhood hero, Mark posing as an independent conservationalist researching Frank Luke’s massive private zoo, where Luke raises various animals before shipping them off to major zoos. It’s all egregious stuff as we are treated to lots of exposition on the harsh realities of major zoos and how animals are hunted and brutalized and whatnot. Along the way Mark, again posing as a full-fledged Indian, hits on Frank’s Katharine Hepburn-esque granddaughter, Nancy.

There’s no action for the first 40 pages or so. The dark comedy vibe continues when we are treated to more scattershot scenes of various one-off characters dealing with another mysterious menace: the random deaths of old people. In one such scene we read as the cops haul away the corpse of an old woman found slumped on her dining table. The sherrif finds a can of “Senior Singles” on the shelves, prepackaged meals to be eaten hot or cold and expressly marketed to senior citizens. We later learn there is also “Swinging Singles,” sold to the younger, non-married market.

Roberts also pays off on a subplot I was afraid he would forget: the friggin’ ninja hired by Mafia boss Frederico Calucci back in #23: Divine Death. We finally get to see him in action. He’s a young Japanese named Norinaga Tenedo from a powerful clan and he has set up temporary base in Seattle, where Calucci resides. Norinaga’s intro is unintentionally humorous, as Roberts has him attacking a variety of mechanical and cardboard enemies in his training den, and rather than being exciting it comes off like those constant fights Peter Sellers would get in with his manservant/martial arts teacher in the Pink Panther movies. But this could be intentional and just another indication of the purposely-goofy tone of The Animal Game.

Finally Roberts realizes he’s gone too long without an action scene for our hero and shoehorns one in that’s more arbitrary than in his earlier #25: Floating Death, where the Penetrator encountered would-be muggers outside of a Red Lobster restaurant. Mark, driving around Connecticut, randomly stops in a bank to cash some traveler’s checks…just as the place is being robbed! And guess who the three robbers take hostage? The trio take Mark to the countryside to kill him, but, begging for a smoke, Mark instead pulls out his Detonics .45s and blows ‘em away. The scene becomes a sermon on gun rights as Hardin figures less criminals would try such stupid shit if they figured most people were armed…

Mark decides to get involved with the mass pet-napping after all. While still in Connecticut he visits an animal rights center called Animals First run by a heavyset activitst named Horton Ambrose, and Mark’s alarm bells ring. Sure enough we readers soon learn that Ambrose is indeed behind the pet-stealing, carcass-rendering plan, but the unexpected outcome is that many of these murdered animals have carcinogens and whatnot in them, and therefore the various “Singles” meals are contaminated. Thus, old folks are dying at their tables.

Of course none of this has much bearing on reality, but Mark, posing as a health inspector, quickly deduces what’s going on; there is a funny, much elaborated sequence where Mark himself buys a “Swinging Singles” can and Roberts keeps putting it off when Mark is just about to eat a spoonful. This particular comic scene pays off when Mark is sitting watch outside of a rendering factory and notices that it’s the same place that’s listed as the manufacturer on the can of Singles he’s holding! His ensuing strike on the place is fierce, though he mostly just knocks out a few guards.

The two plot threads come together when Calucci’s computer picks up the Penetrator’s prescence in Danbury, Connecticut – thanks to the trademark blue flint arrowheads Mark leaves on his raid on the rendering plant – and thus Norinaga is sent there. Meanwhile we’ve had an overlong sequence where we followed the young Japanese around the midwest and California, snooping out various clues to the Penetrator’s prescence. Things have the potential to get interesting when Norinaga is confronted by David Red Eagle, Mark’s Indian mentor, who has been alerted by the locals of this Japanese dude asking questions not far from the abandoned Borax mine that serves as the Stronghold.

And yet…all Red Eagle does is talk to Norinaga, using like an Indian Mind Trick on him, so that Norinaga spills all he knows, feels dazed after the old man leaves, and then wonders what just happneed! To make it even more convoluted, when Professor Haskins calls Mark and begs him to get back to the Stronghold due to concerns over their security once again being compromised, Mark brushes it off. And when Haskins reveals that Red Eagle won’t divulge everything the ninja told him (!?), Mark still says “Forget about it,” and goes on with his strike against the pet-nappers. But it’s all moot, as Norinaga is sent to Danbury at any rate.

As with some previous installments, the “climactic” shootouts aren’t very thrilling, mostly because it’s Mark going up against a handful of thugs he easily outclasses. This time Mark mostly uses his Sidewinder subgun and a .45, but the gore is downplayed. Also more of the action is focused on Norinaga, who keeps popping up out of the woodwork to attack Mark. This soon becomes annoying because it happens again and again. Mark will be going about his business, the ninja will leap screaming from the shadows, hurling throwing stars, Mark will dodge in the nick of time, shoot at him, and Norinaga will disappear. Again, it’s all like the Pink Panther movies.

Just as the violence is subdued, so too is the sex: Mark manages to score with Nancy Luke, despite the fact that she’s barely in her twenties (Mark we’re informed prefers “older women”), but Roberts fades to black just as the bumpin’ and grindin’ is about to begin. Indeed per the series formula Mark is with Nancy in a beach cottage at novel’s end, reading dossiers on a “defecting” nuclear scientist who was part of some top secret project or somesuch; material for the next volume, of course. But Joanna Tabler, Mark’s girlfriend and who per the previous volume was the one who alerted him to this whole petnapping business in the first place, doesn’t even appear in The Animal Game.

Roberts summarily ties up his divergent plots in the final pages: Norinaga, having returned to Washington under the mistaken impression he’d killed the Penetrator (Mark we learn was merely feigning death with some ancient Indian ritual or something), returns to Connecticut when he suspects his prey might still be alive. The two engage in a furious martial arts fight, Mark using his own ancient “invisibility” tricks to fool the ninja’s eye. He breaks one of Norinaga’s arms and legs, and the beaten ninja pleads to be allowed to commit seppuku. “Sayanora, Tenedo-san,” says Mark, leaving the ninja to gut himself.

From there it’s to a harried blitz on the headquarters of Animals First, where Mark guns down one or two thugs and then gets in a protracted chase to Frank Luke’s private zoo, Horton Ambrose under the impression that Duke was the one who sicced the Penetrator on him. At least the finale is memorable, Ambrose torn to pieces by Duke’s pet lion. Here we finally have some of that old Penetrator gore, with details on his entrails being ripped out and whatnot. And that’s that!

This installment features the debut of the “Combat Catalog,” which features drawings of various weapons and gear from the Penetrator’s arsenal, with notes in triplicate detailing each item. This time we learn about the Penetrator’s airplane, his Jackass combat rig, his Detonics .45, and etc. Unfortunately, Mark’s ever-present dart gun, Ava (which by the way isn’t used this volume), is not shown. Maybe next time, I guess.

Anyway, The Animal Game is the strangest entry in the series yet. Parts of it could’ve almost come from the pen of Joseph Rosenberger, as Roberts will go into extended rants that have nothing to do with anything. Most of the book almost comes off like a diatribe against the prepackaged and fast food industries (toward the end Mark visits a fast food restaurant and Roberts makes it sound like a missing level of Dante’s Hell). But my favorite “WTF?” bit of all is when we are informed that Mark beats Norinaga because Mark Hardin eats red meat! So that’s how you beat a ninja!!
Posted by Joe Kenney at 6:30 AM

I'm guessing the cover painting was commissioned for another book. This guy is older than Hardin and missing the trademark mustache! He looks modeled on Steve Holland.

Marty, surprisingly enough all of the events depicted actually occur in the book...and as for Hardin's moustache, that must've been a point of contention between the two series authors. We're usually informed at the outset whether Hardin has one or not; this time we're told that, while he's shaved off his 'stache, he has let his sideburns grow very thick. I always picture Lee Majors as Mark Hardin, which is pretty easy given that many of Roberts's novels come off like novelizations of TV episodes, with little sex or violence.

Parts of it could’ve almost come from the pen of Joseph Rosenberger, as Roberts will go into extended rants that have nothing to do with anything.

Found a copy of this one today. Looking forward to the out-of-place rants!