Balzan Of The Cat People #3: The Lights Of Zetar 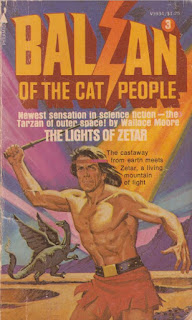 Balzan Of The Cat People #3: The Lights Of Zetar, by Wallace Moore
September, 1975  Pyramid Books

Well friends I hate to break it to you, but this was the last volume of Balzan Of The Cat People. Somehow the “Tarzan of Outer Space” was unable to garner a sufficient readership…no doubt because the previous two exploits were dull, overwritten yawnfests in which Balzan came off like a bufoonish lout prone to random acts of anthropology, and practically everyone he met shamed him for being a violent jerk.

It’s some time after the previous volume, which even Conway must’ve hated because he doesn’t even refer to it this time. In fact, The Lights Of Zetar is more a sequel to the first volume than The Caves Of Madness was, seemingly picking up on the events of that first installment. (And yes it stole its title from an episode of Star Trek!) Balzan often thinks of the Kharnites, the villains of The Blood Stones, pondering how the villains of this volume are “exactly like them.” This actually comes off more like Conway ripping himself off due to his own boredom with the series. But at least Balzan isn’t shamed as much this time around…and, uh, doesn’t knock up a demon-winged chick who lives underground, either.

We meet Balzan as he’s battling a monster. Balzan fights a lot of monsters this time around, usually using his poison-tipped whip (ie his “therb”) or the Kharnite sword he appropriated in the first volume. The Lights Of Zetar has a slightly more pronounced “sci-fantasy” vibe than previous books, with more flying craft and whatnot, but Balzan has yet to get his hands on a raygun or anything. Most of his killing is done by blade, as is his offing of this particular monster which has abruptly attacked Balzan as he was casually walking along and minding his own business.

Unfortunately the beast is owned by the Krells, a despotic race of humans who look just like Balzan save for their jutting foreheads. These are the guys Balzan keeps comparing to the similarly-despotic Karnites in The Blood Stones. (And I will just assume that Marvel Comics writer Conway conflated the names of Marvel alien races the Krees and the Skrulls for “Krells.”)  One of the many goofy things about this series is that the (unnamed?) planet on which it takes place is so massive that entire empires can exist without ever hearing of one another. Thus while the Krells proclaim themselves as the mightiest race on the planet, their name known far and wide, Balzan shrugs and says he’s never heard of them.

He gets in a quick fight, killing off the Krell war party in bloodless prose. Balzan soon finds himself among another race, the Orathians, who also look just like him but with normal foreheads. They are completely subjugated by the Krells, to the extent that the metal staffs the Krells wield don’t even have any power behind them; the Oranthians shrink at the sight of them, believing the staffs are capable of dispensing incredible pain. Balzan saves a group of Oranthians from these Krells, and thus is greeted like a hero when he enters their camp. Here he meets the lovely Tarlene, and “Balzan the Anthropologist” briefly returns as he ponders over the girl’s total mental domination by the Krells.

Meanwhile the two shack up; Conway seems to have understood by now that Balzan’s supposed to get busy with some busty native gals each volume, which I’m sure was a stipulation from book producer Lyle Kenyon Engel. But there’s zero in the way of salacious details. Honestly the series is almost G rated, and the vintage planetary romances it was inspired by were even more risque. Also here Balzan meets Taya, the Chronicler of the Oranthians; he’s old and wizened and a revolutionary at heart, plotting an underground resistance against the Krells.

Conway has this strange tendency early in the book of setting up characters, making them seem important, and then promptly killing them off. This first happens with a much-ballyhooed Krell commander who vows to get this new “Oranthian” (aka Balzan) who’s causing so much trouble; our hero kills this guy so casually that I had to re-read the paragraph to confirm he was dead. The same holds true for the Krell ruler of the Oranthians, who is here due to being married to Lenor, daughter of Amdroth, the king of the Krells. This Oranthian outpost is his “gift” for being married to the princess, and while this initially promises some sort of royal subplot about the Krells, this guy too is perfunctorily killed by Balzan, who decides to just press his advantage and marches right into the local Krell fortress, killing the guy where he stands!

Balzan does a lot of killing this time, and luckily there’s none of the violence-shaming of the previous books. Or at least not so much of it. He is though still a complete moron, and just like last time is twice knocked unconscious, at the mercy of his enemies, within the first forty pages. Here it’s Lenor, who offers Balzan a drink mere moments after he’s killed her husband, and Balzan like a fool drinks it…and passes out. Instead of putting a knife in his throat, Lenor tells some underlings to round him up and put him aboard her ship, which she flies to the main Krell fortress to show off her prisoner to her dad. Balzan wakes up just long enough to get knocked out again.

Amdroth, ruler of the Krells, is gifted with precognition thanks to the strange shining lights of Zetar, the god that lives within the mountains above the fortress. The “Feast of Zetar” is coming up and we learn that people are sacrificed to the god every several years. Balzan’s freed by underground resistance Oranthians led by Jem, who happens to be the brother of Tarlene. Soon Balzan’s with the whole group of them, plotting the takedown of Amdroth. Our hero isn’t all just poisoned therbs and Kharnite swords, though – he’s also pretty handy with a computer, as he quickly discovers the “secret weapon” Taya has discovered beneath the Krell capital. It’s one of those Star Trek computers, too, just a massive construct that’s activated by speech. Here Balzan learns that “Zetar” was actually the name of the planet these ancient aliens came from, millennia ago, leaving behind their technology; technology Amdroth now abuses so as to subjugate the Oranthians.

We do get a little of the courtroom intrigue promised in the opening section, but it concerns Amdroth’s top warrior, Emdor, and some other dude whose name I forgot to note vying for dominance. And also Emdor is sleeping with Lenor, but Conway leaves this too off-page. We do get a lot more action, though, which is nice given the plot-heavy boredom of the previous book. The sci-fantasy sweep continues when Balzan uses that ancient computer to fire a plasma cannon sort of thing, blasting apart a Krell war party. Conway even appropriates a Weird Tales vibe when Amdroth, who is also a necromancer, reanimates some dead Krell warriors to fight Balzan, Jem, and Taya. This sub-Conan vibe continues when Balzan challenges Amdroth but is confronted by a host of visions.

The back cover copy implies that sexy (but big foreheaded?) Lenor will in some way tempt or sway Balzan, but Conway is unwilling to deliver this scene. Balzan sneaks into the palace, comes upon Lenor, and she offers herself to him. Balzan my friends turns her down, sickened by her evilness. After this Lenor falls to her death in the courtyard below…and Balzan questions his manhood for turning her down, blaming himself for her death! Not that this slows him down much. He’s here to kill Amdroth, so ventures into the caves where the evil ruler gets his power.

The beast on the cover is not a true indication of the guardian of the cave in which Zetar “lives.” In the actual novel it’s a massive spider – and humorously it’s dispatched by Balzan in a few sentences. In fact, the novel seems to end thirty pages early. Balzan takes out the monster, confronts Amdroth, and then discovers that Zetar is, “surprisingly,” a computer. Another that the ancient aliens left behind, but it needs energy or something to run, and Amdroth has been using sacrifices to power it. Along with his own body, as he’s gotten into a symbiotic relationship with the computer, which has granted him eternal youth; in reality Amdroth is incredibly ancient.

But once that’s done it seems the novel should end, but instead it’s about Jem and the Oranthians (sounds like an ‘80s cartoon) battling Emor and his still-loyal Krell warriors. In the climax Balzan gets another reminder of “man’s inhumanity to man” when a victorious Jem proves to be more merciless than even the Krells were. Even Tarlene is transformed from meek to bloodthirsty, sitting beside her brother and calling for Krell blood. This sickens Balzan, who loses all feelings for her (perfect so he could hop in the sack with whatever babe he’d meet in the next volume). After a violent disagreement with Jem, Balzan cuts Jem’s arm off(!) and then goes on his merry way.

And that was it for Balzan Of The Cat People. Even though only 140-some pages, The Lights Of Zetar is ponderously slow-going; not as slow as the previous volumes but close. It would seem clear why the series failed to take hold with readers. It’s too bad Manning Lee Stokes didn’t have a go at the series; his offerings would’ve been padded and ponderous as well, but they’d burn with that weird fire so typical of Stokes’s work, particularly in the eight volumes of Richard Blade he wrote for Engel. One can only imagine what sort of weirdness he could’ve brought to this similar series.
Posted by Joe Kenney at 6:30 AM

I’ve been tempted to pick up this series in the past, but you have definitely warned me off.
It’s interesting that Conway used the name Krell here. The Krell were the aliens in Forbidden Planet, and I believe Stan Lee just split the name up into Kree and Skrull. Sounds like Conway either reverse engineered the names back into Krell, or just straight ripped off Forbidden Planet.

I bought this one already but haven't got to it yet. I didn't even realize it was third and last in a series!

I may read it now just to make comparisons to your review...