Balzan Of The Cat People #1: The Blood Stones 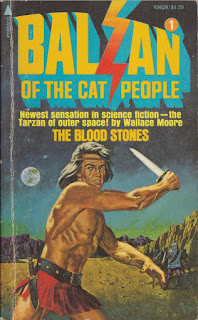 Balzan Of The Cat People #1: The Blood Stones, by Wallace Moore
May, 1975  Pyramid Books

Yet another series produced by book packager Lyle Kenyon Engel, Balzan Of The Cat People is along the same lines of an earlier Engel production, Richard Blade. But whereas that series took inspiration from the Conan stories of Robert E. Howard, Balzan takes its inspiration from Edgar Rice Burroughs, particularly John Carter of Mars and Tarzan (who is even referenced on the cover).

Another difference is that Richard Blade lasted a whole lot longer; Balzan only amounted to three volumes, and whether that was due to the series being a bomb with readers or the fact that Pyramid Books folded in 1976 is unknown. I’m betting it was a combination of the two, because The Blood Stones, the first novel in the series, really doesn’t have much to recommend it. It’s fair for what it is, just an average piece of mid-‘70s sci-fantasy, but it’s nothing remarkable.

According to the internet, “Wallace Moore” was really comics writer Gerry Conway. It was interesting knowing this, as Conway’s tale would be perfectly at home in a Marvel comic of the time. The story is heavily plotted with a lot of melodrama and action but zero sex. Conway wrote mainstream comics and he brings that same sensibility to The Blood Stones, as the novel has none of the softcore nature of the Richard Blade novels. And yet Conway’s writing, due to that too-heavy plotting, is in a way similar to that of Manning Lee Stokes.

Balzan is around 22 years old and is the lone human on an alien planet; in capably-dispensed backstory, we learn he had a Superman-esque origin story. His parents, Doctors Weldon and Katherine Rice, grew frustrated with the short attention spans of the American people of the year 2500; we’re informed this short attention problem began in the 1970s, but by the 26th Century nothing lasts, all is ephemeral, everything is just a flash in the pan. It’s interesting that Conway the optimist gave us a few centuries; rather, a mere 40 years after Balzan was published and we already live in a Twitter/Facebook world of impermanence.

But as their spacecraft neared Mars the couple ran into a black hole or something, zipping through space to a weird new galaxy. The couple died immediately, but their baby, Paul Brian Rice, was still alive in stasis. The ship crashed and the baby was discovered by biped cat people who lived on this part of the strange new world; the cat people were called Endorians, and one of them, Lomar, raised the baby as his own child, naming him Balzan. Lomar raised Balzan alongside his other child, a girl named Kitta; Lomar’s wife died while giving birth to her.

A big failing with The Blood Stones is we don’t really get to understand how Balzan works in this world, which is populated by biped cat people, biped lizard people, and another group of people who apparently are a combination of the two. There’s also mention of winged people, unseen this volume. But Balzan is the only human and his knowledge of earth comes from “The Teacher,” ie the computer in his crashed spacecraft, which has told Balzan all about history and who he is and whatnot. That Balzan, raised on an alien planet, is able to understand the computer’s English is a mystery we shouldn’t try to solve.

What is puzzling though is the question of who Balzan identifies with. He’s been raised by the Endorians but he doesn’t have their subservient nature. He thinks of Lomar as his father and Kitta as his sister, but I ask in all seriousness, has Balzan ever gotten laid? And if so, by what?? This doesn’t really matter in Conway’s PG world; Balzan for what it’s worth is, in the end, exactly like any other generic hero of a sci-fi fantasy, a studly monstrosity of manly muscle, described exactly as he is depicted on the cover painting, with the headband and everything.

At any rate, Balzan is so generic that you have a hard time identifying with him. It makes it worse then that the novel opens with the Endorian community he’s grown up in being destroyed by lizard-like bipeds called Albs; thus, there’s no part where we see how Balzan interracts with his “people.”   Anyway, Balzan’s out hunting with his therb (a whip with a poison barb that causes death in seconds) and comes back in time to find his home destroyed, Lomar dying, and Kitta and several other Endorians captured, taken away by the Albs. Lomar buys the farm and Balzan swears vengeance.

Balzan does what any other revenge-seeker would do: he tracks the captured Endorians to the sprawling city of Kharn, where he first hooks up with a group of thieves and then becomes a gladiator in the Kharnite arena! Seriously, Conway is very similar to Manning Lee Stokes in how he seems to be writing one book before veering course midway through and writing another. (He’s also like Stokes in his blocks and blocks of description; the book runs 190 pages of super-small and dense print.) But what starts out one way gradually turns into another tale entirely.

Armed with his therb and a Kharnite “neutron sword,”Balzan wastes a bunch of Albs on his way to the city of Kharn. While there’s no sex, Conway doesn’t shy from the gore, though again there’s nothing in the book that would’ve been unpublishable in the ‘30s. Balzan eviscerates and decapitates slews of the lizard men, the green gore gushing. He finds himself though overwhelmed by Kharn itself, which is a sprawling kingdom of wretched poverty living beneath untold wealth. He soon meets a young Kharnite (apparently lizard-like people, but not full on lizard men, or something) named Lio.

The middle half of the novel is where all the heavy plotting comes in. We’ve got Balzan trying to push Lio and the theives into full-blown rebellion, we’ve got the plotting and counterplotting of Kharnite notables. Among the latter is the master of the gladiator games, who lusts for wealth; then there’s Lord Sha, who has placed Kitta in his own personal harem (though he doesn’t have sex with her, nor any of the other female creatures in his harem); and finally there are King Dragus and Queen Myrane, rulers of Kharn and the reason for which Balzan’s people have been enslaved – the royal couple put on monthly arena games, and the rabble want to see fresh blood spilled.

Myrane seems to have stepped out of a Richard Blade novel; she’s a raven-haired beauty with an insatiable drive for sex and bloodshed, usually at the same time. She’s also an immortal beauty, ageless, which is another hallmark of that earlier (and superior) series. But when Balzan, captured at this point and training to become a yarrotite (ie gladiator), is taken as expected into the ravenous queen’s presence, he does something Richard Blade would never do: he spurns her advances. (Indeed the closest we get to adult stuff in the novel is a fade-to-black sex scene between Lord Sha and Myrane.)

Through the dense plotting and scene-setting Conway does deliver several fights, usually featuring Balzan taking down hordes of opponents, including one memorable scene where he fights a three-headed creature called a huulat. He’s busting his ass to save Kitta, and unfortunately, when we finally meet the girl, we wonder why the dude even bothers. Kitta as presented is such a cipher, so clueless and, well, stupid, that you have a hard time understanding why Balzan puts himself through the wringer for her. At first I wondered if Conway was developing a romance between the “brother and sister,” but nope – as mentioned, Balzan is as generic as can be. He’s saving Kitta because she must be saved, and that’s that.

Unfortunately we also get many sequences from Kitta’s point of view (Conway is damn excellent in how he never POV-hops…and when he does change perspectives, he actually gives us some white space!), and she does nothing to gain our interest or empathy. She’s eternally confused, frightened, or docile, and the only bright spot comes when she falls into the clutches of two sadistic members of Sha’s harem, each of whom bear her ill will due to jealousy. Kitta’s strapped to a table and tortured, but Conway leaves it all vague; despite which, you still could give a shit about her.

After a fight to the death with yarrotite trainer Kalak, hired by Sha to dispose of Balzan (due to Sha’s jealousy that Queen Myrane has the hots for Balzan), our hero is again summoned to Queen Myrane…and again turns down her sexual advances. (I honestly wanted the book to end with Balzan going back to his crashed spaceship and asking it, “Teacher, am I gay?”) Instead Balzan wants to know about “the blood stones,” which he’s heard vague mention of since this whole business started; they turn out to be ancient stones which, Myrane declares, needs the blood of the pure to keep giving out their power. Through the stones Myrane has gained control of Kharn, as well as another kingdom centuries before.

The finale is appropriately apocalyptic if overlong, with Balzan taking on a hairy demon that lives in the pool of blood in which the blood stones reside and then smashing the stones, which causes the immediate “implosion” of Kharn itself. But despite the chaos and confusion Balzan still finds the time to kill more Kharnite soldiers, another huulat, and even Lord Sha himself. By the time it’s all over you’re ready for a nap. Balzan meanwhile sees Kitta to safety, shakes Lio’s hand, and says “so long;” he’s going on a journey to find out what it means to be a “man.”

Two more volumes were to follow, both apparently also by Conway. I’ve got them both and will read the second one eventually, but long story short, The Blood Stones, while not terrible, is really just standard science-fantasy fare of the era, and the entire thing would’ve been more at home in the pages of Marvel Premiere.
Posted by Joe Kenney at 6:30 AM

Man, I don't know where you find these things, but they're great. You've introduced me to so many good (and bad, and so bad they're good) books that I can't thank you enough.

This sounds like a low-rent version of Leigh Brackett's Eric Jon Stark series.

I always thought Conan the Barbarian kicked off the S&S resurgence, but judging from the publication dates of some of these books, it seems more like a logical apex of that movement. I didn't realize it was so widespread so early: this series, Gor, Dray Prescott, etc predate Conan and even Star Wars by years. I thought the early seventies were all about traumatized vets going medieval on the mafia and/or street scum. Learn something new every day.
Really enjoying the blog.
Live Large

Thanks a lot for the comments!