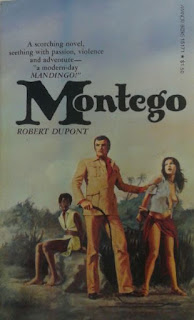 A couple years ago when I was doing some fruitless research on The Marksman and The Sharpshooter, I came across a Catalog Of Copyright Entries from 1975 that listed this book as the pseudonymous work of Russell Smith. I got the book and forgot about it, figuring from the cover it was just a lame slavesploitation deal, only to be reminded of it in Lynn Munroe’s recent Peter McCurtin checklist.

As Lynn notes, Montego is actually more of a Man From U.N.C.L.E. sort of deal, but more goofy and zany. (Actually that would sum up many episodes from the show’s third season.) Russell Smith as ever is on his own wavelength, writing like no one else I can think of, though a vague comparison might be Dean Ballenger mixed with Joseph Rosenberger. But Smith is his own thing, and it’s a weird thing, and it’s typical of his work that you can read up to page 100 and still not know what exactly the book’s about or where exactly it’s going.

Anyway Montego tells the lurid tale of a “smuggler” named Charles Grimes who is in fact a slave trader. Running a small operation that employs contract sort of employees around the globe, Grimes specializes in abducting runaways, the poor, the wayward, or the lost, and selling them to various persons or organizations. Grimes lives in total secrecy with only two people at his constant side: Jakowleff, formerly of the French Foreign Legion and now Grimes’s bodyguard, and Ming-lan, Grimes’s sexy Chinese mistress, who usually traipses around Grimes’s quarters in St. Thomas in the nude due to the heat.

On Grimes’s trail are the operatives of SMEET, a top-secret spy organization (we’re never informed what the acroynm stands for) that focuses on international slavery. Working this assignment is martial arts wizard Wangti, an obese fifty-year-old who is described so much like Sammo Hung that you can’t help but picture him; an American named G. Bayer who himself is a “trifle overweight,” and who “causes more headaches than aspirin can cure;” and finally a junior SMEET agent named Ching-sha, aka Melody, an “attractive Oriental girl.”

So as you can see, Smith has this weird “triplets” theme working here, with sexy Chinese gals repeated on both teams. And there’s more replication, with Ming-lan and Jakowleff having an affair behind Grimes’s back and Melody and Bayer falling in love while keeping their romance a secret from Wangti. Why exactly Smith has even come up with this theme is a mystery, as he doesn’t do much with it, and indeed it serves for a lot of reader confusion. As ever Smith jumps scenes and perspectives usually without giving the reader any white space, so there are parts where we’re reading about the SMEET gang and then suddenly it jumps over to Grimes’s gang, and you’re confused.

Wangti is in charge of the SMEET team and they’ve come onto Grimes’s tail due to a 707 cargo plane that’s gone missing. Turns out it held a few hundred Chinese corpses, men Grimes kidnapped and attempted to sell, but who were all killed by an accidental overdose. Now it’s chalked up as a loss, though Grimes when we meet him is attempting to collect at least some sort of payment, chopping off the thumbs of each corpse as proof that he held up his end of the bargain! But Melody, in the SMEET offices in Paris, has gotten wind of the plot, and now she, Bayer, and Wangti head to the Caribbean to track down various leads.

From here it’s a slow-moving exercise in info-dumping about slave trade operations, banal dialog between the SMEET team or the Grimes team, or brief “action” scenes that are as clunky as those Smith wrote in his Marksman books. Only, none of these characters have the memorable charm of Magellan, let alone the memorable sadism. Wangti is a kung-fu badass but is more content to bully Melody for not being aware at all times. (That said, he does rip a dude’s nose off.) And Bayer really doesn’t make much of an impression, though he does use the same gun Smith gave his version of Magellan, a Browning 9mm Parabellum. Oh yeah, and Wangti is given to wearing false moustaches.

Speaking of Magellan, the first half of Montego takes place in the Caribbean isle of St. Thomas, which Magellan visited in the Smith-penned Marksman installments #3: Kill Them All and #5: Headhunter. Grimes has one of his bases here, and uses the locals to get wind of the three “FBI agents” who have come here snooping around. Grimes and Wangti become aware of various people tailing them, which leads to brief action scenes, such as when Bayer corners one tail as he’s boarding a plane and beats him senseless with the silenced barrel of his gun.

Another callback to Magellan is the SMEET team’s penchant for capturing people, tying them up, stripping them, and then drugging them. This is done to Ming-lan and two of Grimes’s American agents. Most focus is placed on the torture of Ming-lan, whom Melody finds snooping in her hotel room. Subjecting the nude girl to “itching powder,” Melody quickly reduces her to misery. Placing it first on her bare feet and then on her “almost hairless crotch,” Melody watches happily as Ming-lan suffers. (“The fire inside her vagina was unbearable!”) Unlike the Marksman books, though, our heroes are more merciful, though Bayer does murder the two American agents off-page and leaves their corpses sitting in the hotel bathroom, a la Magellan.

But Montego really tries the reader’s patience. The entire novel is basically comprised of the three SMEET members going around St. Thomas while the Grimes team watches them, with long exposition between each team recapping who they have seen and wondering who they are – the SMEET team wondering if “the Spanish-looking man” they’ve seen in a club might be connected with the 707 disappearance, and meanwhile Grimes’s team wondering if the “two men and the oriental girl” might be FBI agents or something. I mean it goes on and on! And what makes it all the more frustrating is there’s only like ten characters in the entire novel!

Smith can’t even give us a finale that takes place on the titular Montego, a sparse no-man’s-land island near St. Thomas which Grimes owns. The SMEET gang is all set to go there, thanks to Ming-lan spilling the beans after her itching torture…but then an FBI team closes in on them. The “climax” my friends is Wangti explaining their mission to the FBI agents…and then turning the case over to them!! Even Bayer is like, “You mean we aren’t even going to go on the raid with them?” And Wangti is like “Nope!” I couldn’t believe it as I read it, my friends. After hundreds of pages of stalling, Smith clearly hit his word count and said to hell with it.

At the very least he does have Grimes captured, courtesy Ming-lan; the very last page has Wangti heading out to his car, only to find a bound Grimes and Jakowleff sitting in it, apparently captured and delivered by Ming-lan, who also sits in the car and tells Wangti she is a “present” for him, or something. Wangti grunts and gets in another car and drives off – the end! Whether Montego was intended as the start of a series is unknown, but it’s so middling and pathetic that you can only be glad it wasn’t. I feel as if parts of my soul have been chipped away from the reading of this book.

Smith’s writing is as indecipherable as ever. I used to think his bizarre style in the Marksman books was due to lazy editing from series edior Peter McCurtin, but Montego is just as screwed-up in the narrative department, despite having a different publisher. Just check out some of these humdingers:

Considering the immensity of Grimes’ criminal enterprises and contrasting it with the few individuals governing and administering; and keeping in mind the staggering profits earned, its continuously functioning successfully was a bitter pill for the agents of SMEET to admit even existed much less swallow… -- pg. 48

She was referring to the man who had rushed up to the Chinese Ming-lan in the Castle lobby and Bayer’s noting the similarity between him and the man he shot on the road. -- pg. 176

Had Wangti been wearing a hat it would have blown off when he next listened to an eager Talus beeping out a latitudinal/longitudinal perimeter fix on a powerful transmitter he had accidentally made signal contact with only an hour before Wangti’s “SMEET” signal from the airport tower shot into his earphones back in Montmarte. -- pg. 206

I know that Smith and many of these guys were just contract writers, looking to make a buck, with little emotional investment in their work. And I’m fine with that. But still, I like to think there’s at least some creative impetus in their novels, some perhaps even subconscious yearning for self-expression. And yet I can find nothing to justify this in Montego. The novel is listless, bland, and merely just exists. Why Smith even wrote it will be a mystery, and I’m certain he didn’t rake in the cash from it (Manor supposedly was notorious for not paying its authors).

Ultimately, if the author so clearly doesn’t give a damn, then how can the reader be expected to? Despite too-brief flashes of Smith’s patented bizarre charm, Montego is otherwise a nonentity, and I’d say it has fittingly been consigned to obscurity.
Posted by Joe Kenney at 6:30 AM