The Butcher #2: Come Watch Him Die 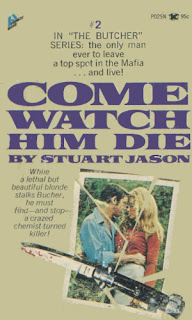 Despite featuring a plot that’s almost a direct lift of the first volume, this second installment of The Butcher is a ton of lurid fun, and my favorite volume yet. Author James “Stuart Jason” Dockery is clearly having a blast writing his darkly comic take on men’s adventure fiction, with his stoic, “granite faced” hero taking on legions of deformed Syndicate freaks in his quest to uncover a convoluted plot that threatens America.

Sticking to the formula he originated with Kill Quick Or Die, Dockery has “Butcher” Bucher immediately gunning down a pair of depraved Syndicate gunmen who have come to collect the bounty on his head. The only change here is that these freaks have been put on Bucher’s trail by Bucher himself. White Hat, Bucher’s ultra-secret spy organization, has gotten wind of a Syndicate-backed plot to replace US senators and politicians with exact duplicates; the plot was only uncovered because the wife of one such senator realized she was sleeping with a duplicate, given that the man in her bed, despite looking and acting just like her husband, was not circumcized.

Through the usual convolutions it’s come down that various Syndicate freaks from Bucher’s past are somehow involved with this plot. Thus to get to them Bucher has put himself out as bait; the inevitable “gunfight” goes down in a grungy bar, where Bucher as ever easily kills both gunmen with his super-fast draw technique. Dockery gives us the first taste of his patented dark, surreal humor here, with Bucher taunting the two thugs with either signing statements that they’ve committed gruesome murders or signing their cadavers over to science. Per series mandate one of the gunmen shits his pants before the bullets fly.

This one doesn’t have the other formula mainstay of the damsel in distress, but there is a lovely lady on the premises: a brunette bombshell named Gloria Dawn who has the unfortunate fate of being a hooker who can’t orgasm. Due to various “subconscious inhibitions,” per her psychiatrist, Gloria can’t climax, though she’s tried and tried…until she gets one look at Bucher! Indeed she orgasms when our hero blows away the goons…and soon becomes obsessed with finding him and taking him to bed.

Sprung from jail thanks to that other series mainstay – the politician called in by White Hat to get the charges against Bucher dropped – the Butcher heads to New Orleans, where he gets info from an albino dwarf named Pearly Q, an old associate of Bucher’s, and surprisingly enough one he actually likes. First though Bucher has to handle another formula mandate – he has to beat some musclebound oaf to burger. This is The Bull Bassoon, a river rat ruffian who works as Pearly’s bodyguard. In an unexpected moment Bucher feels sorry for the dude after he’s pulverized him, and treats him like best buds!

Bucher has some unexpected depth in Come Watch Him Die. He’s still a stone cold badass, practically God with a gun, but later on he even feels bad for poor ol’ Gloria Dawn when she tracks Bucher down to the New Orleans airport, relays her miserable story, and pleads with him to fuck her. But Bucher is as ever all business; from Pearly he’s found out that the latest professional assassin the Syndicate has hired to kill him, a woman, makes her hits with a lipstick tube that hides a spike. This she jams into a man’s spine. Now Bucher is on the lookout, even more than normal, and can’t be bothered with Gloria’s pleas.

From Pearly Bucher has also learned that an ex-Nazi named Klaus von Rimer might have something to do with the duplicate plot; Klaus once worked for the Syndicate under a different name and as well-paid for his photographic memory. But he disappeared five years ago, and Pearly says that an old biochemist in Holland named Zandvoort might provide a lead on where he is. So off Bucher goes to the Netherlands, where kindly old Zandvoort relays his sad story of being forced to work at the Dachau camp. But when Bucher mentions Rimmer’s name, the old man goes into a dead faint.

Thanks to Zandvoort’s busty blonde daughter Erika, Bucher learns all there is to know about Rimmer. The dude was born in 1930 to Himmler’s “retarded sister” and was regaled by Hitler as a super-child, given his photographic memory. But when the Nazi docs noted that the young boy was sexually excited by snakes, they shunted him off into the background, eventually sending him to Dachau when he was a young boy to study biochemistry with Zandvoort. Erika meanwhile is getting a case of the burnin’ yearnin’s for Bucher, and vice versa, despite himself – though when they’re about to do it, he breaks it off, suspecting even she might be the mysterious Syndicate hitwoman.

After lots of laughter at this, Erika succeeds in bedding Bucher, but it’s a straight-to-black sort of thing, same as in the third volume, with zilch in the way of sleazy detail. Dockery’s reticence to get down and dirty with the sexual shenanigans is plumb confusing, particularly given how outrageously lurid he is with the various Syndicate stooges, most of whom are pedophile rapist-murderers with graphically-rendered backstories. But then, Dockery seems unable to even write the word “fuck,” as later Bucher says the word to Gloria Dawn, who has chased him all the way to Holland in hopes for sex, and Dockery must use the most allusive language to tell us what Bucher has said to her.

Erika, blissfully content from major whopping orgasms courtesy Bucher, suffers the exact fate you’d expect. While confessing her love to him the next day as they drive back to her house, her face is blown off by a Syndicate drive-by shooting. Dockery goes into full-bore description of the gore, which nevertheless only adds to the dark humor. Meanwhile Bucher’s discovered, thanks to a colleague of Erika’s, that von Rimer is even sicker than he imagined; back in Dachau the sadist studied cannibalism as a means to feed the starving German army, even coming up with recipes for human meat! In addition von Rimer is a necrophiliac. All this is enough to almost make Bucher puke.

From there it’s to Bucher’s old stomping grounds of Chicago (which of course brings to mind Sand), where he hunts down west coast Syndicate boss Luigi Lupini, a man who made millions from the Syndicate thanks to an industrial-sized garbage disposal built overtop a sewer line in his haberdashery. With a flick of a button Luigi turns men into mush which is flushed down into the sewers. As ever Dockery populates his version of the Syndicate with subhuman freaks who have mind-boggling perversions, even the most minor of torpedoes:

Blow-John Dork and Snyder Key; two of Lupini’s best. Blow-John made his hits with a blowtorch when practicable; said he liked to hear the scream because it shushed a funny noise inside his head. Snyder Key preferred a carpenter’s ordinary brace and wood bit to bore angled holes in the helplessly bound mark’s skull, pack the holes with cotton soaked in cigarette lighter fluid and fire up, listening to the hillbilly music of Lester Flatt and Earl Scruggs and masturbating till the mark’s brains boiled and popped his skull. He defended his artistry with stubborn gusto. “Duh – g-g-gettin’ yer r-r-rocks like th-that is better’n So-Sophia Lo-Lo-Loren, he! he!” Snyder had stuttered since early childhood.

As typical the duplicates plot gradually fizzles out – turns out it’s a long con by von Rimer, who is merely swindling the Syndicate into believing he’s duplicating people, whereas he just drugged the senator’s young wife into believing her husband had been circumcized. Dockery puts more focus on the female assassin trailing Bucher. Gloria Dawn has been following “Butchy” around the globe, hoping for sex, with a “svelte beauty” in tow named Sandra Davis. Claiming to be a reporter for a women’s magazine, Sandra is all too eager to profile Bucher for a feature story. A mere call to White Hat and Bucher determines her story is a lie and knows he’s found his would-be assassin.

Making the ladies believe he’s about to engage them in a three-way, Bucher instead gets Gloria pass-out drunk and then ties up Sandra. Turns out she was raped repeatedly as a teenager by her stepfather and stepbrothers (not to mention their German Shepard!), and now she hates men and the thought of them makes her sick. Bucher, playing on this fear, makes her think he’s going to have sex with her – unless she talks. Meanwhile Bucher is disgusted by her and believes he would be physically incapable of screwing a “murderess,” no matter how beautiful. Sandra blabs that von Rimer is in an old monastery in Mexico, where he’s perfecting some drug to wipe out the US.

The finale is especially crazed. Von Rimer is beyond outrageous – a cannibalistic, necrophiliac ex-Nazi with delusions of world conquest who has used chemistry to grow a pair of 60-foot pet anacondas! Meanwhile Bucher finally gives in to Gloria Dawn’s pleas for sex – through the usual convolutions, she’s down here in Mexico too, brought to von Rimer’s converted monastery for no reason at all by Sandra Davis (whom Bucher thought he’d left for White Hat to arrest). As usual Dockery provides zero sexual shenanigans, with the chapter ending immediately as the two are about to hop in bed, and the next chapter opening “exactly four hours later” with a satisfied Gloria passed out on Bucher’s bed.

In the final pages we have Sandra raped in punishment by a pair of drugged von Rimer minions, one of whom strangles her to death – and later von Rimer pulls her corpse behind some crates and rapes it(!). Meanwhile Bucher for once has been caught, naked and unarmed in a cage, about to become food for one of the giant anacondas. But one of the standards of this series is that Bucher is always prepared, so he has a key hidden in his hair and is able to free himself. One of the anacondas has eaten a heifer while Bucher watched in disbelief; who will be surprised when von Rimer gets his just desserts when he races into the snake pen while trying to escape Bucher, forgetting there’s a hungry giant anaconda in there?

A bit overlong, sometimes a bit too close to the line of parody, Come Watch Him Die is nevertheless another fun, blackly humorous installment of The Butcher. It’s as clear as ever that James Dockery does not take his story seriously, and hopes that the reader doesn’t, either, but as mentioned the characters take it all seriously, and therein lies the rub. Otherwise The Butcher would descend into satire along the lines of The Destroyer.

Here’s the last paragraph of the book:

He reached his garments and dressed slowly, a black depression settling heavy over him. After he finished dressing he made his way across the basement and wearily climbed the stairs, the bitter-sour taste of defeat strong as biting gall beneath his tongue.

Next time I’ll jump ahead and check out a later entry in the series, one courtesy author Michael Avallone.
Posted by Joe Kenney at 6:30 AM

Right, the one with the anaconda. Is this even possible outside an Aragones cartoon? Who cares? The Butcher often borders on self parody, but somehow Dockery always managed to sidestep this. Even if he basically wrote the same story again and again and even used the same parting words. (Which really seemed to be something of a calling card for this series.) Names of heroes are important, and you can't get much better then Bucher the Butcher.