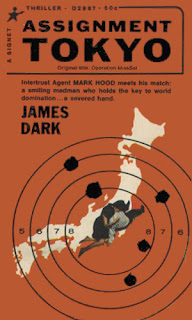 The fourth volume of Mark Hood is, unfortunately, a bit tepid, J.E. “James Dark” McDowell page-filling with abandon in order to meet his word count (and this one appears to be a little longer than previous volumes, which makes the padding all the more obvious). I’d planned to read through the series quickly, but this one, sad to say, was so disappointing that I’ve decided to take a break from it for a while.

It’s six weeks after the previous volume and Mark Hood is back in his home base of Geneva, where he’s itching for some action. Here he trains with his karate sensei, Murimoto, who we learn is not aware that his pupil is a spy; Murimoto in fact wonders why Hood trains so vigorously in the martial arts. He also wishes Hood would compete in the upcoming Meijin Exhibition in Tokyo, as Murimoto feels that Hood is one of the better practioners of karate.

And who will be surprised when the call finally comes in and Hood’s next mission sends him to...Tokyo? Dark inserts a bit more comedy in the series with this volume, mostly via Hood’s inane banter, particularly when it comes to his partner Tremayne (returning from the previous volume) and Michelle, pretty French secretary of Hood’s Intertrust boss, Fortescue. In Michelle’s first appearance in the series we see that she has long been a recipient of Hood’s shameless advances, though she capably puts him down again and again.

Also as mentioned, Hood and Tremayne here have been refashioned into a buddy-cop duo along the lines of Razoni & Jackson, bickering and bantering from first page to last. This is quite different from their relationship as depicted in the previous book, where they were all business. But here Tremayne makes most of the wise-cracks and Hood acts as the straight man; many of Tremayne’s jokes are at the expense of Hood’s would-be womanizing and whatnot. It’s all entertaining but unfortunately not too funny, at least when compared to the stuff in the Razoni & Jackson books.

Fortescue’s briefing has it that someone has apparently tried to infiltrate the remote Japanese island Oba, which houses the control unit for a US missile satellite weapon called the “MissSat.” Sounding like the ‘80s star wars concept a few decades early, the weapon holds a salvo of atomic warheads which can be fired down at the earth by the press of a button. Oba island is well-defended, including concentric rings of electrofied wiring or something in the ocean around it; locals are clearly warned to stay away. Yet three men in scuba gear just tried to penetrate the defenses, dying in the attempt. Hood and Tremayne are to go to Tokyo to find out why.

Hood attemps more failed womanizing when he promptly begins hitting on pretty Gwen Tremayne, secretary for US ambassador Tomlinson in Tokyo. Hood intends to hold up his cover as a wealthy jetsetter known for hitting and quitting women around the world; here in Tokyo he’s posing as, you guessed it, a last-second contender in the Meijin Exhibition. Be prepared for a ton of expository karate material in Assignment Tokyo, much of it clearly shoehorned in to meet the word count. Parts of the book are almost like a dry treatise on the martial arts.

Much of it comes from Hiroshi Sato, a Japanese man Hood just happens to meet at dinner his first night in Tokyo – coincidental as hell when we learn that Sato will be Hood’s first opponent in the exhibition. Sato is a wise type, very formal and friendly, with good English and a love for the martial history of Japan. Hood likes and trusts him instantly, feeling he’s found a kindred soul; pity then that the back cover copy completely ruins the surprise reveal that Sato is indeed the villain of the piece!

Also here at dinner Hood meets the busty and beautiful Toi Smith, a half-Japanese, half-American beauty who shows off her incredible bod via revealing clothing. She’s a reporter for Modern Living and hopes to interview Hood; he meanwhile can’t stop staring at her breastesses, much to Gwen Tremayne’s dismay. But Hood has to hurry home and sleep so he can get up super-early and train for his bout with Sato, which is to be held that very afternoon. Tremayne, posing as Hood’s trainer, contributes nothing but more banter given his dearth of karate knowledge.

The Hood-Sato bout is good but again kind of boring as I’ve never felt martial arts fights translate well into print. At any rate Hood gives Sato a great run for his money but ends up being defeated by the Japanese master. Sato, as gracious as ever, offers to send “the top masseuse in Japan” over to Hood’s apartment to repair Hood’s battered body – and surprisingly enough, it turns out to be Toi Smith, again dressed provocatively despite the frosty, disinterested treatment she gives Hood.

And also despite this frosty treatment, Toi herself gets excited at Hood’s own excitement – naked and being massaged, he can’t help but gawk at those awesome boobs of hers and the natural reaction ensues. They end up having sex on the table, the first Hood’s scored since the first volume, but again James Dark provides zilch in the way of details. About the most we get is a little lyrical stuff, but it’s all pretty vague. From here it’s on to a snoozer of a sequence where Hood goes to Sato’s for dinner and we must endure more martial arts talk and also demonstrations from Sato’s “cult” of modern samurai.

Toi is also here, and Hood suspects that she’s secretly Sato’s kept woman; she maintains the frosty nature of before, despite their afternoon banging. Around page 70 Hood finally begins to suspect Sato might be evil. Also at this dinner Toi mentions she’s secretly been lobster diving around Oba; when Hood gets interested, masking his professional interest as concern for her safety, she brushes it all off as a joke. Meanwhile the next morning another dude attempts to infiltrate the island, this time getting all the way onto shore before being gunned down.

Eventually we will learn that Toi really did find a way to get near Oba – plastic cylinders and valves on her scuba gear, which aren’t affected by the underwater elecricity barriers. Also Toi has apparently been taken captive by Sato, who is now fully outed as the villain. His goal is similar to that in the Killmaster novel The Samurai Kill: he seeks to remilitarize Japan and bring back the old samurai spirit. Hood and Tremayne stage a rescue of Toi, but they’re quickly caught by Kosima, the fastest-moving of Sato’s men; all of Sato’s warriors are almost supernaturally skilled in the martial arts.

After freeing themselves and taking out Kosima, our heroes go after Sato, who has donned plastic fittings on his scuba gear and successfully taken over Oba, even killing off all of the soldiers there with poison gas. Dark finally delivers a bit of action as Hood and Tremayne get on the island, using Toi’s plastic scuba gear, and appropriate a few submachine guns. He isn’t very colorful with the gore, though, but there is a nice part where Hood flat-out murders Sato’s men as they sit enjoying a victorious meal of sashimi. Hood guns them down with a subgun and then later even brings out Sato to happily show him their corpses!

As expected, Assignment Tokyo culminates with a fight to the death between Hood and Sato, the latter defending himself with the stock of an empty carbine while the latter comes at him with a samurai sword. Sato, too superhuman to be defeated, takes off after realizing his cause has been lost – Hood deactivates the MissSat control at the last moment – and commits seppuku by swimming into the underwater defenses beneath Oba island without his plastic scuba gear!

But as mentioned, Assignment Tokyo is just too damn slow-moving to be much fun. Too much of it is mired in inconsequential karate info, and the narrative just plods along. It doesn’t even really pick up until page 110 or so, and as usual we’re talking very small print here. So, long story short, I think I’ll give the Mark Hood series a break for a while; this one kind of wore me out.
Posted by Joe Kenney at 6:30 AM

There was one worse, though I don't remember the title. Hood is supposed to meet a Chinese, I believe, but there is a hurricane, and the story drags throughout, with little happening but the hurricane. The best part of the series, they were fast reads. A lot of similarities to Johnny Fedora novels, though Fedora was better most times.

Thanks for the comment, Tom. I think that was actually volume #3, Hong Kong Incident.