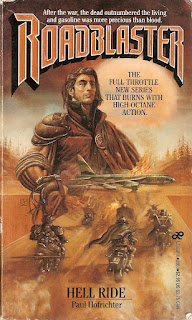 Graced with a misleading cover that makes it look like some sort of futuristic cowboy-biker sort of deal, Hell Ride, the first volume of the Roadblaster series, is in fact a post-nuke pulp. The series ran for three volumes and had absolutely no relation to the cover painting – the “hero” of the tale, Nick Stack, could more accurately be depicted as a potbellied simp in a wifebeater shirt.

Roadblaster was packaged almost identically to another Leisure Books post-nuke series, the longer-running and infinitely superior Phoenix. Almost the same color scheme/hyperbolic cover copy was used for both, but whereas Phoenix fired on all cylinders, Roadblaster is more of a middling affair, boring and padded, and indeed calls to mind the sort of books Leisure/Belmont Tower was publishing back in the 1970s, with the same sort of endearingly amateurish prose you’d find in say The Marksman or The Sharpshooter.

No surprise then that author Paul Hofrichter got his start writing for those very books. I must offer Lynn Munroe a huge debt of gratitude for his recent Peter McCurtin Checklist, where in the Assassin/Marksman/Sharpshooter section he detailed who exactly wrote each volume of those series. Lynn has revealed that it was Paul Hofrichter who wrote the atrocious Sharpshooter #9: Stiletto, one of the worst novels I’ve had the displeasure of reading since I started this blog…a novel in which characters aimlessly drove around and engaged in mundane conversations before hastily-sketched firefights would break out.

Sadly, over ten years after writing Stiletto Hofrichter still hadn’t much improved. I mean don’t get me wrong, I’m not one of those internet reviewers who constantly bitches about these genre books being “bad.” In fact the goofier they are the more I love them. But friends, Hell Ride should come with a pack of no-doze. It’s a soul-crusher of a read at times…I mean, nuclear war breaks out but characters just aimlessly drift around the mountains of central California and engange in mundane conversations. And in another callback to Stiletto, one of the main topics of conversation is the inflated price of gasoline.  Perhaps this is something Hofrichter himself obsessed over in the real world.

Anyway, another interesting similarity to Phoenix is how the opening of Hell Ride so closely mirrors Dark Messiah. Just like Magnus Trench, series protagonist Nick Stack is enjoying some hunting in the mountains of California when nuclear war breaks out. And just like Trench, Stack has a wife and kids back home in New York City; Stack’s 36 and owns a “radio dispatch private cab service.” Unlike Magnus Trench, though, Stack doesn’t seem to be in too much of a hurry to get back to New York and save his family. Rather, the nukes hit and Stack just sort of takes his good ol’ time getting to his van and leisurely heads on back to civilization.

Driving to the small town of Montieth Stack promptly comes across a teenaged runaway named Rayisa Gilchrist. Apparently recalling to mind his daughter, Stack offers the naïve young girl a lift into town. The two engage in some of the most humdrum, mundane, expository dialog this side of William W. Johnstone. Remember, nuclear war just occurred. More banality ensues as Stack gets in an argument with an old coot who runs a gas station and demands inflated prices. “Not all mountain people are bad,” Rayisa reminds Stack, who agrees. Remember, nuclear war just occurred.

In Montieth Stack and Rayisa hobknob with the locals, and Stack has a few beers…! His family apparently forgotten, he decides to head to the biggest nearby city, Fresno, to assess the damage. Rayisa happens to be from there and tags along to see if her family is dead. They pick up more people – a family who has somehow escaped the mass nuclear destruction – but they find Fresno bombed to rubble. Stack hooks up with an army lieutenant in charge of rescue operations and offers some half-assed help, but mostly just ends up puking his guts out after eating radiation-poisoned seagulls he shoots down with his Savage 99F hunting rifle.

Stack busy puking, the narrative cuts over to a seemingly-arbitrary setpiece which concerns a B-52 bomber making an aborted run on China in retaliation for the nuke strike on America. But engine problems force them to turn back around to their air base, which has been destroyed in the interim. They end up landing in the middle of nowhere…not far from Montieth. In another extended setpiece, we cut over to another new group of characters: the Santa Monica Bloodsuckers, a 50-member biker gang led by Lyle Rokmer, aka San Quentin Sal.

The bikers decide that chaos now reigns and decide to rip some shit up. Here, after so much deadening banality, Hofrichter displays his true gifts: sleazy sadism. Apparently the number one thing to do if you’re a bad guy in the post-nuke world is to force preteen girls to give you blowjobs. This Rokmer and gang proceed to do posthaste – that is, after they’ve stolen gas from the mean old coot Stack ran into. The bikers strap the old man up to his gas tanks and set him on fire; Hofrichter spends four pages on the sequence, dwelling on the terror and mutilation and destruction of the old coot.

It gets crazier and crazier, too, with the bikers getting pissed with the girl, and when she can’t take anymore and pukes(!) they slap her around and drag her off for more fun later. Meanwhile a few one-off characters, Vista Royale residents, band together to fight off the bikers. It goes on and on, not thrilling in the least, and ends with the expected outcome of the bikers victorious. But what of Stack? Once he’s done puking seagull meat he takes his leave of Fresno, and I kid you not his parting words to his new lieutenant buddy are, “This has been a unique and interesting experience.” That’s how I’d sum up my time in a nuke-ravaged city.

Stack further displays his half-assery when he gets back to Montieth and the sheriff, who is putting together a group of men to go save nearby Vista Royale, asks Stack if he’d like to join. Stack’s response, my friends, is “No thanks.” This is the only instance I can think of in the entire universe of men’s adventure fiction where the “hero” says “no thanks” to saving a bunch of people. The sheriff’s force is decimated in another overlong/underthrilling sequence, but when a biker scouting party arbitrarily snatches young Rayisa, Stack finally decides to get involved.

Now, does Stack sneak up on the otherwise-distracted biker and slit his throat? No sir. He takes him out in what must be admitted is a “unique and interesting” method of dispatching someone:

Stack watched [Rayisa’s] mouth glide along the swollen shaft of the biker whose pants were now down around his knees. The biker’s head was back and his eyes were shut tight. The goon was in heaven. His hisses filled the air.

Stack grew very cold now. He aimed the rifle at the base of the thick shaft. Then, as Rayisa pulled back, letting the hoodlum out of her mouth, almost to the tip of the cobra-hood head, Stack fired. The sound of the shot reverberated in the hallway as the goon’s shaft disintigrated into strips of bloodied meat and hundreds of flying droplets of blood. Rayisa screamed as she drew back, the stub of his now-destroyed manhood falling from her mouth, while blood jerked from the crotch of the screaming hoodlum, who was quickly going to his knees.

This is clearly not the best way to save a traumatized young girl, and it’s to Hofrichter’s credit that he has Rayisa appropriately dazed for the rest of the novel, even getting doctor treatment once Stack has safely gotten her back to Montieth. But remember, Rayisa, “not all mountain people are bad!” Oh and meanwhile Stack saves someone else – none other than a member of that B-52 crew, who stumbled upon the bikers while looking for help. Now there’s more than just the fate of Vista Royale at stake; if the bikers get to that B-52, which is loaded with primed nukes, there could be even more nuclear misery on the way.

With the assistance of a gang of good bikers who just happen to show up (members of the Harley Davidson Family Club or somesuch), Stack and more Montieth locals get in an extended battle for the B-52. This isn’t a bad sequence, with lots of flying blood and gore and bikers getting run over by cars. Meanwhile, biker leader Lyle Rokmer escapes. From there it’s back to Vista Royale, which Stack et al eventually liberate in another long action setpiece, one in which Stack even blows away a few female bikers (for which he feels the need to lamely explain to his comrades that they were armed).

Hofrichter ends Hell Ride on a cliffhanger: both Rokmer and his second-in-command, Lance Zoyas (aka Samurai Sal), get away, each of them vowing revenge. And meanwhile poor Rayisa lies in a friend’s bed and ruminates over how some dude’s cock was blown out of her mouth while she was blowing him…

Yes, this is a strange, sometimes-unsettling book, my friends. I suspect the title of the novel has more to do with the reading experience itself rather than the actual content. The crazy parts are crazy and the goofy writing is just the icing on the cake (John Tigges is another point of comparison), but overall the mundane parts are just too hard-going. That being said, here are two more reviews of Hell Ride I hope you will enjoy: a typically-great and concise one by Zwolf, and a hilarious one at the awesomely-named Paperback Warrior blog.
Posted by Joe Kenney at 6:30 AM

It looks like a novel written by Jess Franco.

I wonder if the later volumes became anything like the cover copy or not. Guess I'll have to read them to find out... but, I'm kinda dreadin' that. I'm still building up a massive review post for sometime in the future... got about a dozen already but I keep stubbornly thinking it might be fun to double that... :)

Seems to be a revival of this type of fiction. I just picked up a client who wants me to a series of three. Must have something to do with the times and manners.

Johnny -- so weird, I was just listening to the Vampyros Lesbos soundtrack for the first time in several years the other day!

Zwolf -- I've got the other two volumes also, and I'm in no rush to read them! And it goes without saying that I eagerly await your next review roundup!

Tim -- That's cool to hear, and keep us informed on what you write...just don't use the Roadblaster series as your post-nuke pulp inspiration!!

Both bikers have a “Sal” nickname! I wonder if every Santa Monica Bloodsuckers member does.

This guy says this book is the worst book ever written. (I hope to find a copy soon!)