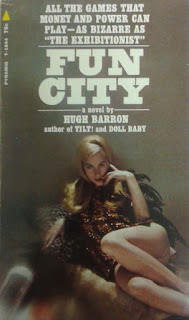 Burt Hirschfeld poses as “Hugh Barron” in another of his paperback originals for Pyramid Books; this one, while not perfect, might be my favorite Barron yet. I was in the mood for a piece of trash fiction set in the swinging psychedelic ‘60s, and for the most part Fun City fit the bill perfectly. Unfortunately though just as much of it is inconsequential “city politics” boredom that seems lifted from the earlier Tilt!.

In fact, parts of Fun City are almost identical to Tilt!, though I enjoyed this book a lot more. While Tilt! started off promisingly in the acid rock clubs of California before becoming mired in a belabored “evils of politics” storyline, Fun City at least still remembers to give us the good stuff, with many scenes featuring the ‘60s jetset in all its vapid glory. Hirschfeld well captures the over-the-top pretensions of the era, from arrogantly serious “artists” to would-be fashion kingpins. And I love how the back cover informs us that this “caustic novel” is “as vivid as an LSD trip”!

Our hero is Eddie Watson, a very traditional Hirschfeld protagonist. He’s a bitter, 38-year-old alchoholic who was once a trailblazing journalist. But then his paper folded and Eddie spiralled into a period of drunkeness. He’s got an on-again, off-again girlfriend named Molly Purdy who is of course pretty and well-endowed (practically every single woman in Fun City is stated as having big boobs, by the way). But Molly, who works as a reporter herself, has finally gotten sick of Eddie’s uselessness. She loves him and pines for him, but he refuses to see his potential and wallows instead in self-pity. That being said, she doesn’t mind throwing him a free lay every once in a while.

All the swelling desire. The pendulous need from out of some foreign and mysterious place, a call that drew them together in a tidal wave natural and harmonious, all rhythms easy, swinging. Time ceased and there was only the twilight of loving, the stroke of flesh against flesh, of membranes softer than soft, the wetness deep and sensuous, drawing endlessly on reservoirs so long untapped…

All right! I’m not sure what exactly is going on, but it sure sounds hot!!

Through Molly Eddie is brought into the world of New York politics. Eddie is fascinated by Charles Harrison, an altruistic millionaire known for his charities and acts of good will around the world. Harrison’s having a party in his deluxe Manhattan penthouse and Molly’s invited. There Eddie meets the man himself, a graying-haired paragon of manly virtue who likes Eddie’s cynicism and indeed is familiar with Eddie’s work for the paper. Harrison tells Eddie that he loves New York and plans to run for Mayor. He offers Eddie the job of becoming his campaign manager.

Meanwhile Hirschfeld takes us into the swinging jetset via Lilly Harrison, hot-to-trot young wife of Charles. She has a body to kill for and enjoys showing it off with the latest mod fashions. She’s vivacious and obsessed with being famous and comes off way too much like a vapid, modern-day Reality TV star. Eddie wonders why Charles is even with her, but gradually we’ll see there’s a strange bond which unites the couple. For Charles Harrison, you won’t be surprised at all to learn, has several skeletons in his own closet, from switch-hitting to group sex, not to mention ties to various underworld figures. This is revealed rather early on, but our hero Eddie doesn’t discover it until near novel’s end.

Lilly, apparently Hirschfeld’s attempt at writing a Jacqueline Susann-type antiheroine, is ultimately too listlessly self-involved to be very memorable; not to use the word yet again, but “vapid” is the perfect description for her. She yearns to be world-famous, but she’s such a cipher that you neither care for her nor despise her. She lacks the catty cruelty you’d expect from a character like this. Rather, the character who more closely captures this antiheroine nature would be Hester Quinn, basically the Eddie to Lilly’s Charles, a “birdlike” celebrity hanger-on who knows all the hip people in Manhattan and serves as Lilly’s adviser on how to become a mover and shaker in the jetset world. This includes wearing revealing clothes and having sex with random famous men.

And that again is the problem with Fun City. Hirschfeld seeks to capture the “psychedelic salons and beauty-bugged bedrooms” of the “swinging, go-go world of New York City” (per the back cover copy), but he sabotages it with his cynical characters. Eddie hates this world of artifice, Molly distrusts it. And those who do live in it, like Lilly, Marcello, and Hester, are so cipher-like in their narcissim that the reader is unable to vicariously enjoy it through them. The “acid-rock” nightclubs and mod fashion happenings are capably brought to life, as are the mostly-nude, sexually-voracious gals who flock to this underworld in their “psychedelic blue” lipstick, but it’s all undermined by protagonists who yearn for the straight-laced world of yesteryear.

This was the same thing that bogged down Tilt!, by the way, as well as the “politics” material. In Fun City as well we read seemingly-endless sequences in which Charles Harrison will filibuster this or that New York bigwig. Not only is it rendered moot given that these are one-off characters he meets with, but his speechifying about how to make New York great again comes off as so much padding. Clearly this is Hirschfeld’s attempt at eventually pulling the rug out from under us, as Charles is later revealed to be just as “sick” as his wife Lilly; in the course of the novel he cruises a gay area and picks up some dude (later beating him in his shame), then later on he picks up a pair of young girls and takes them back to their place for some nondescript lovin’.

But Hirschfeld does bring to life psychedelic New York City. There’s an enjoyable part where Eddie sees Lilly go off with some new stud and rushes after her, drafting Hester to lead him to her, Marcello tagging along. They go to the Lower East Side, first stopping in the headshop of The Czar, then head on over to a hippie “crash pad” where legions of teenagers have sex on the scuzzy, garbage-strewn floors. Hirschfeld really goes for it in this scene, which culminates with Eddie finding Lilly in an LSD daze, meditating in the lotus position while her latest stud, a playboy named Tolan, whips some other girl who has displeased him.

We also get a lot of Hirschfeld’s typical soap opera-style melodrama: Molly as mentioned constantly spurns Eddie, only to later welcome him back to her apartment with open legs. And Eddie promises to quit the booze and devote himself to both her and Harrison’s campaign. Instead he blows off dates with Molly and gets drunk a bunch of times. After the latest Molly breakup Eddie happens to meet a young social worker named Sarah Jane Parker (yep, she’s busty too!). In a complete disregard for character depth, Hirschfeld has this gal openly throwing herself at Eddie soon after meeting him, offering to make him a meal in her apartment.

Eddie I forgot to mention is an annoying asshole. He eats the meal, has a drink, and tells the girl she’s practically a slut! She’s only in her twenties and he feels she should straighten up and stop bringing strange men back to her place. He leaves without even taking her up on her open offer for sex…then “coincidentally” meets her again during a too-long scene where Harrison filibusts at a school in Harlem. In the ensuing riot (started by Black Panthers), Eddie runs into Sarah again. The two eventually become an item (the “sex scene” above is between Eddie and Sarah), but Molly is still on the sidelines. She’s found out how corrupt Harrison is – he’s almost penniless and indebted to the mob, who funds his campaign – and Molly intends to tap into wealth via Eddie.

The finale of Fun City plays out on an unexpected sequence of turnarounds; Eddie, hearing the truth of Harrison’s underworld activities, hunts the man down in a gay bar. For his troubles Eddie is almost beaten to death by a gang of gay stooges at Harrison’s command(!). Eddie manages to escape them, stealing the gun of one and shooting him before escaping. But he finds no salvation in Molly; when Eddie refuses to play ball and go back to Harrison – Molly wants Eddie to keep working for the man so they can strike it rich when he wins the election – she grabs Eddie’s gun, puts it on him, and calls Harrison to come get him!

After yet another escape Eddie finds true salvation with Sarah, still treating her like shit as he eats breakfast with her, his pistol at hand. The final face-to-face with Harrison isn’t exciting at all, playing more on a suspense angle than the Sharpshooter capoff I wanted. Eddie has gotten hold of some photos of Lilly in compromising positions, and uses these as blackmail to get Harrison to call of his dogs and to drop out of the race. After which it’s back to Sarah, who tells Eddie they should leave the city together. And Eddie has finally gotten an idea for a novel; he’s going to write about these very events, which will make for a surefire bestseller(!?).

Hirschfeld’s writing has the same positives and negatives as ever. He keeps the story moving, brings us into this world, and makes us care for the characters. But at the same time the plot is a bit plodding and the politicking becomes grating. Also Hirschfeld’s affected style is firmly in place – you know, how he takes a sentence, expands upon it greatly, going on and on with it, getting to the heart of it, the core, working it up into a theme, a construction of depth and meaning. Polishing it. Elaborating it. Hammering it out, over and over again, endlessly, infinitely. Until the reader. Cannot take it. Anymore. (You get the drift….)

The core of later Hirschfeld novels can be found here; the entire “psychedelic hippie hell” section in the Lower East Side for example would return in Father Pig, where Hirschfeld made it seem even more hellish. And as mentioned there are many paralells with Cindy On Fire. One thing missing this time is the Hollywood starlet character ususally typical of the “Hugh Barron” books.

Anyway, despite the affected style and the sometimes-plodding pace, Fun City is really vintage Burt Hirschfeld, and did the job of providing the piece of go-go ‘60s pulp fiction I was hoping for.

Here’s the cover of the NEL edition: 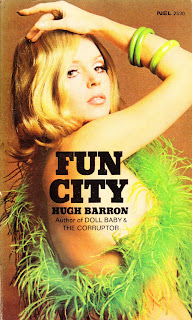 And here’s the cover of the Dell edition from 1984, published under Hirschfeld’s name (interestingly, the back cover copy of this one spins it as a hardboiled yarn): 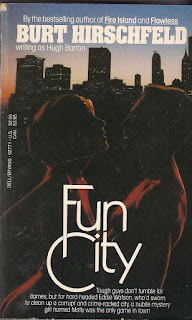