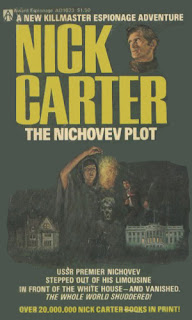 Published in the days when the Killmaster series had taken its unfortunate detour into first-person narration, The Nichovev Plot is nonetheless a very entertaining installment, with our hero going up against a cult that gets off on murder. It was purportedly written by Craig Nova, yet whether this was the Craig Nova or just another author of the same name is unknown.

Delivering all of the lurid, satanic thrills that The Satan Trap denied us, The Nichovev Plot opens with Nick Carter called out of the bed of Chu-Chu, busty employee of a Lake Tahoe casino. Hawk, Nick’s boss at AXE, wants Nick to head to Reno and meet up with Gilly Pontchartrain, a New Orleans-based con artist/hooker who helped Nick take down a Syndicate forger named Vaccacio in an earlier, apparently undocumented adventure. Gilly has called AXE HQ claiming to have info about a plot against Boris Nichovev, the Soviet Premier.

Nichovev is currently on his way for a visit to the US, so Hawk takes this seriously. True to the lurid vibe of this era of men’s adventure fiction, Gilly now works at the top cathouse in Reno. Here Nick, posing as a country bumpkin of a salesman, is shown around the garrish place, the busty madam introducing him to an assemblage of girls and pointing out their various specialties. But Gilly, with her “soft, enormous breasts,” is the sexiest of them all; she recognizes Nick on sight, though she doesn’t know his name.

In her room, while she and Nick pretend to have sex(!), Gilly reveals a sordid story about a group of “weird guys” who have been visiting the cathouse recently. These guys reek of hash and have a faraway look in their eyes and talk of “The Great Mother, who is Death,” and also The Old Man of the Mountain. These guys have screwed seven of the gals at the cathouse, and five of them are now dead, their heads nearly severed by a garrotte. Gilly, who says the dudes also spoke of having been behind the deaths of JFK and MLK, was one of those seven girls – and she’s afraid she’ll be next of them to die.

But enough of that; their simulated screwing has gotten both Nick and Gilly all fired up, and Nova writes a sex scene that’s both lyrical, per the earlier standards of the genre, and graphic, per the mid-‘70s standards of the genre. But when two cops barge in after the mutual whopping orgasms, claiming they’re making a “quiet” bust of the cathouse, Nick soon supsects they are the assassins Gilly feared. The action scene which follows is the first of several in the novel, with Nick using his hidden weapons to take out several cultists, each of whom seem excited to die. Meanwhile poor Gilly is strangled to death by a garrotte, but of course she did just tell Nick all she knew and had sex with him, so what did you think would happen to her?

Things get real when Hawk, meeting with Nick, informs him that Nichovev’s plane just disappeared over the Atlantic. The ransom notice sent to both the White House and to Moscow says that Nichovev will be killed by the death-worshiping cult of assassins on the autumnal equinox (the cover blurb mistakenly has it that Nichovev steps out of his limo in front of the White House and disappears). Nick has just a few days to find out who this cult is and where they are, but there’s nothing to go on. All Hawk can offer is the name of a professor in London who specializes in cults; perhaps this guy, Huff, whose name was “spat out by the AXE computers,” could shed some light on who these people might be.

Meanwhile Moscow has sent their own agent to work with Nick: Anna (who has a much longer name, per Russian standards), a six-foot blonde beatuy with “a figure that would have put Anita Ekberg to shame.” Her big boobs are often mentioned, and she’s hot stuff indeed, but it’s to Nova’s credit that he makes Anna so much more. Speaking in a goofy, nonsensical patchwork of the “American slang” she excelled in back during KGB training, Anna’s other speciality is popping eyeballs out of skulls with her bare hands. She regrets though that she’s had less experience in the latter, as you can only pop someone’s eyeballs out once!  Nova gets a lot of dark-comedy mileage out of this.

When their flight to London is hijacked (the hijacking as arbitrary as could be, as no one of importance is on the flight, and Nick and Anna are undercover), the two work together to take down the hash-smoking hijackers. Nova has a good grasp on action, though sometimes it takes a while for anything to happen. But then, Anna, with her funny dialog, is such an enjoyable character that you don’t mind. And also she does get to pop out several eyeballs during the course of the novel. That being said, Nova at one point mistakenly refers to Nick’s stiletto as “Pierre,” which we all know is the name of the poison gas bomb he tapes beside his gonads (the stiletto is called “Hugo”).

In charge of the hijackers is a sadist named Rubinian, a dude with a horrifying face which was burned by Nick on another earlier, undocumented adventure. Rubinian bails out of the plane while Nick takes out the assassins who have commandeered the cockpit. Reading this sequence in the post-9/11 world was quite eerie. As a “present” for saving her life, Anna rewards Nick “in the Russian way” that night in their hotel room, which apparently entails some oral ministrations before screwing him good and proper in another somewhat lyrical/somewhat graphic sex scene. Here we know the ‘70s are in full force, as Anna’s pubic hair is described as a “blonde forest.”

Sadly The Nichovev Plot falls into a rut after this. Nick and Anna meet Huff, a stuffy professor-type who works in a forgotten section of the British Museum. Huff is one of those annoyingly-convenient characters who knows everything. Nick, the hero of the series, relies on him too much. (And lets not forget that Nick has only found Huff because the AXE computers brought him up as a good source of info – it’s not like Huff has any other relation to the events of the novel.) At any rate Huff says that this cult sounds like a modern take on the old Thugee cult of India, mixed with a little of the Magna Mater cult of Ancient Rome. There’s also some Satanism in there, as we are treated to two Black Masses later in the book.

But the London stuff goes on too long, despite being leavened with some action, including a puzzler of a part where Rubinian shows up…and Nick runs away from him. Why the “Killmaster” runs away from the guy is not really explained. This all eventually leads to a cult ritual Nick witnesses in an old castle in Cornwall; as Nick watches from the shadows, two cultists have ritual sex with a gal before draping her over the sacrificial altar. A priestess comes out with a knife. Before Nick can do anything to save them, he’s knocked out – and Anna rushes in to the fray to kill a “fat Syrian” who she recognizes on the stage, one who has been stealing Soviet arms shipments.

When Nick comes to Anna is gone, which cements his hunch that she’s working for a right-wing faction in the USSR that wants to oust the détente-minded Nichovev. Nick and Huff thus travel secretly to Rome, enduring a harrowing trip across the English Channel during a terrible storm. Anna’s absence from the novel harms it greatly. Luckily though, more sleazy ‘70s sex ensues when Nick and Huff bum rides from a pair of young and insatiable American girls who, convenience be damned, just happen to have a Mercedes. We’re informed they’re so concerned with banging Nick and Huff that they barely even pay attention to the road while they’re driving.

After ditching the girls, Nick and Huff proceed on to Rome, where Huff again proves himself so knowledgeable that the reader has long ago begun to suspect him as well – this time he knows how to access a hidden part of the catacombs beneath Rome, claiming to have visited the site many years before. Nova brings to life the eerie ancient underworld of collapsed temples and lost passageways. The cult meets in a statue-lined cavern where they will murder Nichovev, bound before the altar.

The finale sees a reunited Nick and Anna – who of course wasn’t a traitor after all – taking on legions of black-robed cultists. Some expected reveals occur here, though we do get the memorable image of Nick blowing away the priestess with his Luger. Unfortunately though the finale is given over to a lot of exposition courtesy Huff, as he explains how this or that happened – that is, before Nick escorts Anna to the nearby Colisseum so they can screw under the moonlight.

The Nichovev Plot is a bit frustrating because it starts off so strong – I mean, I was loving it despite my hatred of first-person narration in the men’s adventure genre – but then it just sort of tapers off for a too-long stretch. Also, removing Anna from the story was a big mistake; Nova made her too entertaining and memorable to just forget about her for fifty or so pages. But at any rate the good stuff here is really good, and I look forward to reading the other installment credited to “Craig Nova:” Dr. Death, which was published as the hundredth volume of the series.
Posted by Joe Kenney at 6:30 AM

According to a few comments on the Nick Carter and Carter Brown Blog signed Craig Nova he did not write Dr.Death. Both Mengel & the Spy Guys Webpage credit #100 with Nova. Which one it true is anybody's guess.

Anna was a lot of fun. Compared to the dead-serious spy-fiction of Allbury and Freemantle (or le Carre) this was more in the spirit of the Bond movies of the time. The car ride to Rome was hilarious, though.

Thanks for the comment, Andy. I wish Anna had returned for another volume. I think the Nova attribution comes from Will Murray's 1982 article "The Saga of Nick Carter: Killmaster" in The Armchair Detective; he states Nova as the author of these two works but doesn't elaborate on it. Judging from the article as well as the 1981 interview he did with Engel (published in a 1986 issue of Paperback Parade), Murray somehow had put together a list of who had written what volumes, but the list was incorrect in some regards -- for example, Engel stated that many of the volumes attributed to George Snyder were actually written by Engel himself. Anyway, whoever did write "The Nichovev Plot" has nothing at all to be ashamed of!