The Spider #10: The Corpse Cargo 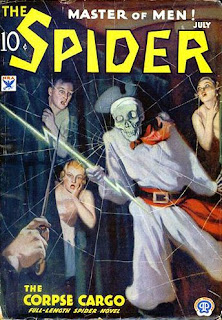 One of the best volumes of The Spider I’ve yet read, The Corpse Cargo sees our unhinged hero Richard “The Spider” Wentworth dealing with a gang of modern pirates led by a gorgeous villainess who gets off on murder, the almost supernatural menace of “Green Fire,” and of course the usual resilience from the public and the cops he’s sworn to protect.

It’s a scorching July afternoon and Richard Wentworth is on his way to see his best friend/worst enemy, Police Commissioner Kirkpatrick. “You and I both know you are the Spider,” Kirkpatrick says, thus clearing up any confusion readers might’ve had from previous volumes; yes, Kirkpatrick does know, and claims he always has. However he needs proof before he can arrest his “best friend.” In the meantime there will be an “armed truce” between them.

Kirkpatrick’s called him Wentworth here because the top cop has a Spider ring, which he claims was given to him by a young boy. Wentworth immediately knows who it was: young Jim Walsh, the lad who helped his hero the Spider in #6: Citadel Of Hell. Laughably, as soon as he sees the ring Wentworth turns around and runs out of Kirkpatrick’s house, rushing for the inner-city tenement in which Jim lives, despite Kirkpatrick’s pleading for him to stay. I mean, Kirkpatrick hasn’t even finished his sentence before Wentworth takes off; such headfirst rushing is not only typical of our hero but the Spider novels in general.

The Corpse Cargo breaks one of the main rules of pulp fiction, or at least of mainstream pulp fiction: kids get killed in it. (But then, kids are always getting killed in the world of The Spider.) Wentworth finds the clubhouse in which young Jim and his pals in the “Spider fan club” meet, only to hear the sounds of a struggle within. He breaks down the door, and Norvell “Grant Stockbridge” Page well captures the eerie, spectral image of a man holding a “green-glittering knife” over a bound boy in the dark cabin. Wentworth promptly blows the knife-wielder away, but the boy, who turns out to be the grandson of an inventor named James Curley, is dead. His flesh has been burned by the knife.

Wentworth, wearing his customary “skirt”-type mask (meaning this isn’t an installment in which he dons the “Tito Caliepi” old man disguise), tells Jim Walsh that he’d “never again be able to sleep” were he to know the Spider fan club still existed after this day’s horrifying events. He tells the kid if he wants to help out, go help the local police. But despite this Wentworth apparently decides that little Jimmy can serve as his ostensible sidekick, but don’t expect any pandering to younger readers; indeed, the boy comes and goes in the narrative. As ever, it’s Wentworth’s show, and he’s as driven and merciless as ever. And as can be told by the above, The Corpse Cargo pulls no punches.

Through Jim, Wentworth learns of old Curley’s inventions; one of them is a sort of harnessed chain lightning, and he figures this is none other than the “Green Fire” these pirates have been using lately. In a crazed chapter titled “Modern Piracy,” Page shows us this invention in nightmarish effect as so-called “pirates,” under the command of Captain Kidd (a woman), waylay a passenger train. The Green Fire electrocutes everyone on board, and Page again goes to his customary gruesome lengths in describing the deaths of the unfortunate passengers.

As bad as this is, the aftermath is even worse, as the pirates show zero regard for human emotion, looting the stilled train and pulling jewelry and valuables from the fresh corpses, even hacking off bejeweled limbs. And from afar their depraved leader, Captain Kidd, watches with relish. Page skirts the 1934 pulp line with overt intimations that the lady gets off royally on killing; at one point he practically writes that she orgasms as she watches the Green Fire destroying the train’s passengers. A busty brunette with short hair, Kidd shows up a bit more frequently than the typical Spider villain, which is to the good – I love depraved female villainesses, and Kidd’s one of the best yet.

In fact, Wentworth’s first meeting with Kidd is one of the book’s many highlights. Tracking the pirates down after many battles to a remote cabin outside of New York, Wentworth is promptly captured. Kidd, whose minions serve her with total fear (“Hurry, darlings, or mama might get angry,” she memorably warns them at one point), shoots down a henchman who failed her and then has Wentworth stripped, tied up with copper wire, and kerosene dumped on him. And on Jim Walsh! She leaves them there to be destroyed by the Green Fire. Wentworth’s gradual, nick-of-time escape has him even more driven than ever to take down these sadistic villains; during his struggle to escape the pirates have already fried and looted another train filled with innocent people.

The middle portion of the book loses its way a bit, as is typical with most Spider installments; Page, uh, page-fills with the go-nowhere digression of Wentworth chasing various false leads, among them the “dapper gunman” Dutch Brogard. What’s humorous is that in most cases, after hearing about these red-herring characters and searching everywhere for them, Wentworth usually locates them after they’re already dead. Old inventor Curley also turns up, though he’s more shaken by the abduction of his granddaughter Nellie, who we learn in unexplored background is actually his niece or something. What Wentworth doesn’t tell Curley is that Nellie is already dead, killed of course by the pirates.

But where are Wentworth’s customary assistants? Loyal Ram Singh is there to drive him around as usual, but doesn’t contribute as much this time around. Even more inconsequential is poor Nita, whose part in the saga would be greatly expanded in later volumes (like #75: Satan’s Murder Machines). In these early books she’s mostly bait for Wentworth, perfunctorily captured by the villains, all of whom know without question that Richard Wentworth is the Spider. We do get a nice little moment when Wentworth, finally meeting up with Nita, gets choked up as he watches her playing with Jim Walsh, realizing all he keeps from her by denying her marriage and a family. It’s an unexpectedly moving moment, and indicative of the quality writing you get from Norvell Page, who clearly and obviously cared about these characters.

Page also delivers on the airplane fiction apparently demanded by 1930s pulp readers; there’s a long, almost arbitrary bit where Wentworth flies along on a postal plane. Kidd’s pirates we learn have also been crashing and looting cargo planes, and Wentworth figures out that it’s by fake radio beams which get the planes to go off course, bringing them into range of Green Fire cannons or something. Wentworth flies back in his own plane for a solo assault, and this is another highlight, where Wentworth goes to Marksman-level sadism, at one point hanging a pirate corpse from a noose in front of a door as a gruesome greetings to the other pirates within! In another darkly humorous part he uses his “Spider Web” to drag a corpse across a field as a decoy.

Of course, poor Nita is perfunctorily captured by Captain Kidd, but it’s not as simple as Wentworth just rescuing her: Kidd has film footage of Richard Wentworth, standing over a pile of gunned-down pirates, and removing his Spider mask. In other words, Kidd has the very evidence that “best buddy” Kirkpatrick needs to haul Wentworth’s ass to prison! So Wentworth, after sliding down a bannister while blasting a machine gun (a la Roger Moore in Octopussy), must swallow the bitter defeat of giving himself over to the pirates, despite having just saved Nita from them.

Page toys with the idea that Kidd, dressed in “venemous yellow silk” which shows off her bodacious bod, might have some fun with Wentworth, but she’s more into straight-up killing than any sexual hijinks. Indeed Page again skirts the lines of his era by writing another orgasm for Kidd, one which she experiences as she uses her electric knife to carve up the flesh of a traitor. The orgasm even leaves her so visibly weakened that Wentworth mocks her. “Panting breasts” and “heavy-lidded eyes” are all the tools Norvell Page has at his 1934 disposal, but he does a phenomenal job of getting his lurid message across; this is one disturbed lady.

The finale is an extended sequence in which Wentworth is intended to be fried on a passenger train with another group of innocents, but he of course manages to turn the tables…and then gets on the train anyway, despite knowing it’s doomed to be zapped by Green Fire. Page, apparently realizing he’s gone most of the novel without much featuring the supporting characters, says to hell with coincidence and has most of them just happen to also be on board…even Apollo, Nita’s Great Dane! Wentworth, biding his time too long, realizes he only has moments to spare to evacuate the train; he recruits Nita to assist. This part is gripping and all, and Wentworth et al are definitely up against a ticking clock, but it goes on too long.

Wentworth displays more of his lovable sadism as he gets back in his insulated coffin while the pirates, not knowing the train has been evacuated, come aboard to loot – just as Wentworth has triggered the train to go backwards, back over the wires across the tracks which activate the Green Fire. Unfortunately this means there’s no gun-blazing finale for The Corpse Cargo; when Wentworth comes out of the coffin, the bastards are all already dead, fried to a crisp. This continues to the climax, which sees Captain Kidd fighting to the death against her henchman, Bolo, while Wentworth stands by, Bolo pissed at Kidd for betraying him. Oh, and turns out Kidd was old Curley’s daughter – yet another bullshit Spider “surprise” villain identity reveal.

Anyway, this one was up there with #15: The Red Death Rain, consistently entertaining despite a few narrative bumps here and there. It also didn’t achieve the lurid heights of that later volume (what with its “the orangutan had mated” finale and all), but it was fun to see the Spider going up against one of my favorite stock pulp characters: the warped villainess. But then I haven’t been disappointed with a Spider novel yet.
Posted by Joe Kenney at 6:30 AM

Great review Kenny! I just picked up a copy of The Spider: City of Doom. It contains 3 novels-The City Destroyer, The Council of Evil and The Faceless One. Can't wait to give this a go.
By the way, great blog. You have to be one of the hardest working blogger I have ever seen! Keep up the great work!

Thanks a lot for the compliments, really glad you enjoy the blog. I don't have City Of Doom. I should get that one. I do have a reprint of Council Of Evil which contains the original illustrations, though. That one looks pretty interesting, about the criminals banding together against the Spider. Gee, I wonder who will win??