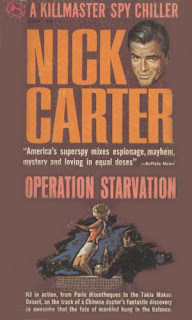 Nicholas Browne’s first volume of Nick Carter: Killmaster is even more entertaining than his last one, The Bright Blue Death. Of course, that one had an unfrozen viking warrior, but I felt it got a little bogged down by trivialities. Operation Starvation on the other hand moves at a steady clip, even if it doesn’t have some of the far-out characters or incidents of The Bright Blue Death.

Actually Nick’s assignment is sort of far-out: a Chinese scientist named Dr. Lin has created this spore that could either fuel crops or destroy them. If these spores were to get into the wrong hands they could wipe out an entire civilization.  Dr. Lin has apparently realized that his Chicom masters would use his creation for evil and thus he’s attempted to defect to the US. Unfortunately he has been captured, and is now detained in the Red Chinese nuclear testing grounds in the wasteland desert of Takla Makan, in the hinterlands of China.

Dr. Lin has a daughter, Kathy, who is in Paris; Dr. Lin refuses to do any work for the Reds unless she is returned safely to him. Hawk, Nick’s boss at AXE, figures that Dr. Lin would attempt to escape again were it proven to him that Kathy was safely in the hands of American agents, so he puts the Killmaster on the job. We meet Nick as he’s already in Paris, and the action begins posthaste as a car full of Red Chinese agents come blasting at him. Nick takes them out with Wilhelmina, his Luger, and some of his fancy martial arts moves.

Nick we learn has recently gone through a rigorous training session which took place in the desert. This has resulted in him being in peak physical condition, which must be saying something. To be sure there’s a fair bit of hero-worship going on in Operation Starvation. We’re constantly being reminded of Nick’s rugged good looks, his superb muscles, his mastery of all forms of combat, his almost superhuman expertise in all fields. This almost brings to mind the romance novel flavor of the first Killmaster installment, Run, Spy, Run, though it doesn’t go to such extremes.

The Americans have no idea what Kathy Lin looks like, but they do know that she had contact with a Paris-based reporter named Dominique St. Martin, who was recently nominated as “Go-Go Girl of the Year.” Nick’s task is to find Kathy, and he’s teamed up with a CIA contact named Rusty Donovan, who couldn’t be more based on Felix Leiter. Ol’ Rusty is practically useless, constantly being knocked out or fooled; there’s a part where he’s even thrown off a third-floor balcony by Chicom agents (he survives, though). So even though Nick has a partner, he really works alone in the novel.

Dominique is a hotstuff blond with a jaw-dropping bod; the daughter of a billionaire, she moves with ease through the jetset and apparently is close with Johnny Wu, the top Red Chinese agent in Paris (we’re informed he looks like Anthony Quin.) Nick tracks them all down to a club where Johnny shows off his sharpshooting skills by shooting a cigar out of Dominique’s mouth. This bizarre incident is not explored. Instead Nick gets in a shootout with some of Wu’s agents, followed by a long carchase with Dominique, which ends with her crashing into a lake and a nude Nick diving in to rescue her.

Dominique, now nude herself, tells Nick that she thought he was an agent of Johnny’s. She’s dedicated herself to helping Nick stop the Chinese sadist, and will help locate Kathy. Meanwhile, it’s time for some good lovin’. Off they go to Dominique’s palatial riverboat, where Browne delivers a three-page sex scene that manages to be both somewhat-explicit and metaphorical/lyrical, with such lines as, “Then her long supple body fell back, pulling him with her, and the magnificent thighs formed a great V, urging him into the hot cave of her desire.” Browne also develops this goofy horse-riding analogy, with Nick “roweling her with the hard spur of his masculinity,” and “On his milk white steed Nick mounted toward the stars.”

So in other words, these two get along great. This is another of those Killmaster novels where Nick practically falls in love; Dominique is so pretty, has such a great body, and is so vivacious that Nick is smitten. Gee, wonder what will happen to her? Dominique reveals that Kathy Lin has a special signet ring, something Nick is certain Johnny Wu doesn’t know. He figures if he can get that ring, he can prove to Dr. Lin that Kathy is safe. Dominique has a meeting coming up with the girl and Nick spies the location out, as well as Johnny Wu’s guarded villa. We also get a brief visit to a nightclub, where Nick listens in annoyance to some moptopped mod band while Dominique dances.

Browne again doesn’t exploit the violence factor, but there’s a good bit of action in the novel. There’s a particularly long sequence in the docks area of Paris where Nick takes on more of Wu’s goons and a bunch of French dockside workers who believe Nick is a wanted felon. It culminates with Nick appropriating a forklift and bashing in the wall of a butcher shop, where up in the loft he finds a young Chinese girl dressed like a Parisian streetwalker. It’s none other than Kathy Lin, who has been hiding up here as well as in a bordello. This latter part hasn’t worked out, she reveals, as Wu’s men heard there was a new Chinese girl in the place and kept coming over to see her.

Nick hands Kathy over to Rusty, but he’s out of luck because Kathy gave her ring to Dominique. And now Dominique’s been captured. Nick goes to rescue her at Wu’s villa, only for the mandatory incident of Nick himself being captured. Strapped to an operating table, Nick has various electrodes applied to his nude body by Arthur, Wu’s sadistic, pudgy henchman, who gets off on torture and cackles like a madman, speaking in pidgin English all the while (“I’m vely solly,” and the like.) Wu reveals that they’ve already had their fun with Dominique, and boy is it the most grisly ending for a female character yet in the Killmaster saga:

“Arthur, in his enthusiasm, took her to the stables and smeared her with the vaginal excretion of one of the riding mares, then tied her to the belly of my new stallion. The results were…” Wu spread his pams and shrugged.

When Dominique’s battered and bloody body is trundled into the room, Nick is barely able to look at her, seeing in his mind “the frightened goaded horse plunging” into her. And she’s still alive, but just barely. Wu leaves Arthur to have his fun, and Nick’s jolted a bit. But in another of those laughably deus ex machina instances, Nick’s able to pry a few electrodes loose and free himself. But rather than hook Arthur up to his own torture device, Nick merely strangles him. Just in time for Dominique to die in his hands, giving him a happy smile and handing over Kathy Lin’s signet ring.

Nick heads to the Takla Makan desert in the homestretch; now Kathy too has been captured by Wu (yep, Rusty has failed again; he was supposed to protect her), and Nick’s job is to free Dr. Lin before Wu can get to the desert testing grounds with her. Assisted by a band of Khuf tribesmen, Nick humps it through the desert to a special air drop courtesy Hawk: a small helicopter with two seats. After much buildup, Nick only flies the craft for a few pages, rather easily swooping into the Chinese nuclear test base, finding Dr. Lin, and swooping out while dodging ground fire.

Dr. Lin safe, Nick now determines to save Kathy, who is prisoner of Johnny Wu and held in another of his guarded villas, this one in Biarritz, on France’s Bay of Biscay. Rusty Donovan shows up to “help” out as uselessly as before – and is of course summarily gunned down in the climactic assault on Wu’s fortress. Browne’s merchant seaman background comes into play in the final bit, where Wu escapes with Kathy on a small boat and Nick sneaks aboard and wreaks destruction, casting the boat adrift on a stormy sea.

The final fight with Wu is good, with both men using their martial arts skills; Wu, despite being a tough guy, can’t swim, and Nick watches him drown. And of course there’s Kathy, back on the boat, offering herself to the Killmaster – she might look young, but she’s all woman, something which she wants to prove to Nick posthaste. Nick reflects on poor Dominique for all of two seconds before hopping into bed with Kathy. Browne treats us to another somewhat explicit/somewhat lyrical sex scene, and that’s that for Operation Starvation.
Posted by Joe Kenney at 6:30 AM

I never read any of the Carters from this era except for the first two but I remember thinking that the portrait of Nick that graces the covers from this period was pretty much what the guy looked in the same way that other artists like Gil Cohen rendered other popular series character "portraits" like Shell Scott, Mack Bolan, Mike Shayne etc.

A Chinese agent who looks like Anthony Quinn? Nice! :D

Thanks for the comments. Stephen, funny you should mention that; I recently read an interview with Killmaster/Operation Hang Ten author George Snyder, from a 2006 issue of Paperback Parade, where he mentions the Nick Carter portrait on the early volumes:

Covers of the early Award imprint Nick Carters were great. They depicted spy/adventure, with a handsome sophisticated Nick Carter in the upper corner. When [Charter Books] took over, the covers went to hell. They came off crude, with our hero looking coarse enough to be a villain.