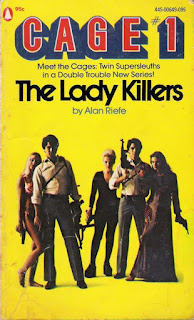 Brought to you by the same imprint that published Hardy, Cage ran for six volumes and was more of a men’s adventure deal than the aforementioned bore of a private eye series. Alan Riefe, a real person and not a house name, turned out the action-packed tale of “twin supersleuths” Huntington and Hadley Cage, as represented by the studly ‘70s dudes on the photo cover with their groovy ‘70s chicks.

The Lady Killers is a good opening to the series, as it features my favorite pulpy concept: good-looking female villains. As part of his P.I. work, Manhattan-based Huntington Cage comes across the Chain of Silk, an five-woman hit squad that works for the mob. However there’s no part where Cage or his brother get busy with any of the sexy ladies, and indeed Riefe seldom even describes the women. He instead plays more with the Chain of Silk being like a “women’s lib” movement in the mob. As a minor character complains, “Women are getting into everything these days.”

“Hunt” Cage, who I suppose is the main protagonist of the series, doesn’t fare very well in this first volume. Within a few pages he’s gunned down on the street, shot by a hitman posing as a motorcycle cop. The hit was ordered by Angie Visconti, obese Mafia cretin. But Hunt survives and is in the hospital; Visconti sends the same hitman to kill him there. But Hunt has a mysterious savior, an unseen figure summoned by a special transistor switch on Hunt’s wristwatch; the savior blows away the hitman and fades into the shadows. Six weeks pass and Hunt has sufficiently recovered…and meanwhile, Angie Visconti himself has been blown away, by that same mysterious figure.

Meanwhile, we already know who the mystery figure is – of course, it’s Hunt’s twin brother, Hadley “Lee” Cage. An artist based out of New Jersey, Lee helps Hunt in his investigations for reasons that are never disclosed. Honestly, there’s no reason why Lee, a successful artist and ladies man, would keep meeting Hunt on the waters beneath the George Washington Bridge (the two brothers never venture to each other’s stomping grounds, so that no one will ever figure out that either of them has a twin brother) and agreeing to fill in for him on certain jobs. But Lee’s even Hunt’s gun supplier, hooking him up this time with a .357 magnum he insists Hunt try out.

Anyway, it doesn’t matter, as that’s the novelty factor of this series: the world doesn’t know that there are actually two Cages, identical twins. Actually this gives the series a bit of a ’30s pulp vibe; the idea of Hunt Cage having a special gizmo watch which will alert his twin brother is so weird that you could see it being a big hit with Depression-era readers. But Riefe wisely sleazes it up a bit, mandatory for ‘70s pulp, in particular with digressions on “the art of making love on a waterbed,” as Hunt reconnects with his redheaded girlfriend, Rosemary O’Boyle, a beat cop. Riefe doesn’t go for full-bore sleaze but we do get a lot of info on how to properly screw on a waterbed.

Meanwhile the brothers try to figure out who is apparently continuing Angie Visconti’s assassination work. Lee cases the man’s family in Jersey while Hunt tracks down Visconti’s sole Manhattan-based family member: a twenty-something daughter named Marie, a gorgeous blonde with big breastesses who is so perky and upbeat when she meets Hunt Cage that he figures there’s no way possible this chick could be a hitwoman. Plus she’s a schoolteacher and has no knowledge of her dad’s wrongdoings. So who’ll be surprised when Hunt and Rosemary come back to Hunt’s apartment one night and there’s Marie Visconti, in a skintight black jumpsuit, leaping out of his apartment window and running acrobatically across the rooftops?

She’s left behind a vial of nitro glycerine, intended to blow up an unsuspecting Hunt when he opened his medicine cabinet. After checking the rest of the place, instead of calling the bomb squad for a thorough search, Hunt and Rosemary head on over to the waterbed for more of that good stuff. Who’ll be surprised when the next morning the living room explodes – turns out there was another bomb, hidden in the television set – and Rosemary is killed in the blast? Hunt’s so consumed with vengeance that he’s not thinking properly, so Lee bashes him on the head and takes him back to his place in Jersey so Lee can pose as Hunt in Manhattan and draw out Marie Visconti.

Lee Cage turns out to be the better protagonist; within moments of posing as his brother he already draws out one of the members of the Chain of Silk and blows her away as she’s planting explosives on Hunt’s boat. Despite the women’s lib angle of the Chain of Silk, these girls are all bunglers, constantly goofing up. I’d like to think this is “subtle” commentary on Riefe’s part, but again, he really doesn’t exploit the fact that these particular assassins are all women. It’s such a head-scratcher of a miss that you really don’t know what to think. But anyway, they’re now down one more thanks again to Lee, and soon thereafter he takes out yet another in a firefight.

Meanwhile, Hunt, the “star” of the book, spends his time running away from Lee’s hot-to-trot girlfriend, Mina(!). Seriously, Hunt’s in the dumps due to his girlfriend’s death, but long portions are given over to Hunt trying to throw off the busty gal, who’s burnin’ for some good lovin’. And Lee continues to act more like the protagonist of an action series, tracking Marie and another of her assassins up to Vermont, where he eventually deduces that they are planning to assassinate a crusading old journalist named Atherton.

Hunt finally gets in on the action in a long sequence in the Hotel Gatewood, in Harlem, a posh all-black luxury palace in which a bigwig loan shark named Breadman resides. Hunt has learned Breadman too is on the hit list, though the man disbelieves Hunt’s story. But when one of Breadman’s goons tries to kill Breadman, everyone realizes that Hunt was on the level; Marie Visconti, back from Vermont, is in a hotel across the way, holding the goon’s family hostage. The goon is to kill Breadman, or the family gets it.

Devising an elaborate scheme, Hunt swindles the lady with a fake corpse, so that when she pops out of her hotel window with a rifle he shoots her, hanging from an old stone gargoyle on the Hotel Gatewood’s edifice. Yes, Marie is summarily killed off, with little buildup or payoff – Hunt just shoots her, and that’s that. More focus is given to the stuff up in Vermont, where Lee poses as Atherton in a parade, dodging yet another unsuccessful Chain of Silk assassination attempt. Shortly thereafter the brothers switch places, Lee back to Jersey to boff Mina, and Hunt engaging the final two Chain of Silk gals and two Mafia hitmen in a protracted action scene in the forest.

Hunt doesn’t even kill the Chain of Silk girls, just capturing them after blowing away the rifle-toting men in their party. He calls the law and that’s that; there’s no resolution to the Chain of Silk or explanation of how or when Marie Visconti put them together, even why they were still operating after Marie’s death. It’s all very anticlimactic, but that’s unfortunately par for the course for many of these cheapjack ‘70s action series. Otherwise Riefe’s writing isn’t bad, with a bit more word-spinning than typical of the genre and a good touch with the dialog exchanges. Actually the writing is for the most part so good that it actually makes you expect more from the plot, which is why I’m coming off a little too hard on it.

At 172 pages of fairly big print, The Lady Killers moves pretty fast. Riefe has a firm handle on the requirements for ‘70s men’s adventure fiction, from the action to the sleaze to the generally lurid feeling, and I wonder if the series would’ve lasted longer if it had found a home at a more appropriate imprint, particularly Pinnacle Books.
Posted by Joe Kenney at 6:30 AM