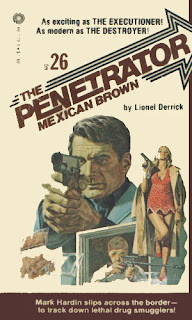 In this installment of The Penetrator, Mark Hardin heads south of the border to kill more Mexicans, which seems to be one of his hobbies, given how many times he’s done it before. Seriously though, Mexican Brown is a mostly good volume, Chet Cunningham continuing to show the renewed investment he displayed in his last installment .

“Mexican Brown,” briefly mentioned at the close of the previous volume, is a virulent strand of heroin that is manufactured in Mexico and brought into the US by mules posing as “wetbacks” (the term used here as frequently as it was in #21: The Supergun Mission). But this strand kills its victims, snapping off the brain functions and resulting in a painful death. Mark Hardin when we meet him is busy posing as a “wetback” himself, watching the other Mexican runaways on the San Diego border.

Meanwhile Cunningham inserts another, more interesting subplot in Mexican Brown. A pretty but somewhat-haggard and somewhat-flabby woman named Gina, who lives in an opulent beach house in Malibu, has put out a contract on the Penetrator. Cunningham keeps her identity a secret, but she has a score to settle with him, even though she doesn’t know what he looks like or any other pertinent details.

In a mirror of the same scenario series co-writer Mark Roberts came up with in #23: Divine Death, Gina feeds a bunch of data to a computer, hoping to get an extrapolation of who the Penetrator might be and where he’ll strike next. Too bad Gina isn’t aware of Frederico Calucci, the Mafia don who tried the same thing in that Roberts installment; he could’ve saved her a lot of time and effort. (And speaking of which, where the hell is that ninja Calucci hired to take out the Penetrator??)

Gina employs a contract hitman called The Maestro, who wears large sunglasses, leather gloves, and carries a rifle of his own design which can be assembled into various configurations. (George Wilson provides a perfect depiction of the Maestro on the bottom center of his awesome cover painting – and this is one of my favorite Penetrator covers yet; I guess the blonde is supposed to be Gina, but she sure isn’t described as being so sexy.) We meet The Maestro early on as he carries out a hit for Gina, blowing away a Mafia lawyer while the man swims naked in a pool.

Cunningham (perhaps) injects more continuity into the series with the appearance of Captain Kelly Patterson of the San Diego police department; formerly he was a cop in Los Angeles and “five years ago” he helped Mark bust a heroin ring there. I’m not sure if this is a reference to #2: Blood On The Strip, which featured a sequence in California (and I’m too lazy to dig out my copy and check), or if it’s just a newly-invented background courtesy Cunningham. At any rate Kelly is privy to the fact that Mark is the Penetrator, and it’s a recurring joke between the two that he’s about to turn him over to his fellow officers.

With its overbearing anti-drugs messaging, Mexican Brown comes off like a prefigure of Cunningham’s later Avenger series. We get lots of rhetoric about the evils of drugs, either through expository dialog or straight-up narrative ranting. But remember, this is a kindler, gentler Penetrator, as compared to the rough-hewn hero of the earliest volumes, so we also get a bit of social commentary as Mark at one point goes undercover as a heroin addict and meets a group of haggard and diseased street-dwellers, all of whom have been destroyed by heroin, and Mark reflects sadly on their plight.

Almost halfway in Cunningham returns to the arbitrary doldrums of #22: High Disaster, devoting several endless pages to Shorty Rodriguez and his sexy daughter Francisca. The two live on a fishing boat, and Shorty is the man who is cooking up the infamous Mexican Brown; Francisca is part of the business, usually driving out armed with a pistol to collect payment. And yet Cunningham spends more time on pedantic details about their fishing activities and the meals they cook. It’s all so mind-numbingly boring and could’ve easily been whittled down, if not cut out entirely; what makes this especially strange is that Mexican Brown seems longer than the average Penetrator installment, with smaller print.

There are periodic flashes of action. During an early infiltration into Mexico Mark blows away a few goons and scares one of their henchmen into working for him; through this guy Mark learns that the various gangs in Mexico are importing their heroin from a certain person. Also the deal extends to the US via a sadistic millionaire named Harry Case. Meanwhile Mark runs into Francisca one day and takes her out for coffee. He quickly deduces that there’s more to this “pretty girl” than meets the eye, and soon has confirmation that she’s part of the heroin trafficking. However Cunningham does nothing with the Mark-Francisca dynamic, and she is for the most part a poorly-rendered character, mostly a cipher.

One highlight has Mark, back in California, posing as a Mexican Brown seller; his buyer is Case, who sends a chemist to verify the drug. They ride around in a trailer while the chemist does his work, but it quickly escalates into a brief action scene, where Mark shows flashes of his earlier mercilessness, blowing the chemist away point blank. But Mark Hardin isn’t very bright; after an endless foot chase with Case, who desperately tries to run from a raid on his house, Mark captures the millionaire and presents him to those above-mentioned street dwellers, telling them this is the “sadist” who has raised the price of heroin too high for them, the man who has made them addicts – indeed, the man who has been killing them for fun, thanks to poison in the horse.

Well, how do you think that goes? Despite Mark’s insistence that Case not be harmed, the street-dwellers still manage to rupture his balls with a brutal kick to the crotch(!) and then tear him up. It’s all almost exactly like the climax of #14: Mankill Sport, so you’d think our hero would’ve learned. Instead he hands Case over to Kelly, and after the briefest and most anticlimactic of shootouts with Francisca and Shorty (Mark shoots Francisca “through the wrist,” by the way), that’s that; the father and daughter surrender and the whole Mexican Brown situation is almost hastily cleared up.

In the final thirty pages, Plot B takes precedence. Gina has figured out where the Penetrator apparently lives, and has sent a private investigator out into the desert wasteland overtop his hidden Stronghold. Coincidence be damned, Professor Haskins and David Red Eagle have just installed a fancy new early warning system, which allows them to track anyone who comes near this desolate area. When a “rock hound” just happens to show up and “passes out” from the heat, the trio watch on monitors and assume it might be a decoy, but Mark eventually goes out and wakes the guy, who appears to be normal.

The final pages of Mexican Brown play out in a Most Dangerous Game scenario, with Mark, out in the desert and unarmed, being shot at by a hidden sniper who misses him due to sheer luck. It is of course the Maestro, and the Penetrator puts his Indian-trained survival instincts to work, flushing the older hit man out of his hiding place and finishing him off. But now Mark and colleagues are concerned: who hired the hit man? Mark dumps the corpse by the road…and waits for the man to be identifyed on the news!

The climax is really bizarre and clumsy. A Mercedes pulls up in front of the hidden garage entrance of the Stronghold the next day, a somewhat pretty lady of around thirty and “at least twenty pounds overweight” driving it. Well, Mark just goes on up to talk to her! It’s Gina, of course, who attempts the lamest murder ever, just casually pulling a gun on Mark, who knocks it away…and then asks her to come inside and watch the Packers game with him! Professor Haskins even shows up with some cold drinks!!

But Gina is “contrite” and gets back in her car, refusing to budge. After going back into the Stronghold and letting her sit there for an hour(!), Mark goes back out and Gina asks him for directions on how to get back into town – and asks Mark if he’ll ride with her(!!). So Mark gets in his pickup truck and the lady attempts to run him over, which ends in her flying off a ravine and dying as her car crashes and explodes. From her purse, which flew out the window, Mark sees that she is Gina Scarelli, and conveniently enough has kept a detailed diary of her five-year scheme to find and kill the Penetrator(!!!).

Gina, who accused Mark of killing her father and many of her friends, turns out to be the daughter of Don Pietro Scarelli, who we are informed was the Mafia kingpin who ordered Mark’s death before the events of the first volume, and who also murdered Mark’s fiance, Donna. So that takes care of that. Now Mark wants to head back into the Stronghold and watch a three month-old Packers game on his Betamax! And then he’s going to see about his girlfriend Joanna Tabler, who claims that three of her cats have been adbucted in the past few weeks, thus leading us to the next volume, which will have the Penetrator going up against…petnappers!

And I just noticed that, starting with the previous volume, The Butcher is no longer mentioned on the cover, along with The Executioner and The Destroyer. Probably because The Butcher was on hiatus from October 1977, when James Dockery published his last volume, to December 1979, when Michael Avallone took over.
Posted by Joe Kenney at 6:30 AM

I figured out why the Penetrator doesn't like Mexicans. He's Apache. Mexico used to pay for Apache scalps. Hardin must have read Blood Meridian and gotten really mad.

The first dozen or so volumes of THE PENETRATOR are available as e-books now, with some rather unfortunate covers but the very grabbable-price of 99 cents. Of course I prefer the actual books and their awesome cover paintings, but my poor aging eyes have trouble with the tiny print ...

I think you might be on to something FreeLiverFree! (And I think Blood Meridian will probably be considered alongside Moby Dick in the future...that is, if people still read adult novels and everything hasn't descended into pre-teen focused Twilight/Hunger Games/whatever banality.)

Englishteacher, that's cool to hear, and 99 cents is a great price...almost enough to justify reading these in digital format and thus missing the feel of the old pulp paper and the excellent original cover art.

And the Penetrator series seems to be selling amazingly well on Amazon, in the top 4000. There might be hope for humanity yet.