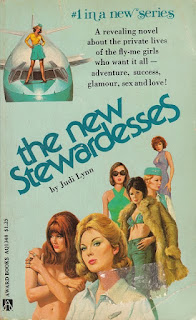 I’d never heard of this obscure stewardess cash-in series from the ‘70s  until Curt Purcell reviewed it a few years ago. I picked up the first two volumes at the time, and consider myself very lucky to have recently come upon the uber-rare third volume, The Diary – and for a nice price, too, thanks be to the gods of trash. But if this first volume’s any indication, The New Stewardesses isn’t really much to get excited over.

Clearly designed to capitalize on the success of Coffee, Tea, Or Me (something which is even acknowledged in the book itself), The New Stewardesses treads a clumsy line between a regular sort of novel and the pseudo-factual style of many of those “tell-all” kind of books. Only the author, whoever he or she is, seems unable to tell a sensible tale, constantly backpedaling and stalling. In fact, the majority of the novel is told in summary, which gets to be quite annoying after awhile.

Telling the story of six recent graduates of World Wide Airlines’s stewardess school, the novel is more soap opera than sleaze, randomly hopscotching from point A to point Z in the hectic romantic lives of its six titular characters. Author Judy Lynn doesn’t do much to differentiate her heroines, which makes the back cover copy a godsend. For we must rely on it while reading the book to know who the hell is who:

CAROLE: An old-fashioned girl torn between a man who wants love and marriage and the rich, young playboy only out for kicks.

SANDY: She discovered a different kind of love in stewardess school, with a beautiful classmate who offered much more than “coffe, tea or milk.”

CYNTHIA: She could write her own Masters and Johnson report. One of her sexual adventures was at 10,000 feet – and then there were the really way-out things she did.

JENNIFER: Behind her angel’s face lurked a ruthless drive to succeed. If getting ahead meant sleeping around, it was worth it.

IRIS: An incurable romantic, always falling for the wrong man at the wrong time – a natural for the bed of every scheming guy.

LAURA: The all-American girl who was very sure she’d found that special man – but could her transcontinental love affair survive?

Lynn’s writing doesn’t vary from chapter to chapter. We’ll start off with a sentence or two about Plot A, which concerns World Wide Airlines Flight 632 from New York to London, upon which all six characters are stewardessing, and then she will jump back to some random event in the lives of one of her characters. Some of this material will be about the stewardess school they attended in Dallas or, more commonly, will be incidental, random moments in their love lives. And though there is at least one sex scene in every chapter, as mentioned the novel is not very explicit. In each case Lynn is more about the preamble and setup than the actual deed-doing. Here’s a good example:

Robert cupped Cynthia’s breasts in his strong, large hands. He kissed each breast and his tongue pressed against her nipples. He traced his fingers lightly around her nipples. Cynthia ran her long fingernails along his chest then back and down his sides. She leaned down and searched his mouth with her tongue as he pressed against and into her.

That’s about all you’ll get throughout, after which Lynn will write something like, “They made love passionately through the night,” or somesuch. Also from the above you can get an idea of the simplistic, “See Spot Run” type of narrative style Lynn employs. There is on the whole a simplistic feel to the entire book, as if it were written for brain-addled, glue-sniffing children. More damningly though, the book is mostly relayed more through telling rather than showing. In this way it’s reminiscent of later trashy misfires like Taboo and Belladonna.

To continue pissing on the book, I also have to gripe about the fact that very little in it is described. Lynn rarely if ever brings the groovy era to life; description is so minimal as to be threadbare. We’re initially told what each of the six women look like, but it’s mostly reduced to hair color, after which it’s up to us to remember who is who. Locations and settings are seldom described, which again lends the novel almost a child’s book tone. How things look, feel, taste, smell – Lynn is either uninterested or incapable of telling us. The narrative style is as bland as the heroines.

As mentioned the characters have their own varied backgrounds which become confusing; perhaps the central one is that Jennifer, a beautiful redhead, was once in a serious relationship with a World Wide Airlines first officer named Rick, but she broke it off when she discovered he’d briefly been married and even had a daughter, all of which he’d kept from Jennifer. But now as a last-second stew onboard Flight 632 Jennifer is nonplussed to discover that, you guesed it, Rick is acting as first officer on the plane – and meanwhile she’s purposefully been avoiding all of his flights.

But nothing whatsoever is done with this plot, as 632 doesn’t even arrive in London until the last page, and the novel ends on a sort of cliffhanger; the series is clearly envisioned to be sequential, and again comes off like a soap opera in novel form. Instead, more focus is placed on random events in the pasts of these women – like cute little Sandy’s lesbian fling with fellow student Barbara in stewardess school, which Sandy is now ashamed of and wants to forget. But it’s hard to get a grasp of any of this stuff, because each chapter is like a blur of “this happened, and then this happened, but before that this happened, and later on that happened,” until you finally just wish Flanders was dead.

There are only brief flashes amid the chaff. We learn in one of the hopscotching subplots that a dude attempted his own stew cash-in book, to be titled “Stewardesses I’ve Flown,” all about the many stews he’d slept with, but even this is sort of lost in the mire. It would be one thing if Plot A, the flight to London, were given more focus, but about the most that happens is one guy spazzes out and says he wants to go back to New York and first officer Rick comes out and punches him in the face! Flights in the flashbacks seem more dramatic, like one where a stew sees a streaker, and another where a dude tries to hijack the plane to Cuba, only for ol’ Rick, again serving on this flight, to come out and get him soused on free booze.

The New Stewardesses ends just as 632 lands in London, and the various girls are eager to see the city, though we are told via foreshadowing that some of them might not be too happy with what happens here. Lynn desperately dangles a carrot of how exciting and interesting future volumes of the series will be, practically begging us to keep reading. As mentioned I actually have the second one, so here’s hoping it shucks the backstory-flashback nonsense and gets on to some genuine mid-‘70s stewsploitation.
Posted by Joe Kenney at 6:30 AM

Hmmm, don't think I'll pick this one up. Currently I'm reading a book by Ted Mark called "I Was A Teeny-Bopper for the CIA", which has got to be the best title I've seen in a vintage paperback. Have you read any of his stuff? He's surprisingly good, with a quick wit and a real flourish in his writing. He obviously didn't take himself terribly seriously, and yet his writing is solid.
Love the blog. I've been reading regularly for quite some time now and it's one of the few I keep up with when I travel. Those hits from Morocco? That was me.
Keep up the good work!

Sean, thanks a lot for the comment, really glad you are enjoying the blog. Morocco, huh? That's pretty cool. For some reason I've always wanted to go there.

I haven't read any Ted Mark, and generally steer clear of those spoofy '60s spy paperback series, mostly because they're just too spoofy. For example, I just gave up on the first volume of The Man From T.O.M.C.A.T.: The Dozen Deadly Dragons of Joy, by Mallory T. Knight (aka Bernhardt Hurwood). The constant barrage of punny acronyms, goofy character names, and the overal satirical vibe just killed it for me. I prefer my pulp straight with no chaser. Plus the frequent sex scenes, apparently the selling feature of the series, were not only super tame but were played for laughs, too, which resulted in a puzzling reading experience. It all makes me wonder why these spoofy '60s spy books (like the 008 series) go for such high prices on the used books market -- I think people collect them more for the covers than the actual content! Anyway, I know Ted Mark is considered the high point of that particular subgenre, so maybe one of these days I'll get around to his work.

Thanks again, hope you keep enjoying the blog!

Goofy character names? Oh, Ted Mark doesn't go for any of that. Having a villain named Arch Fink and a sexpot called Joy Boxx shows just how serious he is! And yeah, the sex scenes are usually played for laughs in this one. The hero's ex-wife has an almost psychic ability to call him just when he's getting into it.
I live in Madrid, so I go down to Tangier regularly for writing retreats. It's only an hour flight and only costs about 80 bucks. A nice cheap getaway. If you ever do that trip to Morocco, drop me a line and I'll show you around.
Have you ever itemized your vintage paperback collection? I always like reading about other people's libraries, so feel free to do a post on that with some pics!