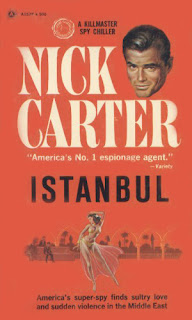 This was only the second volume of Nick Carter: Killmaster by  Manning Lee Stokes, but already we know what we’ll get – an ultra-macho Nick, an overstuffed plot, a good deal of padding, and a helluva lot of random exclamation points. This one’s a bit leaner and meaner than the other Stokes Killmasters I’ve read, and Nick in particular comes off as pretty bad-ass; there’s a part late in the novel where he goes through the wringer, takes a half-second breather, and then goes on the offense.

We’re informed it’s May of 1965, and Nick’s been sent to a D.C. hotel by AXE boss Hawk. Nick is instructed to wear a mask when he enters the darkened hotel room, and there he is briefed by another guy in a mask. This bizarre tidbit is never elaborated on, but the implication is that the masked man is an important politician who wants to keep his identity a secret. There are some parallels to From Russia, With Love in that the masked man references SMERSH, stating that a heroin ring operating out of Istanbul (another seeming From Russia, With Love reference) has its own pseudo-SMERSH execution wing, comprised of four individuals. Nick’s assignment is to go to Turkey, find them, and kill them.

First though, a final boink with Nick’s latest girlfriend, Janet. Nick’s realized the poor girl has fallen in love with him, so we can’t have any of that. Her response to his curt admission that he’s not coming back is excerpt-worthy:

“So that is that,” she said. “And damn you, Nick Carter. But before you leave you’re going to give me something to remember you by! Tonight I want you to do everything to me. Don’t hold off the way you do to keep from hurting me! You do hurt me, you know. I’m too little and you’re too damn big, but tonight forget it. Promise!”

Folks, if I only had a nickel for every time I’ve heard that…

Anyway, Nick heads to Turkey and Stokes does a credible job of bringing the place to life, not hammering us with details. Instead it’s more on the tension and suspense angle, as Nick meets up with the sole AXE contact in Istanbul, a nerdish guy who hero-worships Nick: his name is Mousy Morgan, and he’s clearly coming unglued due to the heavy stuff going on with this heroin ring.

I figured it would be a long haul until we got to any action, similar to previous Stokes installments, but Nick and Mousy are attacked posthaste, as Mousy and a narcotics agent pick up Nick near the Istanbul harbor (where he’s been dropped off by a submarine) and row him to shore. Another boat attacks them, a machine gunner cutting loose. Here Nick employs a new gadget: Tiny Tim, a little metallic ball that’s actually a mini-atom bomb. It’s a bit hard to buy that Nick survives the blast, but what the hell.

From here Nick gets egregious background on the four men he’s to kill: Defarge, Gonzalez, Dr. Six (a former Nazi concentration camp doctor!), and the mysterious Johnny Ruthless, who seems to be more myth than man, but has a penchant for nearly beheading victims with his razor. There’s also Mija, a hotstuff Turkish babe who is a former “hophead” and has gone through the cure and now is helping Mousy take down the ring. There’s yet more seeming Fleming tribute with Mousy’s AXE base being hidden beneath a morgue, with Nick having to pass through a dank hallway with rotten corpses and whatnot – very similar to the underground passage sequence in From Russia, With Love.

There’s the usual random Stokes insanity; for one, to prove that Mija is really a recovering addict and not just a plant, Nick forces the girl to strip, all the way. This while she cries and pleads with him – and mere moments after he’s met her. His objective is to determine that there really are needle marks on her skin, and more importantly no fresh ones. Even crazier is a bit later, when Nick and Mousy go to a club that shows porn flicks, a club frequented by some of the heroin runners, and Mousy dresses up like a woman because only couples can get in. However Stokes doesn’t do much to exploit this, and Nick doesn’t even actually go into the theater – he and Mousy just hang out in the club, on the lookout for their prey.

Stokes got his start writing mystery novels (a la The Lady Lost Her Head), and that’s really the vibe of Istanbul. Nick keeps coming across corpses, ones with their throats slit so savagely that they’ve nearly been decapitated. All clearly the work of Johnny Ruthless, and Nick soon notes the telltale whiff of nail polish remover at the scenes of the grisly murders. Nick still has to figure out the workings of the ring, so he and Mija pretend to be a wealthy vacationing couple, Nick posing as a Southern salesman and Mija as his playmate; another setup that ultimately goes nowhere, save for the expected Nick-Mija coupling – which features more of Stokes’s patented bonkers sleaze:

Nick had forgotten everything in the universe but this red cave into which he must plunge deeper and deeper. He struggled frantically on now in love-hate and tender-hurt with a terrible obsession to cleave and rend and utterly subdue her.

The novel really picks up when Nick and Mija parachute into the no man’s region of Ankara. Mija’s presence is baffling but Stokes explains it away by Nick feeling that the girl won’t be safe if he leaves her alone in Istanbul. There are interesting parallels here to the modern day in that Nick has dropped into Kurd territory, and they are at war with both Syria and Turkey. (I seem to recall someone recently tweeting that this region has been at war for centuries.) And folks the Kurds don’t come off very well at all. In this book they are blood-crazed savages and Nick is very concerned about them, but regardless he disguises himself as one so as to slip into the fold: Gonzalez, the “Basque” uses the Kurds to transfer the poppy seeds, and Nick hopes to disguise himself as one of them for a chance at killing the man.

All this leads to a running sequence in which Nick is quickly caught, strapped to a donkey and sent over a mine field, and somehow manages to free himself, turn the tables on his Kurd captors, and ambush Gonzalez’s caravan. Another Tiny Tim is even employed, Nick once again defying reality by merely burying himself in the desert sand to escape the atomic wrath. But it gets even crazier, because Nick is shot by some Kurd who survives, and Stokes is so caught up in his own escalating pace that he forgets all about this and just has Nick waking up in a hospital along the Bosphorous, a kindly old German doctor at his side, and realizing it’s none other than Dr. Joseph Six. Nick’s in deep shit, because the good doctor is fond of experimenting on subjects.

Stokes would later bring a “Dr. Six” into his John Eagle Expeditor installment Valley Of Vultures (one of my favorites in that series), and there the character was a bit more elaborated. Here Dr. Six is a bit of a buffoon for a Nazi scum villain. He blithely informs Nick that he’s given him an overdose of morphine and Nick’s time is limited. Nick doubts this is true but slowly realizes he really is dying. Here’s where that bad-assery I mentioned comes into play. Dr. Six excuses himself to allow Nick to die alone (his first display of bufoonery) and Nick crawls off the bed, stumbles into the adjacent bathroom, and finds some bath salts in the cabinet. He drinks it, forcing himself to puke – and then drinks his own puke. All to get the morphine out of him.

Then he “accidentally” falls out the window into the Bosphorous below, waking up on the deck of a fisherman’s boat. After the men give him mouth to mouth, Nick jumps back into the water, swims over to Dr. Six’s fortress hospital, and storms the place, looking for revenge. Stokes pulls all this off with aplomb, however it’s a bit goofy that Dr. Six and his colleagues happen to be looking at Nick’s appropriated weapons when the Killmaster sneaks up on them. Even goofier that Nick pretends to be sick and Dr. Six rushes over to help him. But here we get to see gas bomb at Pierre at play, so the climax at least is entertaining.

But it still doesn’t stop. A dazed Nick escapes the hospital, only to almost be run over by a car. True to the genre, a smokin’ hot redhead from America is behind the wheel; she offers to give Nick a ride back to her place. The ensuing sex scene is so rushed over that I had to re-read the part to see that the two actually did have sex. But anyway Stokes is leading us into a surprising, even “shocking” reveal, as the lady has a deadly secret – however not to buzzkill Stokes’s efforts but I’d already seen it coming halfway through the novel.

All told Istanbul moves at a steady clip for Stokes and was probably one of my favorite of his Killmaster yarns. The egregious exclamation points get to be annoying after a while, and per the Stokes norm there’s a bit too much padding and stalling, but overall it’s a fun read, and here for once Nick Carter really lives up to his “Killmaster” title.
Posted by Joe Kenney at 6:30 AM