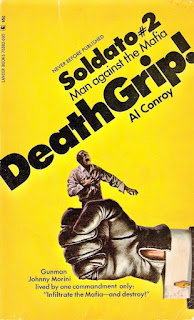 The second volume of Soldato is further evidence that this series is more Parker than The Executioner, and Marvin Albert (aka “Al Conroy”) is more intent on writing a crime thriller than an action yarn. That being said, there’s actually more action here than in the first volume, as Johny Morini, former Mafia soldato (aka “soldier”), is fully set on the path of a full-time mob buster.

It’s a couple months after the previous volume, and Johnny (as Albert refers to him, likely cause it’s easier to type all the time than “Morini”) has become a hardscrabble drunk, whereas he was a driven family man in the previous volume. This is because Johnny’s wife has divorced him after losing the child she was carrying – Johnny figures the miscarriage was caused by all the turmoil she endured. So all that messy business taken care of, Albert has given us a Johnny Morini who is free to become the protagonist of a running series, with nothing to tie him down in his all-consuming quest to destroy the Mafia.

I like the setup Albert has concocted: Johnny is contacted by Riley, returning from the previous volume, where he was Johnny’s handler at the State Dept. But now Riley has gone into the private sector, and his legal services have been retained by wealthy Sicilian immigrant Pannunzio, whose brother was killed decades ago by the Mafia. Now old and enfeebled, dying from leukemia, Pannunzio wants to start dishing the Mafia bastards some payback in the short time he has left. He wants Johnny to be his one-man army and will set up a trust fund, managed by Riley, that will fund Johnny’s efforts for years to come.

Johnny debates the offer for a hot second and takes them up on it (otherwise the series would’ve been even shorter!). His first assignment sends him to Pennsylvania, where the story goes down in more rural environs than one might expect. As with the first volume, this appears to be so Albert can work in the extended “man hunted in the wilderness” setpiece he doled out in the previous book, only whereas it was Johnny hunted by two guys in the desert last time, this time it’s Johnny hunted by two guys in the woods.

But anyway Johnny when we meet up with him again has gone through the trouble of setting up his cover identity with the local yokels, posing as a career criminal looking for a big score – the novel seems to occur over a long stretch of time, at least a couple months, but Albert doesn’t much elaborate. Johnny’s target is Don Vigilante, who operates out of Philadelphia. A big failing with Death Grip is that neither Don Vigilante nor his co-ruler/enemy Don Aldo are presented as being overly evil. In fact I don’t think we ever even get a proper understanding of their criminal enterprises. But regardless, they’re Mafia scum and they must be destroyed.

Johnny becomes friendly with a hot but bitter blonde waitress named Laura who soon engages Johnny in some off-page sexual shenanigans; Albert as ever is not one to get sleazy. He does though bring in just a touch of emotional content (to quote my man Bruce Lee); Johnny drinks to forget about his ex-wife and lost child, the path his life didn’t take. To his credit Albert doesn’t schlock this up with the treacle that would be mandatory in today’s fiction; I mean, it’s not like Johnny’s sadness keeps him from banging hot truckstop tramps. Albert certainly doesn’t dwell on any treacle; Johnny sort of develops feelings for hardbitten Laura, whose ex-husband is part of the local mob, but when Johnny finds out she’s being used against her will to spy on him, he hits the road without looking back.

Instead, the crux of the novel is Johnny being hired by Don Vigilante’s men to get himself a job with Don Aldo’s men, so as to foster discord within their ranks! So basically Albert just writes a variation on the main plot of the novel itself; even Johnny must contain his laughter at this development. So Johnny poses again as a career conman looking to get a little family backup, the same bait that worked for him with Don Vigilante’s hoods. He ends up playing the two sides against each other, starting fights when the opportunity arises. A late subplot has Johnny being requested to take part in a heist run by the sadistic Doyle, known for killing cops and innocents in his jobs, not to mention losing most of his own men.

This part seems to be a fake-out – Johnny learns of the job, which involves a hit on a gem run, then says to hell with it and leaves – but comes back pages later when Johnny rips off Doyle and his sole surviving accomplice. This leads to the mandatory “men hunt Johnny” sequence, as Doyle, bearing an M-3 Grease Gun, and his equally-sadistic comrade, bearing a Garand rifle, hunt Johnny through the woods. Unlike last time, Johnny’s better armed here – he has an M1 carbine and a .38. This is a taut, gripping scene, and I’d say better than the similar one in the previous book, most likely because this one’s much shorter and thus more intense.

One thing that makes this sequence stand out is that Johnny’s a central part of it. There are too many sections of Death Grip where our hero steps aside and lets the criminals do one another away. True, it’s due to situations Johnny’s set up, but at the same time I prefer to see my ‘70s lone wolf vigilante blowing out his own mobster brains, not getting someone else to do it for him. For example there’s a climactic shootout between the two families in which Johnny doesn’t even appear. Instead, it’s back to the “tense” tip for the climax, as Johnny’s ambushed by a couple hoods who have figured out his game and have tracked him down.

This is another effective, taut sequence, playing out in a junkyard of battered and smashed cars. It’s a bit ruined by the deus ex machina appearance of a timed explosive Johnny apparently set up beforehand. But after this justice is again dealt from afar, and Albert stays true to the “Johnny Morini the shadow” vibe, with our hero “fading into a limousine” at the close of this assignment and heading off to the next one. He’s become a man without any real identity except as a mob-buster. Pannunzio, we learn in a brief epilogue, has several more missions planned for Johnny, however Albert would sit out the next two volumes (which would be courtesy Gil Brewer), not returning until the fifth (and final) volume.

And is that a tiny Al Jolson on the surreal cover being squeezed to death by the giant disembodied hand? “Mammy!!”
Posted by Joe Kenney at 6:30 AM