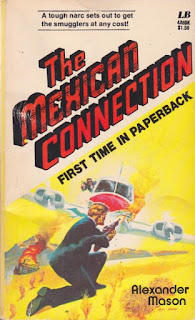 You’d never guess it from the cover, but this Leisure paperback original is a drug smuggling caper in the vein of Night Crossing and High Fliers. (In fact, “High Flying” is the back cover slugline.) I wonder if Ken Barr’s typically-great cover art was commissioned for something else, maybe for the Sharpshooter series, given how it misleadingly presents the novel as an action yarn. That being said, there is a sort of airplane shootout, and a jeep does crash into flames in the desert, so who knows.

No idea who Alexander Mason was; the book is copyright Leisure. There was another paperback credited to him in 1980 (Losers Keepers). My hunch is this was a real writer, maybe someone who shot for the hardcover market, failed, and ended up publishing via Leisure. Because really there’s a world of difference between this and the imprint’s typical books. It’s more of a novel, if you get my meaning, and not something quickly cranked out to meet an editor’s request.

Whereas Night Crossing is a sometimes-humorous buddy smuggling tale and High Fliers is a straight-up comedy, The Mexican Connection is more serious. For this it lacks the charm of the other two, and could’ve used a little levity. Also the rapport of the main characters is nowhere near that of the other two books. On the other hand, this one gives a bit more detail on the drug smuggling efforts of the day, even if it does lack the adventurous spirit one would expect, given that the smuggling entails night flying over the desert with federal agents in hot pursuit.

The novel has an effective opening, though: Steinman, our terse hero, is flying his Piper Navajo over the Mexico-US border when he realizes another plane is chasing him. This leads to an actual aerial gunfight, or at least sort of one, as the other pilot leans out of his window and starts shooting at Steinman’s plane. Later we’ll learn that this other pilot is crazed Federal agent John Roy Corrigan, infamous even among his fellow officers for the lengths he’ll go to enforce the law. Steinman and Corrigan have an intense personal rivlarly, due to the little fact that Steinman blew up Corrigan’s house(!).

Losing Corrigan, Steinman manages to offload the grass he’s flown over the border, then he heads on to his spartanly-furnished home in Barstow. The furnishings match Steinman’s personality; even we readers don’t learn much about him, or what brought him into the drug running biz. A brief background on him lets us know that the novel takes place in 1973 or so; we’re told Steinman began flying drugs in ’69, three or four years ago. His partner is Harry Crane, a guy who in somewhat-confusing backstory got into the biz thanks to someone else: Winnie Secker, a young surfer dude Harry met shortly after Harry got divorced, who made his living selling drugs.

Harry ended up managing the business with Winnie, building it up to the point that he ran everything on his own. Eventually he realized he’d need his own pilot, and this is how Steinman was referred to him. Since then the two have managed the business, with Winnie now relegated to a hanger-on. Also there’s a stigma about Winnie, given how he was recently abducted by Corrigan, who beat him unmerciful in the effort to get info on Steinman and Harry. Winnie was let go, but now Steinman and Harry are uncertain if they can trust him and wonder if he told the Feds anything. Particularly given that Steinman’s recent flight was almost blown – how could Corrigan have known he’d be crossing over at that time?

The titular Mexican connection is a drug dealer named Sanchez, who when we meet him is in the process of killing off his cousin. This is because the cousin was revealed to be an informer, and it was he who blabbed about this recent border crossing, not Winnie. Meanwhile Sanchez is planning a bigger deal: he’s going to heist a million quaaludes and sell them to Steinman and Harry, who figure they’ll make enough money out of it that they’ll be able to retire and go legit. Sadly though this is the sole bit of drug running we get; I was hoping for a few such scenarios of Steinman skillfully piloting a cache of good Mexican grass across the border. But they’ve learned they can make much more money smuggling these quaaludes, so this entails a lot of planning.

In case you haven’t noticed, I haven’t mentioned a single female character. That’s because there isn’t one! Not until the end, at least, and even she is reduced to just a few words and standing on the sidelines while Steinman deals with a traitor. Otherwise there’s no women involved, not even a lame eleventh-hour romance for any of our heroes. Instead, Mason builds up more of a suspense angle, with Steinman starting to believe Winnie is indeed innocent, and that someone else he trusts is really the traitor. To his dismay he will be proven correct, but the only problem is when the confrontation goes down it lacks much drama, given that we’ve barely even seen these two characters together. Hence the reader is not party to the camaraderie and trust that has been destroyed.

While Sanchez is sadistic, he’s no match for the cops, in particular one who is Corrigan’s Mexican counterpart. But the quaalude deal still goes down, and we finally have another aerial chase, with Corrigan again going after Steinman. This eventually leads to a car chase, with Corrigan, having been unable to find any drugs on Steinman’s plane, relentlessly shadowing our smuggling hero, certain that he dropped the drugs off somewhere (which he indeed did). The car chase passes by the San Diego campus of UCLA and eventually ends up with a flaming crashed jeep, as depicted on the cover.

There’s action here and there, and the writing is as stated a caliber above the usual stuff you get from this publisher, but for all that there seems to be something lacking about The Mexican Connection. It’s as if Mason wasn’t sure how he wanted to write his book. It has a great idea, but too much of it is composed of Steinman sulking around, drinking beer, and plotting against people he’s certain are plotting against him. Most inexplicable of all, there’s no feel for the drug world; we’re not even told if Steinman himself smokes dope, and none of these characters have the countercultural flair you’d expect. None that is save for Winnie, who barely appears in the novel, anyway.

All this leads me to believe that Leisure purposely spun the book as “a tough narc versus druggers” action yarn, hoping they’d rope in easily-duped blue collar readers who were expecting to see a bunch of hippies getting their faces bashed in.
Posted by Joe Kenney at 6:30 AM

Ken Barr was one of the most underrated action cover artists of the 70s-90s.
Unfortunate cover art direction often obscured his work (like here) but given room to breathe, like his seven Doc Savage magazine covers for Marvel's b/w series, he was the equal of any of his better-known comtemporaries!

I held this paperback in my hands Saturday at a used bookstore. I didn't pull the trigger on it, though I did walk out with about 20 books.