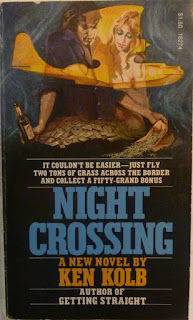 First published in hardcover in 1974 by Playboy Books, Night Crossing is “more than a taut and exciting smuggling adventure story,” per the hyperbolic back cover copy of this paperback edition, also published by Playboy. I wonder what sort of distribution they had, as the book doesn’t appear to have made much of a dent, and I couldn’t find much about it online. As for Ken Kolb, who appears to still be around (and 92 years old, if imdb.com is to be believed), he was a screenwriter with a wealth of credits, and also published several novels.

This one taps into the counterculture scene I’m currently enamored with, telling the tale of a grizzled, Korean war vet, “old” in his 40s or somesuch, getting caught up in the drug scene of the hippie youth. Kolb limits the story to just a few characters and focuses on the snappy patter and comebacks, and you can clearly see his screenwriting roots on display – in fact, it’s a bummer that Night Crossing never made it onto the big screen, as I think the story would’ve translated very easily to film.

Keller is a hard-drinking bastard, quick to get in a bar brawl; we’re introduced to him as he’s ambushed by a pair of local yokels who don’t much appreciate how Keller’s been sleeping with the local women. Keller makes short work of them and gets back to his booze. Keller’s hard drinking is given much narrative importance; we’ll learn he’s been hitting the bottle for the past twenty years, trying to stave off memories of his bombing runs in Korea. Keller’s “murder” of Korean innocents with his bombs is also given much importance, at least in so far as how the hippies keep throwing it in his face.

With his surplus PBY Keller is helping put out forest fires here in a late California summer; in this way he meets Monk, a bald-headed hippie farmer who has a small plot of grass which Keller accidentally drops fire repellant on during one of his runs. This leads to a “hilarious fistfight” between the two, which in turn leads to “one of the strangest, most joyous friendships in modern fiction,” per the back cover. As expected, Keller wallops Monk without much fuss, but Monk basically says “forget about it” and the two become best buds.

The Keller-Monk friendship is the highlight of the novel but unfortunately Kolb keeps them separated for most of the narrative. Instead he opens it up a bit with sections focusing on the other characters, of which Prez turns out to be the most important. A wealthy dealer who only sells marijuana, Prez is looking to make one big deal and then move out of the business, given how things are getting tougher of late – minor mention’s made of Nixon’s crackdown on the Mexico border, and now the feds are really busting drug runners. Our two reps from this front are Rathmore, who takes almost psychotic glee in taking out dopers, and Jordan, a black vet who, much to Rathmore’s dismay, occasionally smokes a little pot to temporarily get into the confidence of whatever dealer he’s about to bust.

So far as female characters go, we get two: Wanda, Monk’s sort-of woman, a blonde who has the expected casual hippie sex thing going with Monk and who promptly lets Keller know she’ll get in bed with him someday. Then there’s Sylvia, Prez’s gal, an auburn-haired beauty who is the spoiled daughter of a senator – Prez’s source of info on the drug war, as Sylvia finds out what’s going on from her dad and then lets Prez know. Kolb doesn’t do much with Sylvia, though, and despite being sort of built up she’s unceremoniously dropped toward the finale, with Wanda being the main female character. No doubt the nude blonde on the cover is intended to be her.

Rathmore and Jordan are taking out Prez’s runners – a memorable opening scene has them chasing down one of them in their armored truck, complete with a Road Warrior-esque mounted machine gun – and in desperation Prez turns to Keller, of whom he’s heard thanks to Monk. It’s instant hate between the two, but Prez promises Keller more money for one flight than he’s made all summer. Plus the dry season has come to an unexpectedly abrupt end, so Keller doesn’t have any income. He takes the job, not entirely happy that part of the deal requires that Monk go along with him, mostly so as to oversea the deal in Mexico but also to ensure Keller doesn’t pull a rip-off.

Keller’s really ticked when Monk demands that Wanda come along as well, but again Kolb doesn’t properly exploit the humorous mismatching of the trio; next we see they’re akk down in Mexicali and Monk and Wanda are high on “cosmic grass” while Keller’s getting in bar fights. Here Kolb delivers a very unexpected fate for one of the characters, but it lacks the impact it might because we haven’t spent enough time with the character who buys it. Around here Keller also finally takes Wanda up on her offer, and surprisingly Kolb gets a bit more explicit than we might expect. But this was the early ‘70s and mainstream fiction was enjoyably sleazy.

The building subplot has it that the Feds know a big shipment’s on the way over from Mexico – indeed, Prez intends Keller to fly over a whopping two tons of grass – but they don’t know who is behind it. Rathmore and Jordan have gone undercover in Mexicali, posing as tourists, looking for the runner they know is soon to arrive. It’s played more for laughs, as even boozer Keller sees right through them. More importantly, it detracts from the menace these two Feds were given in their introduction: there they were chasing down a hapless drug runner in their armored truck, ready to kill if necessary, but here they’ve become bumbling fools.

The climax sees Keller and Prez flying the tons of grass across the border, late at night – and Keller’s decided that now’s the time to finally get high! His senses crystalized by the high-grade pot, Keller plumbs his soul while evading Rathmore and Jordan, who tail them in their own plane, tracking Keller’s PBY by a transmitter they hid on it. This is a cool scene, particularly given how Keller keeps wailing on joints while doing some night flying, but again it’s more on a humorous tip so far as how he and Prez get the two Feds off their tail.

Kolb leaves Keller’s fate an open book – upon their arrival in California, complete with some unexpected surprises, the two men share another joint and ponder their futures. Prez intends to get into a legit business, whereas Keller thinks he’ll go look up Wanda, hanging with some hippie freaks in the Haight. He also knows he’ll have a bit of a struggle against the bottle, but the novel ends with Keller well on his way to being a head instead of a lush. It’s all left open for a sequel, but one was not forthcoming, which is a shame. The characters were likable enough, and Kolb definitely has some skill with dialog and witty rejoinders. But I assume the book didn’t get much attention and Kolb moved on to other things.
Posted by Joe Kenney at 6:30 AM