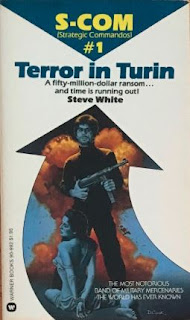 I became interested in this six-volume series, another of Warner’s early ‘80s “Men Of Action” line, when I read about it in Brad Mengel’s Serial Vigilantes. In Brad’s book Robert McGarvey, who served as “Steve White” for all six volumes of S-Com, is quoted in a 2002 Contemporary Authors Online bio as stating that S-Com was nearly “existential” in its approach, with the fifth volume in particular being “a parable on the decay of Western civilization.” So when I came across the first five volumes at a bookstore around seven years ago, each at half off the cover price, I snatched them up…and took my good ol’ time getting to them.

Sadly, the wait was not worth it. Terror In Turin is another Men Of Action misfire, same as other notable blunders like Vengeance Is His, City Of Blood, Alpine Gambit, and Kidnap Hotel. If you wondered why this imprint didn’t last longer, wonder no more – it would appear whoever was editing the line didn’t bother seeking out authors who even understood the genre. Save for Ric Meyers, none of them got it, content to churn out slow-moving banalities in which, most confusingly of all, the protagonists themselves were rendered to supporting character status. Tellingly, in Brad’s book McGarvey is also quoted as stating that he had “scant editorial influence” when writing the books. I’d say some editorial influence was needed, and needed badly.

Anyway S-Com, not to be confused with Z-Comm, is a five-man band under the leadership of impressively-named Stone Williams (the Men Of Action line having this weird in-joke of its main protagonists sharing the same first and last initials as the house author – ie “Stone Williams” and “Steve White”). A trust fund millionaire, Yale graduate lawyer, ‘Nam shitkicker, etc, Stone loved kickin’ ass so much he put together “Strategic Commandos” seven years ago. The team is straight-up mercenary and will only work for half a million bucks, plus expenses. Stone’s cover is he’s a video game designer, which I found humorous – I kept picturing him as a pudgy geek.

The other members of S-Com are pretty much ciphers: Leah Aviv, hotstuff Israeli babe with an intelligence background, her husband having been killed in an op; Myles Benet, a native of Haiti who grew up in the Bronx and served under Stone in ‘Nam; Rod Turnbull, an Australian tough guy who says “fookin’” all the time and is unabashedly racist; and finally Lucky Guerrero, a Cuban who cut his teeth in anti-Castro ops and who eventually found his way into S-Com as the bomb specialist. Only Leah is brought to life a bit; we learn she has a casual sort of thing going with Stone, even though she’s based out of London and maintains a cover as a PR director or somesuch. In fact, Leah is the character who not only brings S-Com onto this case but even insists Stone take the job.

It all starts with a bomb going off in a post office in Turin, Italy, killing several people. Stone watches it on TV from his Manhattan penthouse and fumes, then gets back to working on his video game. For strange reasons, folks, our author decides to focus on the terrorists and their victims, as well as the inept Italian cops, for like eighty pages of the friggin’ text. I’m not kidding. To make it worse, it’s the same conundrum as Kidnap Hotel, in that rather than a big group of terrorist scum our heroes must face, the “main villains” are a young guy and girl who are dedicated members of the Seventh Mao Force. I mean that’s it. Two people, and already from the first page Gina, the sexy babe, is having doubts about this whole terrorism thing, so really it’s up to Teresio, the guy, to do all the lifting. So folks how ever will the five-man S-Com force deal with the awful threat of one single Italian punk who lives in poverty and has to steal food??

At this point I started to wonder what the holy hell was going on at Warner Books. I mean, I respect that they tried to bring the men’s adventure genre back to life; it had pretty much withered away by the mid 1970s – per Mike Newton’s How To Write Action-Adventure Novels, the oil crisis was at fault, due to cutbacks in the printing industry – and other than the Pinnacle Books staples, new men’s adventure series were few and far between. So Warner tried to get the bandwagon started again in the early ‘80s, and that’s cool, but good lord – was Stephen Mertz not available? Or speaking of Michael Newton, how about him? Or even a writer who did these sorts of books in the previous decade, like Mark Roberts? I mean why not hire someone who at least knew what the fuck they were doing??

Instead, Warners hired writers who would’ve been more at home writing for People Magazine or something; writers who had no understanding of this special little genre. And that’s fine – you give ‘em the first several volumes of Don Pendleton’s The Executioner and you make that their “men’s adventure 101.” But apparently no one thought of doing that, either. So like I said, Warner’s at least got it right when they hired Ric Meyers, but otherwise it’s very puzzling how they went about handling this Men Of Action line. I’m not saying this Robert McGarvey is a bad writer, it’s just that he’s awful for this genre – we go for, seriously, 70 or so pages of the most banal bullshit as Teresio and Gina bicker, cause a few more smallscale terrorist atrocities, and eventually kidnap sexy virgin Maria DiGrazia, the daughter of an uber-wealthy Ferrari-type auto designer.

Meanwhile our “heroes” twiddle their thumbs and fret over the news, occasionally calling each other on the phone. At one point Stone even calls them all over to his place for a party or something in one of the lazier “shit, I better show more of my protagonists!” sequences I’ve ever read. It just goes on and on, complete with a building subplot about half-hearted terrorist Gina befriending captive Maria, while Teresio constantly threatens to rape her – mostly so our author can have lots of lurid stuff, like Maria’s “large breasts” jiggling away as Teresio rips off her clothing and paws her. While the Men Of Action line might be lacking in the, uh, action department, one thing I’ve noticed is that they all feature a good helping of sleaze, so at least there’s that. Stone also scores with DiGrazia’s sexy secretary in another fairly explicit scene.

Finally on page 89 S-Com goes into action; Leah in her previous life as an Israeli spy often used DiGrazia sports cars on her jobs, loaned by the man himself, so she basically cold calls the poor guy and tells him he should hire her new mercenary outfit. DiGrazia agrees, so S-Com goes to Italy…where they promptly get in some quick firefights with a Mafia family(!). It’s pretty sad when even the author realizes he’s faced his heroes with an underwhelming foe and so has to come up with a completely new group of them to give us some action material. But then the feeling I always get from these Men Of Action books (save of course for the ones by Meyers) is that the authors consider the “action stuff” to be an inconvenience.

We get lots of stuff of Rod the Aussie shouting about “fookin’ wogs” as he either beats to burger or just plain shoots a bunch of mobsters; we also learn Lucky is skittish about finishing off injured opponents on the battlefield. McGarvey’s action scenes are relatively brief and unexploited but there is a bit of gore here and there. For the most part S-Com just uses MP-5s so there isn’t much gun-porn. There isn’t much of a climax, either; Leah figures out where Teresio is holding Maria and S-Com swoops in, blitzing the shit out of the place from afar. Meanwhile only Teresio’s shooting back at them, Gina now a captive herself, so it’s S-Com versus an emaciated terrorist with a single gun.

Another positive thing I could say about Terror In Turin is that it’s short, but it’s so ponderous and padded that it seems twice as long. McGarvey’s writing is okay, but he has this strange tendency to slip into present tense, which comes off as sloppy – more evidence of that “scant editorial influence,” perhaps. But again this book proves he was another Men Of Action ghostwriter very unsuited to the genre; hopefully he’ll have a better grasp of it in the ensuing volumes.
Posted by Joe Kenney at 6:30 AM

I think the best mercenary novel is "Darakan", by the French author Claude Klotz. It was not translated into English; yes to Spanish: my review here: http://lasestrellassonoscuras.blogspot.com/2016/05/darakan-el-pistolero-de-claude-klotz.html

I completely agree with your review of Terror in Turin; it was a complete waste of time. I have #2 and #3 but I really don't want to put myself through the torture of reading them.