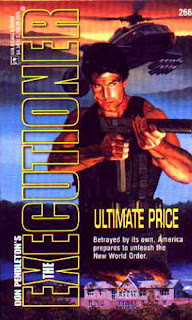 I’d pretty much forgotten all about the COMCON trilogy, that sci-fi horror hybrid thing courtesy short-time Executioner scribe Gerald Montgomery that started with #262: Trigger Point, with its brainwashed teenaged Terminators and its high-tech Nazi cabal bent on global domination, continued with #264: Iron Fist, with its genetically-modified superman and its Chutulluh-esque demons, and now concludes with this tepid climax which has clearly been rewritten by some nervous Gold Eagle editor.

Personally I like to imagine that whoever was editing the Executioner line was on vacation when the first two books in the trilogy hit the bookstores, and upon his or her return nearly had a coronary upon seeing what had been released to the masses – Mack Bolan up against bio-engineered soldiers, sci-fi weaponry, and even demons? Some editorial maneuvering was in order, and fast. Not only that, but let’s end it right now – forget about any and all plans to stretch this “COMCON” stuff out into a multi-volume storyline.

A job like this requires a hatchet, and that appears to be what’s been taken to Gerald Montgomery’s manuscript. Characters are introduced with much fanfare – then dead a few pages later. The COMCON villains, a global enterprise comrpised of former Nazis and their genetically-modified henchmen, are disposed of – all of them – within a few chapters; conveniently enough all of the high-ranking members gather together in one spot so Bolan can blitz them into eternity. The message is clear that someone at Gold Eagle ordered all this nonsense to be ended, posthaste; likely they wanted to just forget about it, so it’s to their credit that they even gave us a concluding volume.

Anyway it’s like a month or two after the previous book – we’re informed later on that Trigger Point occurred in “May” – and Bolan when we meet him is, believe it or not, actually having sex! Humorously, Montgomery doesn’t even bother to inform us who Bolan is screwing; all we get is a mention that someone named “Price” is beneath him. Eventually we’ll learn it’s Barbara Price, apparently the Smurfette of Stony Man or something, I don’t know. Here we get our first taste of editorial tinkering, which surely must be the only way to explain this bizarre passage:

She smelled like a woman untouched by modesty. Her perfume was sweat, musk and hot breath, and [Bolan’s] inner animal responded accordingly. And had been most of the night. She didn’t try to mask the smells God gave her. She practiced proper hygiene but beyond that she was an all-natural woman.

And Mack Bolan was an all-American man.

Sadly they’re interrupted mid-boink by an attack on Stony Man itself – which by the way Montgomery doesn’t much explain or describe, relying on the fact that he’s writing this for longtime readers who know the setup and etc. But for people like me coming into this cold, ie people who only think of the Don Pendleton originals when we think of “Mack Bolan,” I didn’t really know what the hell was what. Not that it much matters, as it’s just your typical Gold Eagle action scene, with “fire teams” running around and shooting at each other with detailed gun descriptions. But this time there are these high-tech black helicopters as well; of course, it’s those wily COMCON bastards, looking to even up the score from Iron Fist.

The Stony Man commandos fend off the COMCON assault, and Barbara Price even gets in on it, wearing a “form-fitting combat blacksuit” and toting a cut-down M-60. Montgomery’s action scenes sort of have a David Alexander flair to them, minus sadly the gore factor. He also goes for more of a military fiction feel at times, sticking to more realistic description. He does occasionally have the movie-style action bit, like when Bolan fires his shotgun at some grenades that have been launched at him, and the buckshot deflects the grenades!

Returning COMCON villain Joe Newport is given more narrative spotlight this time; indeed a bit too much, as he almost takes up more of the reader’s time than Bolan himself does. But this is another indication of editorial tinkering, because Newport is built up at great length – and then his sendoff, which is of coruse expected because this is the finale of the trilogy, is rendered so anticlimactically that you actually have to go back and re-read it to ensure you didn’t miss something. And what’s worse, he and Bolan never even meet! So my assumption is this Newport subplot, which has the former COMCON executive killing off his competitors and reinstating himself as a big guy in the evil organization, was intended to give him more precedence in future COMCON storylines that were never to be.

Newport basically uses Bolan as the instrument of his vengeance, sending him coded intel and hoping Bolan will start blitzing away, doing Newport the favor of getting rid of his enemies. This means that there’s a bit more action in Ultimate Price than in the first volume of the series, but it does come off as padding. Montgomery does manage to call back to the Pendleton glory years, with Bolan going in “Black Ace” mode, ie the role camoflauge he used so successfully – and perhaps a bit too often – in the Pendleton originals. Basically, Bolan poses as a member of the enemy, a rather arrogant, high-ranking one, and the gullible enemy troops buy it hook, line and sinker.

As we’ll recall, COMCON is tied in with FEMA, which in Montgomery’s world is an un-Constitutional construct engineered by former Nazis which, if fully activated, could take over the country. It’s made up of black-suited goons in mirrored shades and Newport gives Bolan phony credentials that allow him to pose as a high-level contractor, hired specifically to take out this current COMCON menace: Mack Bolan. So it’s very much in the Pendleton mold as Bolan, posing as a hired killer, goes around warning a bunch of thugs that Mack Bolan’s on the way to kill them all and they’d better do what he says if they want to live. Even though Montgomery’s Bolan comes off like the cipher familiar from the majority of the Gold Eagle books, lacking the personality of Pendleton’s original, he does here sometimes remind the reader of the real thing.

Bolan’s Black Acery coincides with a bona fide sex-slave auction the COMCON boys are running in a hotel in Vegas, all of them as mentioned conveniently rounding up to bid big bucks on freshly-abducted and midnwashed young women. There’s a bit more of a Pendleton vibe with the brief intro of Gabriel Aquarius, a “turkey doctor of the mind,” ie Pendleton’s term for Mafia sadists who took torture to an art form. We get a peek into Aquarius’s brainwashing tactics, much of this calling back to the first installment of the trilogy, where we saw a few of his subjects at work, activated into killing machines by phone calls.

It’s a bit more lurid than the Gold Eagle norm as these half-nude babes are auctioned off to the highest bidder, Aquarius running the show. We get to see his mind-controlled girls at work again, as during the inevitable action scene Aquarius activates them and Bolan, assisted by Jack Grimaldi, goes out of his way not to kill any of the women. Probably the only novel in the franchise in which someone is carefully knocked out by a helicopter landing rail, or whatever those things are called. Otherwise the scene is of a piece with the other action sequences in the trilogy, with Bolan mowing down legions of “Men In Black.” But it’s all so abrupt and anticlimactic as to be hilarious, particularly given that Bolan here is wiping out the entirety of the COMCON elite.

And that abrupt nature is real hilarious at times – like the spectaculary-inept appearance of Lauren Hunter, the commando spy-babe introduced in Iron Fist. She’s given this elabrate intro, taking care of an obnoxious guy who tries to hit on her, then she fixes her commando beret and checks her gun and storms into the Vegas hotel she’s heard Bolan might be in, prepared to help him take on COMCON – and she’s dead one page later! I had to re-read this part just to see what the hell was going on, but of everything in Ultimate Price I’d say this is the biggest indication of some editorial hatcheting. Lauren Hunter likely was intended to be a big player in future volumes, but must’ve been deemed expendable with the abrupt conclusion of the storyline.

Speaking of which, there’s also the fate of Joe Newport. It’s nearly as ridiculous as Lauren Hunter’s, perhaps even more so, as here Montgomery goes as full into sci-fi as he did into horror in the previous volume (ie the friggin’ demon that showed up at the end). Our favorite villain has reinstated himself into his rightful place as the head of COMCON, bossing around his underlings, and he’s with a bunch of them in one of those ubiquitous black helicopters…then this “zeppelin” thing of farflung advanced, perhaps even alien technology, zaps him out of the sky – “Joe Newport did not like his death. It came much too soon.” If that isn’t Montgomery cursing through the text I don’t know what is.

There is, given all the obvious editorial revising and tinkering, a dispirited air to Ultimate Price. This is a shame because the previous two volumes, in particular Iron Fist, weren’t bad, and promised to take The Executioner in a much different direction. Iron Fist was especially cool in that regard, what with its Hunter Thompson stand-in (a character who is sadly missing this time around).

Montgomery must’ve been willing to try again, though, as a few volumes later he returned with Leviathan, which appears to be Bolan vs. a sea monster. Unsurprisingly, Leviathan would prove to be Montgomery’s final book for Gold Eagle.
Posted by Joe Kenney at 6:30 AM

Joe, would you consider ANY of the Gold Eagles to be up to the standard of the original Pendleton run? I thought the first few, like "Double Crossfire" were close, but then I was 15 at the time. The others I've dipped into ... meh.

Thanks for the comment! I'm definitely not an expert on the Gold Eagle line, but I'd expect there are many that are up to Pendleton's standards. In fact the guy who wrote that "Study of Action Fiction" book I reviewed on here years ago rated Michael Newton's "Prairie Fire" as the best Bolan novel of them all. I'd say the ones by Stephen Mertz and Ray Obstfeld would also be good bets.

Barbara Price is indeed one of the people at Stony Man Farm, the secret base of Mack Bolan and his team during the modern era where he works for the government. She and Bolan have a no-strings-attached friends-with-benefits thing going on where they have sex during his rare downtimes between missions.

I wonder if that’s why the book is called “Ultimate Price”!