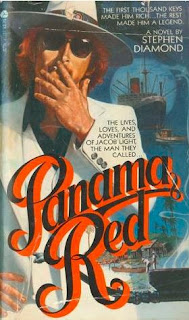 Now here’s one of those fat ‘70s paperback originals I basically yanked off the shelf upon discovering it many years ago in a used bookstore. That cover! That back cover! A tale of a ‘70s dope dealer with exploitative front and back cover copy, including a mention of “outer space weed!” It got pretty much the same reaction from me that Cindy On Fire would a few years later – I was on my way to the checkout line within seconds.

But after that the book sat in a box for like 13 years before I finally got around to reading it…in fact, I’m sure I tried to read Panama Red at least once over the past years, but dropped it, as sadly this is yet another instance in which the actual book does not live up to the cover art, the cover copy, or even to its own potential. For reasons that must forever be lost to us, Stephen Diamond having passed away years ago, our author has taken a story of a pimped-out pot dealer and turned in a slooow-moving tale in the James Michener manner. According to the copyright page, portions of Panama Red had previously been published in 1977, in some underground paper or something, so my guess is this stuff – ie the good stuff that we don’t even get to until the final hundred pages of this 400-page behemoth – was Diamond’s original tale and Avon or some editor asked him to flesh it out to “blockbuster paperback” proportions.

Another red flag, at least for me, is that Panama Red is presented as an “autobiography,” the first-person recounting of Jacob “Panama Red” Light, a German-Panamanian who moves to New York in the early ‘60s, becomes a dope dealer by chance, and over the next several years finds himself a veritable kingpin of hash, initiated into a hippie mafia clearly modeled after real-life group the Brotherhood of Eternal Love. Only those last hundred pages drop the first-person schtick and move into a much-preferable third-person. I say much preferable because Jacob Light speaks to us in a stuffy, convoluted diction that would be more at home in Proust or something – I mean there’s absolutely nothing hip or cool about the guy, and he comes off more like a bore than a dealer pushing “outer space weed.”

So we must endure a grueling opening hundred pages(!) in which Jacob Light recounts to us his history, starting with how his father Solomon Licht, a German Jew born in 1915, escaped Nazi Germany in the early ‘30s and ended up in Panama. After much dithering on this guy’s backstory and all that jazz, including getting married to a native gal, Jacob is born in ’46. On and on it goes, basically a slow-moving novella about hardscrabble life in the slums of Panama after Jacob’s dad dies and eventually Jacob is taken on as a houseboy at a wealthy man’s home, and zzzzz….. Sorry, I dozed off. This goes on for a hundred pages. Of small, dense print – the book is incredibly overwritten.

Humorously, when “Book II” starts up, it’s 1963 and Jacob has moved to New York – and it’s as if the novel has started anew. We learn that hardly any of the preceding hundred pages was necessary – if something comes up about Jacob’s Panamanian past, he’ll just remind us of what happened, meaning we could’ve skipped that deadweight of an opening “Book.” Oh and I forgot to mention, part of that opening was so Jacob could inform us that, due to his mixed heritage, he has the red hair and beard of a German but the dark skin of a Panamanian, all belabored setup for the lame payoff of his eventual nickname, Panama Red – the same name, nudge-nudge, as a famous strain of pot. (Which as I recall even got a shout-out in Apocalypse Now!)

Anyway Jacob gets a job at a bar run by John “The Hat” Trusdale, and after a few boring escapades he’s hired to live in the loft in which Trusdale keeps all the pot for his lucrative side business. Through happenstance Jacob ended up doing a delivery for him, to Trusdale’s sister; here Jacob also met Hannah, a good-lookin’ babe who happens to be a rock journalist. After some off-page good-lovin’ (our author is never very explicit, though he gets a bit more so in the later, third-person section), Jacob’s high as a kite and in love and soon enough he’s like the guardian of the Hat’s stash, doing deliveries and running the business. He also becomes fond of grass, though Diamond leaves the drug stuff less frequent than you might expect; I did get a laugh out of how pot improves the clarity of Jacob’s vision. I must’ve missed that; it just made me tired and unable to follow conversations.

This stuff is what we came here for, but it’s a bit too little, too late; Jacob Light is still much too stuffy of a narrator, and there’s none of the feel of the times. Even as the early ‘60s become the late ‘60s and he’s banging a hippie terrorist-type chick, you more get the feeling you’re reading some bland 19th century novel, thanks to the stodgy prose. It’s not helped by the lack of action – both of the bump and grind kind and the regular kind. There’s a part where Jacob and Trusdale are ripped off, Jacob coming back to his place to find some guys he knows prepared to take his cash, but there’s no tension, no drama…Jacob doesn’t even realize until later that he’s even been in danger. As I say, the character is much too naïve for the book.

Occasionally we see mention of The Royal Road, a near-mythical psychedelic cult that’s sort of a global hippie mafia; again, it’s clearly patterend after the Brotherhood of Eternal Love, which you can learn more about in the great recent documentary Orange Sunshine. But Jacob just dangles this carrot, promising that he’ll get to it eventually. In the meantime we must endure yet another trip to Panama, Jacob reconnecting with his South American past and yadda yadda; honestly folks, a whole swath of Panama Red has zilch to do with the drug trade and just comes off like soapy melodrama. It’s all very puzzling, and I’m certain it’s editorial tinkering, Diamond being instructed to expand his novel and not being sure how to do it. But we get lots of shit about Jacob and his love for Larissa, a Panamanian girl he had a crush on years ago who has now become a Joan Baez-type singer.

So let’s just jump to the last hundred pages, because here Panama Red becomes fairly interesting – and, as mentioned, moves to third-person, though Diamond aribitrarily refers to his protagonist as “Jacob” or “Panama Red,” which is a bit sloppy. The Royal Road, we learn, was founded by Crowley-like mage Robin Rothschild, and is made up of a global network of drug-types who have been initiated into a sort of Thelema-like cult. Oh, and Rothschild has a magic chess set, which we get to see at work at the climax, where it starts glowing and flying around. This last quarter is so much better than the previous three hundred pages, making the reader wish the entirety of the novel was up to this caliber. The plot here becomes Jacob’s quest to legalize marijuana, using the resources and connections of the Royal Road to make it a possibility.

The Royal Road initiation is our first taste of the psychedelic; Jacob smokes some of Rothschild’s strange gold dust and next thing you know the beared mage is shooting bolts of power out of his fingertips. But this touch is soon lost and we’re more into the humdrum business end of legalizing dope in a few countries, Jacob becoming the point man for the whole Panama deal. Diamond also works in a paranoid conspiracy vibe with the cops clueing in to Jacob and figuring he’s the head of this international smuggling ring, setting him up for a huge bust. But we get back to the psychedelic stuff in a bizarro finale in which the elite of the Royal Road, including Jacob, go on an astral trip, leaving their bodies and voyaging into the cosmos – plus we get to see that damn chess set flying around.

It's all weird, wild stuff, but comes off as so separate from the previous 300 pages of tedium we’ve just endured. Even the finale maintains the surreal edge; Diamond has us believing we’re headed for a ‘70s-approved bummer ending, with the CIA poised to blow Jacob’s brains out just as he’s heading off to put the final touches on his international legal marijuana pact…but the driver turns out to be his old pal and thus only pretended he’d take the hit job the CIA offered him, and then apropos of nothing Jacob and Larissa are enjoying a picnic when a friggin’ UFO flies over them and disappears…and that’s it! A weird finale for sure, along the lines of Once Is Not Enough in how out of left field it is.  But, like that Jacqueline Susann novel, at least it leaves an impression.

Anyway, this is one of those novels that just could’ve been so much more. But as mentioned the cover art is great. Here’s a photo of the back cover – the crazy thing is, everything depicted in the painting happens in the novel, but it’s all just so boring. 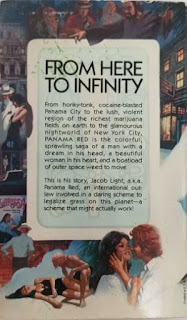 I think if I had spotted this book in a used bookstore I would've bought it, too — if I hadn't read your review first, that is. I can forgive bad, but boring is inexcusable. What a tragic waste of a cool cover. Thanks for the warning. I'll re-read Once is Not Enough instead.