The Aquanauts #6: Whirlwind Beneath The Sea 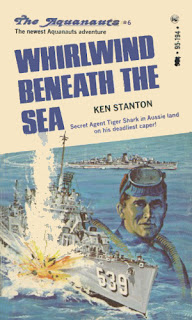 The Aquanauts #6: Whirlwind Beneath The Sea, by Ken Stanton
No month stated, 1972  Manor Books

I continue to ponder what exactly Manning Lee Stokes was up to with his work on The Aquanauts (which with this volume moves over to Manor Books). Once again he’s taken what is ostensibly an undersea commando-type plot and turned it into a lurid crime thriller more akin to the crime paperbacks book packager Lyle Kenyon Engel would later “produce.” And he overwrites to the max; Whirlwind Beneath The Sea comes in at a whopping 220 pages of super small, super dense print.

It’s November, 1970 (meaning this takes place before the previous volume, which was set in February, 1971?), and the titular whirlwind has already occurred before the novel starts; a massive tidal wave has hammered Pakistan, killing half a million people and ultimately killing half a million more in its aftermath. We will learn this tidal wave was accidentally caused by a secret Russian undersea base. It just takes a helluva long time to get there. In the meantime Stokes is up to his usual tricks of padding the story out to unbelievable proportions; the guy’s like the Jimi Hendrix of padding.

For once though Stokes doesn’t bore us with tedious stuff about old Admiral Hank Coffin worrying over this latest caper; to be sure, we do get this stuff, as apparently it’s an integral part of Stokes’s template for the series, but it’s a lot shorter than in previous books. In fact it’s practically streamlined how quickly it goes down; a CIA stringer comes upon a dead Russian frogman in scuba gear among the piles of Pakistani corpses, discovers upon his body a code book, and another CIA worker figures out that this frogman was one of their undercover agents who was trying to get out some important intel before he was caught in an underwater shitstorm.

Well anyway it all leads up to hero Tiger Shark and his handler Captain Greene heading for a “Godforsaken spot” of Australia, where the rest of the novel plays out. The idea is that Tiger Shark will eventually sneak his way via KRAB into the Indian Ocean and figure out what the hell the Russians have been up to this time. He and Greene stay in an old abandoned hotel built decades ago, we learn via needless backstory, by a prospector named “Harry Stokes.” Along with them is the mandatory sexy native babe: an Australian Navy intelligence official named Hillary Green who turns out to be a bisexual nymphomaniac with suicidal tendencies!

As if that weren’t enough, the CIA has also set them up with a notoriously-untrustworthy contractor named Neil “The Walrus” McCreary, who might even be working for the Reds. Officially he’s here for “security” on the desolate site, but really he’s here just to add tension to the narrative. But good gravy is his presence hard to buy, given that from the start he’s fighting with everyone and strutting around like he owns the place. A big muscle-bound bastard who loves to fight, the Walrus is really the hero, or perhaps anti-hero, of the novel Stokes wants to write, instead of this “Aquanauts” stuff – a sleazy crime thriller in which the Walrus plans to get revenge on old flame Hillary Green, who despite being a “sheila” (apparently Australian slang for whore) with an insatiable drive for men, has now gone “lez” and might be having an affair with a Chinese lady who, unbeknownst to Hillary, happens to be a Red China agent. Oh, and Hillary’s being counseled by a sex therapist who is in the midst of having a sex-change operation!

Honestly folks, this is the plot of Whirlwind Beneath The Sea, despite what the back cover proclaims. There’s a part midway through where Tiger, investigating the nuked ruins of the secret underwater Russian base, is abducted and taken inside, and all this works itself out within several pages, whereas the Walrus-Hillary-sex therapist subplot takes up the majority of the conclusion. And also whereas you’d expect that underwater sea base to be filled with, oh I don’t know, maybe a bunch of hotstuff Russian scientist babes just burnin’ and yearnin’ for a male visitor, ‘cause this is one of the few genres that would embrace such a development, instead it’s a dank hellhole with depleting oxygen staffed by a handful of emaciated, half-dead Russian dudes.

Turns out these guys somehow escaped the nuclear blast which destroyed the majority of their habitat and ultimately wiped out a million Pakistanis. Now they’re doomed, their oxygen running low and their own people out to kill them – the USSR wants to prevent the world from finding out they were behind the tidal wave; these scientists were down here experimenting on an earthquake trigger to be used in warfare, but do to miscalculations ended up destroying themselves. Tiger, in I believe the first such scene in the series, takes out a Russian sub that was apparently scouting the area for the habitat, which is now hidden among the rubble. This part features Tiger using KRAB to shadow the sub, evade its torpedos, and then blast it out of the sea; afterwards he discovers the habitat while swimming around in his special underwater suit, but this turns out to be all there is so far as “aquatic” stuff goes. Tiger’s caught by frogmen and hauled inside.

Promptly shackled to a bed, Tiger begins sussing out which of the four Russians he can manipulate into helping him escape. It’s much more in the suspense mold than the action sort of thing you might expect or want. And as mentioned Tiger makes it out in what is just a few pages, Stokes leaving much of the action off-page. It’s memorable, though, with the Russian subs bombing the habitat as Tiger makes his desperate escape with the scientist he’s managed to turn to his cause; a scientist who promises to spill the beans on the world stage and reveal that the USSR was behind the tidal wave. Here also we get to see Tiger’s Sea Pistol in use, in one of the very few such instances in the series; one of the Russians gets hold of it and shoots another, and Stokes mentions lots of exploding blood and bits and whatnot.

And folks that’s it for what passes for the action. From here we’re into a long haul of long-simmering plotting and counterplotting. Here the Walrus takes center stage, and he’s a hateful bastard who plods his way through nowhere Australia, bullying and bossing. He knows something is going on with Tiger and Greene but for security reasons he’s kept out of the loop, but ultimately he plans to sell the info to his Red Chinese contact, who as mentioned happens to be in a hot lesbian relationship with Hillary Green. It does go on and on, and good grief is it sleazy. I mean super ultra sick sleazy, where you start to wonder about Stokes’s mental health.

I’ve mentioned before in a few reviews that Stokes has a predilection for including a scene in which a woman is strangled to death while being raped, or she’ll be raped and then strangled, or, more often, strangled and then raped. Well, Stokes apparently decided to set the bar higher this time. Walrus, wearing a mask, breaks into the office of the sex therapist who counsels Hillary, looking to steal Hillary’s documents to use as blackmail – that Hillary has sapphic tendencies could be disastrous for her military career. But to cover himself Walrus has decided to make this look like a sex crime. And folks…brace yourself. The therapist as mentioned is in the midst of “the operation,” so when it comes time for the rape, Walrus has to go to work on her nether regions with his blade, and then it’s on to the customary rape-strangling we’ve now grown accustomed to in the oeuvre of Manning Lee Stokes…

This stuff is just so over the top that you almost have to shake your head in admiration. I mean despite the fact that none of it has anything to do with something even remotely “aquanaut” in nature, it’s just so lurid and crazy that you kind of don’t mind. Anyway this part with the Walrus is right up there in the “ultra-sleaze” category as the opening pages of Stokes’s later Corporate Hooker. But afterwards we’re back into the tedium; Tiger doesn’t come off too well in the finale, caught unawares and bashed on the back of the head by Walrus, then tied up. Stokes is so deadset on his blackmail subplot that, when Tiger has the expected sex with nympho Hillary, Stokes leaves it off-page and only informs us of it in passing!

In fact, the so-called climax plods on this same course; Tiger, having found a note hidden for him by Hillary, gathers together Coffin and some Australian cops (Greene in the hospital with a broken ankle) and stakes out the Chinese lady agent’s home, waiting for Walrus to show with the Russian scientist he abducted from Tiger – ie the scientist Tiger was able to smuggle out of the now-destroyed Soviet aqualab. Tiger and Walrus get in a rock-‘em, sock-‘em fistfight while another character kills everyone else off-page before turning the gun on herself.

And that’s all she wrote for Whirlwind Beneath The Sea. The main plot – ie the massive loss of life accidentally caused by the Russians – is swept under the carpet, given that there are no witnesses to it, thus the Russians can’t be held accountable on the world stage, etc, etc. But ultimately that plot is just framework for Manning Lee Stokes to indulge in the slick, sleazy crime noir he really wants to write.
Posted by Joe Kenney at 6:30 AM