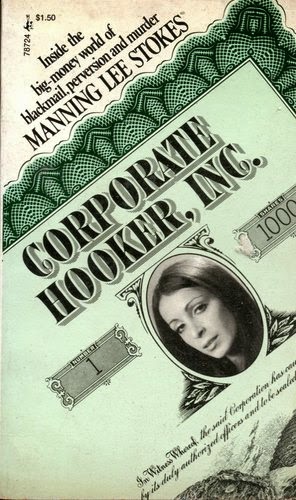 One of the last novels Manning Lee Stokes published before his death in January 1976, Corporate Hooker, Inc. is copyright Lyle Kenyon Engel, the book packager who gave us The Baroness, John Eagle Expeditor, Richard Blade, and many other series, employing Stokes on most of them, the latter two in particular.

Given the title and the fact that it was published by Pocket, I figured this book might’ve been Stokes’s attempt at a Harold Robbins-style trashy novel. And while Corporate Hooker, Inc. certainly is trashy at times, and definitely lurid, it’s more of a crime-suspense tale (a very dark one at that). It appears that at this time Engel was branching out into non-series crime novels, and Corporate Hooker, Inc. was one of them. However the title turns out to be very misleading – I’m assuming as with most other Engel publications, Stokes was given a title and a concept and just did his own thing.

But if it didn’t bear his name, I never would’ve guessed this was the work of Manning Lee Stokes. Other than the occasional stentorian narrative tone or the tendency to pad out the pages, Stokes’s style here is nothing like anything else I’ve read by him. It moreso comes off like Herbert Kastle, particularly Kastle’s mid-‘70s work, like Cross-Country. More particularly, though, I’m betting the novel’s tone and style was inspired moreso by the rough and crude 1970s work of Mickey Spillane.

Anyway, as mentioned, the title is misleading. The novel is actually about the horrific murder of a street-level hooker, and how her death threatens to compromise a well-laid plot to blackmail various bigwigs. It takes a while for the reader to learn this; Stokes instead starts off with the sleaze, as we meet an unfortunate young New York City streetwalker named Rita moments before she is horrifically murdered in graphic and unsettling detail. This murder, which occurs in the first few pages of the book, is in fact so unsettling that not only does it outdo anything in Bronson, it actually made me consider not continuing with the book!

Apparently Rita has attempted to blackmail someone, and word has come down through various channels that she needs to suffer a little. Not die, but suffer. However the two hoodlums who end up with the job are such a pair of sick fuck-ups that they end up accidentally killing her. My friends, this sequence pushes the buttons and then some, as one of the hoods, a sadistic bastard who first makes Rita blow him, proceeds to find a broken broomstick and uses it in the most nightmarishly unpleasant manner possible. The sequence actually raises hackles.

Our nominal protagonist is Detective Tom Banning, a mountain-sized mass of muscle who was once a hero cop but has now been disgraced to serving in “Siberia” (aka Brooklyn) due to problems with alcoholism. Banning is a pure ‘70s pulp cop, taking bribes and graft with ease and working on the side for “The Outfit” (as Stokes, Richard Stark style, refers to the Mob throughout). On the crime scene the next morning, where the cops have discovered Rita’s partially-burned corpse (the hoods having jammed her into a warehouse furnace), Banning is shocked to discover that he actually knows this girl, or at least has seen her before.

Not that Banning tells his superiors; instead, he realizes this dead hooker once had business with Banning’s ex-wife, Ruth Watterston, the 31 year-old Director of PR for Magna Media, Inc, but a high-class madame in all but name. Ruth, “as sharp and amoral as they came,” per Banning’s opinion, oversees the good ship Saracen, a pleasure yacht which plies New York harbor and plays host to publishing world bigwigs, catering to their kinks with a new stable of high-class whores each cruise. (I’ve already checked for it on Expedia, but no luck.)

Ruth is an interesting character – beautiful but merciless, she cares only for material wealth. This is the reason she left Banning so long ago, and due to her business acumen she has risen far in Magna Media, Inc. Plus she’s been screwing the CEO, which always helps. This is Vincent Moretti, one of the mob’s “new generation,” a young Ivy Leaguer who deals solely in the legal elements of the Outfit’s various interests. Magna is Moretti’s jewel, a publishing house that deals mostly in sleaze and porn (their biggest seller a slick mag called Mister which outsells Playboy and the like), but he’s looking to branch out into respectability with the acquisition of Horton House, a literary giant that is on the verge of bankruptcy.

These three characters – Banning, Ruth, and Moretti – have an interesting dynamic, and Stokes constantly plays it up. Despite his impressive bulk and his tendency to bust heads, Banning is a mouse when it comes to Ruth, who can twirl him around her finger. Or as Stokes so memorably puts it, “There were about five billion pussys in the world and he had to get hooked on one.” Banning leaves the crime scene to visit Ruth, earning his keep as one of Moretti’s informants as he delivers early word that the dead girl will no doubt soon be uncovered as once having worked for Ruth and Magna Media.

The opening horrors dispensed with, Stokes proceeds to pad out the tale (the novel runs to 253 pages of smallish print) in his customary style, with the various characters plotting and planning. Stokes sleazes it up once in a while, like when Banning and Ruth get cozy and she marvels once again over the massive “length and diameter” of him (Banning’s size – in all aspects – is constantly hammered home). Gradually the shape of the tale comes together, and it all hinges on an elaborate blackmail scheme Moretti and Ruth cooked up the year before. (The novel takes place in early November, 1973, by the way.)

We learn that Moretti has secretly wired Saracen with the latest in audio-visual bugging equipment, so that all the kinky activities in the opulent staterooms are recorded for later blackmailing. Moretti has used this to commit various swindles, like using the incriminating photos of a pair of incestuous siblings to steal away their paper mills. His method is to anonymously mail his victims slides taken from the hidden cameras, and later demand payment. Of course, why none of these people would suspect that the ship, what with its revolving stable of hookers, is some sort of blackmailing scheme is something Stokes leaves unexplored.

The murdered girl, Rita, was a hooker Ruth employed just once, on a cruise the previous spring. It turns out that she was trying to blackmail one of the Saracen’s more esteemed guests, John Vance. The Saracen is scheduled to disembark on its last voyage of the year on November 3rd, the day Rita’s body has shown up, and Moretti and Ruth are concerned that this will blow the lid off everything – they’ve spent the past year taping and filming their guests in a variety of intimate acts, all of it working up to this final voyage, when they have the most important “guests” on board.

The biggest problem with Corporate Hooker, Inc. is that it’s just damn boring. After the opening sadism, the novel just sort of becomes this character study kind of thing, and nothing much happens. For example, the two hoods who killed the hooker – Stokes doesn’t even bother detailing their fates. We’re just informed that the lower-level boss who hired them hunts them down so as to kill them, permanently shutting their mouths. And the actual Saracen cruise is rendered to one single chapter, a tepid one at that, in which Stokes provides a view into each stateroom, usually delivering the lurid details, like a fat chick masturbating(!) and Ruth engaging in a little lesbiana with one of the hookers.

Instead the novel just comes off as listless as Stokes pads out the pages. Rather than more exploitative stuff we get long sequences of Banning going around and trying to figure out what Rita was up to that got her killed. Eventually he discovers that it was because she was attempting to blackmail a wealthy pedophile named Jon Vance, and further Banning learns that it was a psychiatrist named Roger Draik who was behind the scheme – Draik, acting as Moretti’s go-to doctor for the medical and psychological check-ups of the hookers used onboard Saracen, was thus privy to both the girls and the millionaires onboard.

Even the finale is anticlimatic, with Vance just jumping off the ship before Saracen returns to port, thus conveniently disposing of himself – not to mention rendering most of the plot moot. Instead Stokes focuses on Banning and Moretti, with the latter suddenly deciding that he’s going to kill off Banning. So Banning goes about leaving evidence which will expose Moretti and the Saracen wiretapping scheme, and talks Ruth into leaving town with him immediately, to go live in Mexico. But Banning, the old lush, can’t deny himself one last drink, which leads him into a bender where he eventually decides to go confront Moretti face to face for a violent climax.

Stokes’s writing is good, delivering the usual character introspection and world building. But his tendency to page-fill really hampers the novel. He page-filled in the other novels of his I’ve read, but at least those were shorter. With Corporate Hooker, Inc. you just wish he would’ve come up with something a little more compelling to fill these 253 pages – not to mention that he would’ve delivered a plot more in-line with the title of the book. I mean, I wanted to read a novel about a corporate hooker, dammit!
Posted by Joe Kenney at 6:30 AM