The Aquanauts #5: Stalkers Of The Sea 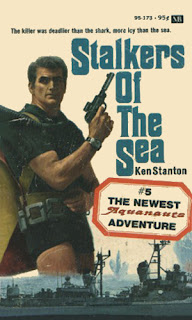 The Aquanauts #5: Stalkers Of The Sea, by Ken Stanton
No month stated, 1972  Macfadden Books

The fifth volume of The Aquanauts starts off with Manning Lee Stokes fooling you into thinking he’s actually going to write a novel about, you know “aquanaut”-type stuff. It opens right on the action, with hero Tiger Shark (aka William Martin) in his KRAB submersible deep in the Gulf of Finland on an espionage mission for his Secret Underater Service; SUS intelligence has it that the Russians are up to something in the vicinity.

Tiger (as Stokes refers to him) discovers what it is – an “experimental underwater dry dock” being built near the Estonian coast, where the Russians will be able to build and repair hunter-killer nuclear subs. There’s even a dummy nuclear vessel underwater to help with the sizing. Tiger gets spotted by a few Russian frogmen and battles them to the death; here he even fires his Sea Pistol, I believe for the first time in the series, and takes out one of them. The other two he kills in a brutal knife fight, after which he barely escapes to KRAB, his scuba tanks out of oxygen.

Then it’s a week later (the novel is stated as occuring between January and February of 1971), and all that stuff is gone and forgotten about; now portly, middleaged Captain Tom Greene, aka Tiger’s direct superior in the SUS, is moping about Amsterdam on some “bitch of an assignment” courtesy SUS head honcho Admiral Hank Coffin. Stokes is up to his old tricks now; the book settles in for the long haul, with lots of stuff of Greene simmering in his hotel room and looking around Amsterdam and griping about the mission. This is a recurring element in Stokes’s novels; each one usually features the main character confused and/or annoyed at his present job, but figuring there’s nothing to do but continue on with it. I swear this is Stokes himself bitching about his current writing job via his characters.

Even though it’s only 160 pages and thus shorter than the previous four volumes, Stalkers Of The Sea has such a measured pace that it actually feels longer. Plus the print’s really small and dense. But I do enjoy Stokes’s measured style, particularly when he as ever indulges in his penchant for oddball sleaze; while checking out the Red Light whorehouse district in Amsterdam, Greene ventures into a strange club that has “electronic whores,” ie plastic women who come to “life” when you press a button on their boobs, and who, if you press some other buttons when you rent them and take them upstairs, can actually have sex.

Not that Greene indulges; he’s more interested than disgusted, so we get a lot of info about this weird shit. Mainly though Greene’s in love with his wife to the point of prudishness. He also just wants to see the job through, which entails him meeting with American-born KGB agent Colonel Yuri Solennikof, sent here by his own superiors. Turns out the Russians have a scientist named Karl Vaganova, who has created this program that will detect every ship on the oceans of the world; it’s called REKORD. Vaganov wants to defect, and the Russians are actually willing to give him up; in return they want an SUS marine biologist named Steffi Kaldor.

We get a lot of stuff about high-roller Solennikof, who admits that he takes testosterone drops to keep it up because he’s past fifty, lording it up as he yaks with Greene. Tiger’s far gone from the action, all that stuff in the beginning clearly there so Stokes could have a little action before his customary treading of the water, so to speak. But something occurred to me this time – for a while I’ve wondered why this series was titled The Aquanauts when there’s only one Aquanaut, Tiger. My assumption is Stokes is in his way actually writing a “team book” sort of series – the titular Aquanauts being not only Tiger, but also his landlocked comrades Greene and Coffin, who engage in all the espionage and schceming while Tiger does the heavy lifting.

Anyway Greene is our main protagonist for the first half of the book, sort of like how Admiral Coffin was the star of most of the previous volume. After interminable, dense-print pages of dialog he even gets in what passes for an action scene; Solennikof is driving them back to Amsterdam when they’re chased by another car. Solennikof is certain they’re after him, not Greene, and besides he’d get in trouble if anything were to happen to Greene, so he drops him off – and Greene watches from afar as Solennikof guns down his pursuers, off-page. Later Greene finds one of them, who happens to be a woman; she’s injured, half-dead, and Greene gets her medical treatment. She turns out to be a goldmine of intel for SUS: her name is Mila Hrouda, she’s a hotstuff 26 year old, she’s Czech, and she’s a former TV reporter turned resistance fighter; she and her comrades were trying to kill Solennikof but failed.

Stokes is up to all sorts of page-filling tricks in this one. Pages 68 to 80 are comprised of a transcript of Mila’s debriefing with Greene, just endlessly digressive back-and-forth dialog that doesn’t do much to advance the plot – we already know Mila and comrades were trying to kill Solennikof, which is pretty much all we’re told (again) here. But as if that weren’t enough, pages 97-108 are given over to the rambling first-person account (in ugly italics) of Steffi Kaldor, all about his past (including random mentions of some floozie he liked to bang) and his escape from Russia and etc – all of it, to be sure, as trivial as could be. But Stokes presents all this stuff as material Tiger is given as part of his assignment dossier; Tiger is to study it, and Stokes must assume we readers too are in the Navy and must also be prepped on everything, no matter how inconsequential.

But for all that Stokes still delivers nice moments here and there, complete with the well-above-genre-norm writing style one expects of him. In particular there’s an enjoyable sequence where Tiger, in KRAB, hovers about the “pelegaic twilight” of the deep sea, mapping sea floor and testing out SYNMIR, a new “synthetic mirage” system KRAB’s been given which camoflauges it from enemy radar and sensor equipment. Here Tiger broods and looks off into the aquatic world and it’s one of the few times Stokes allows him to be more human than the macho cipher he normally is.

Also as per Stokes’s wont, things don’t pick up until the final quarter. It’s now late February and Admiral Coffin has succeeded in getting the NATO sea games held earlier than normal in the North Sea, to provide cover for the defector-swap the Russians are requesting. Also Coffin has figured out the ruse: the Russians, who have their own SUS, are jealous of the American SUS and want desperately to find out about any and all “Tiger Sharks” (of which our Tiger is, so far, the only one) as well as the mysterious KRAB. So this swap they’ve come up with is clearly a sting op to roust out Tiger Shark…yet somehow Coffin still goes along with it?

Who cares, I guess – it at least serves to bring the long-simmer plot to boil. Tiger has Steffi Kaldor in a sort of cryo chamber in KRAB, and must pull it through a few miles of zero-visibility North Sea ocean while Russian hunter-killer subs surround him. And there’s Solennikof, with a few Russian frogmen, overseeing the swap. But when Tiger gets back to KRAB with Vaganov, in his own cryo chamber, he discovers that there’s a homing beacon on him. Not only that – Tiger gradually figures out that the Russians have implanted a beacon and an explosive in the still-unconscious man’s chest cavity.

The finale is a taut affair with the Russian subs hounding KRAB and Solennikof broadcasting, via laser beam, messages that Tiger must surrender himself or KRAB, or Solennikof will blow them both up. Failing that, the bomb in Solennikof is wired to blow in 9 hours. Tiger takes his only option and again proves his bad-assery. He sends KRAB off on a round trip and goes out in his special scuba gear, taking out the Russian frogmen one by one. Solennikof is dispatched almost perfuntorily, blown apart by Tiger’s Sea Pistol – which, we learn, is a one-and-done weapon, but it’s dart actually explodes in the “second stage” of impact. Here we get one of Stokes’s gorier deaths, complete with descriptions of Solennikof’s lungs and intestines blasting out.

Only it turns out it wasn’t Solennikof; when Tiger later gets back to KRAB, there the wily Russian’s voice is again. The man Tiger killed was a decoy. Indeed, Solennikof survives the tale and, according to the proprietor of the essential Spy Guys And Gals site, he will return in the 8th volume. Tiger kills more frogmen in brutal underwater combat, stealing their air due to the slashed hoses of his tanks, yet for some odd reason Stokes leaves Tiger’s escape off-page, and picks up a few hours later with our hero safely onboard the Poseidon while a combat doctor successfully removes the bomb from Kaldor.

Stalkers Of The Sea moves pretty slow. Other that is than the opening and closing sequences with Tiger Shark. Otherwise this series has yet to really ramp up. Oh, and perhaps you’ve noted something that’s missing from this review – the sex!! Believe it or not, folks, this is the first volume in which Tiger does not get laid, and other than those “electronic whores” (which we don’t even get to see in action), Stokes for once doesn’t indulge in the bizarro sleaze we expect of him. Bummer!
Posted by Joe Kenney at 6:30 AM