The Man With The Getaway Face (Parker #2) 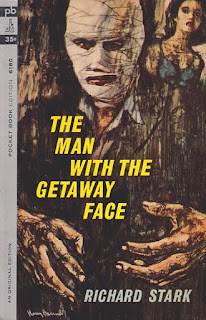 The Man With The Getaway Face, by Richard Stark
No month stated, 1962  Pocket Books

The Parker series continues with this second novel that’s a bit shorter than the first. I actually read The Man With The Getaway Face a few years ago, after The Hunter, but refrained for some reason from reviewing it (same as I did for The Outfit, which I’m about to read again and review this time). I’ve been meaning to get back to the series, and figured I should start over again – but this time I actually listened to it.

Surprisingly, all of the Parker novels have been given unabridged audio versions; the first few are read by a voice actor named John Chancer, who does an admirable job of capturing the various voices in the novel. He especially excels at capturing the gruff voices of oddball crime-world lowlifes. He gives Parker’s voice a bit of a Clint Eastwood edge, very gravelly and terse. That being said, Chancer’s narration sometimes is a bit too melodramatic, but I figure that’s just natural – I don’t think it could be possible to make your living as a voice actor and not be a little melodramatic. But still though, I feel that the narration, at least when filtered through the narrow prism of Parker’s viewpoint, should be cold and terse as Parker himself.

This one opens just a few weeks after The Hunter; Parker is in a sanitarium run by a doctor who was blackballed for being a Socialist. Parker’s had facial surgery and spends about one or two sentences looking at his new face, accepting it with almost a Zen resolve. Shortly after this Parker gets involved in a job in the New Jersery area that’s being “masterminded” by a slovenly fellow crook named Skimm. Really though the job has been “fingered” by Skimm’s girlfriend, a scowling, unattractive diner waitress named Alma – as if proving these books don’t have the usual pulp-crime trappings, Alma is not the expected sultry babe. In fact she’s downright annoying.

But Alma’s come upon a nice heist setup; an armored car goes through her diner and without fail the drivers always stop in to take a leak. Someone could pounce on this, take the car and the thousands of dollars in it, etc. Also involved in the heist is a fellow criminal named Handy, one Parker has worked with before and whose professionalism Parker respects. Parker isn’t crazy about Alma because she’s new to the heist world and could cause potential problems. He’s also certain she’s planning to doublecross everyone, and Handy agrees. Thus the two go about plotting their own doublecross, Parker also bankrolling the job by buying a couple trucks of their own, guns, etc.

Honestly, this one is so pointlessly padded that it’s comical. The Man With The Getaway Face was the first series novel Stark/Westlake wrote, as The Hunter was intended as a one-shot in which Parker was arrested at the end. But in this sequel, Stark shows all the signs of a prolific writer quickly filling the pages so he can get to the next paying gig. Things that should be described in a few sentences go on for pages. If Parker goes to buy a truck, we have to read every struggle with the gear shift, we have to read the endless haggling with the seller, on and on. The book loses all the forward momentum of The Hunter.

To make it worse, the heist is almost anticlimactic, over and done with in a few pages, as is the uncovering of Alma’s treachery – Parker disposes of her off-page. Rather, the brunt of the novel is given over to this tedious subplot concerning Stubbs, the slow-witted chaffeur of the plastic surgeon at the beginning of the novel. As the previous novel cut over to focus on Parker’s prey, Mal, for a “book” of his own, so too does this one cut over to Stubbs. And boy is it ever more indication of the padding of this novel…lots of useless backstory about Stubbs, how he methodically goes about his hunt for the patient who killed his boss. Stubbs you see showed up before the heist went down, cornering Parker, as Parker is one of Stubbs’s suspects – the doc was killed shortly after Parker left.

So we get all this annoying stuff about Parker locking Stubbs up in a farmhouse and daily checking on him, letting him out to walk, etc. As if that weren’t bad enough, we later have to double back and read how Stubbs escaped his prison, and how he continued on with his quest for the doc’s killer. It just goes on and on. To make it worse, Stubbs is killed at the end of his sequence, in as anticlimactic manner as the heist was rendered, and thus all that background stuff we read about him is rendered moot.

Then we double back again, and now read as Parker, post-heist, discovers that Stubbs has escaped and thus goes about finding him. This entails another trip to the sanitarium, where Parker must patiently explain his innocence to May, the cook, and her two equally-moronic comrades, all three of whom distrust Parker. “Patience” is the operative word here for the reader, too; Parker recaps again and again for the morons stuff we readers have already read and already know. But finally they tell Parker who Stubbs’s other suspect was, and off Parker goes in pursuit. He catches up with him just as he’s been shot by his prey, and Parker dispenses justice.

But there are more pages to fill, so back Parker goes to the sanitarium, where he again explains himself to the three dimwits, who finally relent and believe Parker isn’t the killer…oh, but they’ve already let it out on the undeworld wire what Parker’s new face looks like. Thus this entire endless goddamn subplot has been a total waste of goddamn time!! Rather than wasting all three of them, Parker just leaves in disgust – that is, after he’s shown them the severed head of the doc’s killer, which Parker’s brought along in an overnight bag. Now he figures he’ll head to Florida for a brief vacay before taking his fight directly to the Outfit. Mercifully, the end.

I know this book has its supporters, and I know later books are better – several years ago I read Slayground and Plunder Squad, and the other year I read The Outfit, which I’m about to read again – but as far as I’m concerned The Man With The Getaway Face is an overly-padded dud. Parker loses much of the bad-assery he displayed in the previous book; his over-explanations to May and the others comes off like wheedling at times. I mean, this is the guy who accidentally killed some random Outfit whore the previous book by binding her mouth, realizing too late she was asthmatic, and just brushed off the death as an inconvenience. Yet here he is explaining himself and his actions to a trio of dullards and then letting them live despite the fact that they ruined the entire reason for his extensive facial overhaul.

Don’t get me wrong, though; the writing itself is good, with that same economical feel I love in these vintage crime novels. The stuff with Parker getting his guns and all makes you expect some fireworks, but unfortunately there is none – he does shoot one of May’s comrades in the arm, though. We also get more of a glimpse into Parker’s life outside of his crime pursuits; he likes to hang out in Florida and screw a bunch of willing babes. Speaking of which, Parker actually gets laid, this time; two whores he picks up in two separate cities, banging each of them off-page. We also learn he’s still simmering from the loss (not to mention the treachery) of his wife in the previous book.

Well anyway, The Man With The Getaway Face at least keeps your interest so far as you want to see it through so you can continue on with the series. But man is a whole huge chunk of it ultimately pointless. There are Parker fans though who doubtless rank it as one of their favorites, which brings us to the Moonraker conundrum. It has an awesome cover on this original Pocket edition, though.
Posted by Joe Kenney at 6:30 AM

Yeah, while the prose is always a highlight I found the first three Parkers good but kind of over-rated.
The series really does get better and better with highlights being the utterly wonderful The Seventh, which is ruthless, clever and almost perfect, and The Sour Lemon Score, in which Parker's heist gets screwed up in so many ways it almost drives him nuts.
Stick with this series. It's one of the all time greats.

I agree with you about this book...I was so disappointed it took me years before I returned to the series (which I'm glad I did)...Dan J..Marlowe's The Name of the Game is Death and One Endless Hour are a similar and better one two punch, but the later entries in the series are not up to the standard of the later Parker books...

This may have been the first Parker I read and thought it okay but not great. I definitely like the later books better (or the first one.)

Yeah, as I recall, he does explain that he doesn't want to kill them just because he doesn't want to start solving every problem with murder and end up in the electric chair, but, I mean, rally, he could certainly have tossed 'em a good beating.